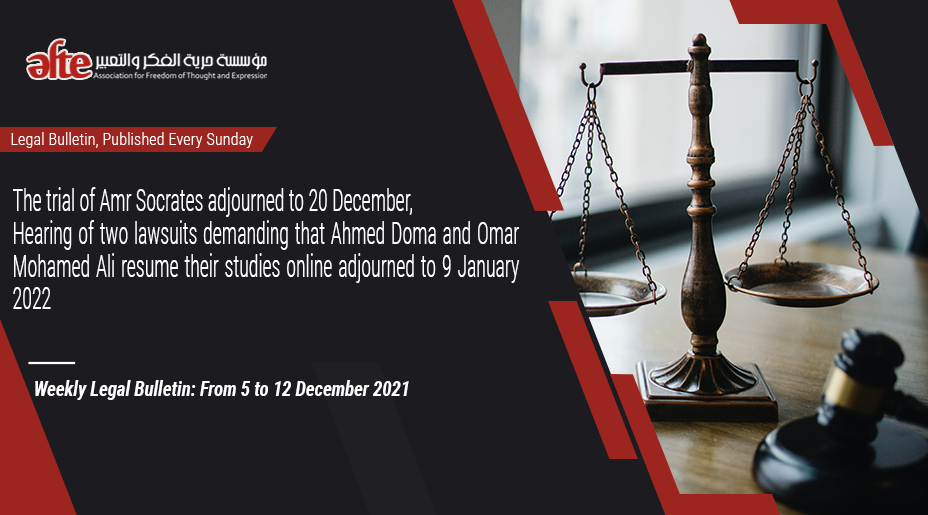 The precautionary measures oblige the defendant to hand himself over to the police station in his neighborhood for several hours, on specific days every week.

The events of the abovementioned case, known in local media as “Ultras White Knights Case”, started when several fans of the Zamalek football club attempted to revive the Ultras’s activities. The security forces arrested the suspects at sporadic times and accused them of joining a group established in violation of the law.

On 6 December, the Criminal Court (The Council Chamber) decided to renew the detention of Assistant Professor at the National Research Center Hamed Sedeek for 45 days, pending investigation into Case No. 1356 of 2019 (Supreme State Security).

Sedeek is facing charges of joining a terrorist group, spreading false news, and misusing social media. Case No. 1356 of 2019, in which Sedeek is involved, also included activists Alaa Abdel Fattah, human rights lawyer Mohamed al-Baqer and Mohamed Oxygen before they were recycled into another case and referred to exceptional trials before the Emergency State Security Court.

On 7 December, the Criminal Court (The Council Chamber) decided to renew the detention of Belal Abdel Razek and to renew the precautionary measures imposed on Mohamed Gaber Soliman El-Masry for 45 days.

This came in connection with Case No. 488 of 2019 (Supreme State Security Prosecution), in which Abdel Razek and El-Masry are charged with joining a terrorist group and promoting its goals, spreading false news, and misusing social media.

On 6 December, Belbis Misdemeanors Court decided to adjourn the trial session of Amr Mohamed Mostafa, known as “Amr Socrates”, to 20 December to enable the defense to review the case papers and to include the report book of Belbeis Police Station.

The South Zagazig Prosecution referred Socrates to trial in connection with Case No. 24382 of 2021 (Belbis Misdemeanors), on charge of possessing publications that promote a terrorist group’s ideas.

Security forces arrested Socrates on 6 November while submitting his military recruitment papers. Three days later, he appeared before the South Zagazig Prosecution, facing charges of joining a terrorist group and possessing publications that promote its ideas.

On 7 December, the Administrative Judiciary Court (The Sixth Circuit) decided to adjourn to 9 January 2022 the hearing session of the two lawsuits filed by AFTE on behalf of Ahmed Doma (lawsuit No. 5057 of 76) and Omar Mohamed Ali (lawsuit No. 5050 of 76) to replace the appealed administrative body.

In the two lawsuits, ِAFTE demanded that Doma and Ali be allowed to resume their studies by attending online lectures through the Prison Authority Sector’s digitally equipped halls inside prisons during the current year. The Prison Authority had earlier cooperated with the Ministry of Justice to hold several detention renewal sessions online through these halls, where defendants were present and judges considered their detention orders. This proves that the Prison Authority has the capabilities and equipment necessary for facilitating the appellants’ resumption of their studies.

This came against the backdrop of Nada’s articles in which he criticized shortcomings at Cairo University, including several financial and administrative violations, supported by documents. Nada was referred to the Disciplinary Council that held its first session to review the disciplinary lawsuits filed against him, which carried numbers 14, 15, 17, 18, 19, 20, and 21 of 2021.

The session’s adjournment came upon a request by Nada’s defense panel to get access to the complaints lodged against him, in addition to the referral decisions and investigations. The Disciplinary Council accepted the request and decided to adjourn the session.