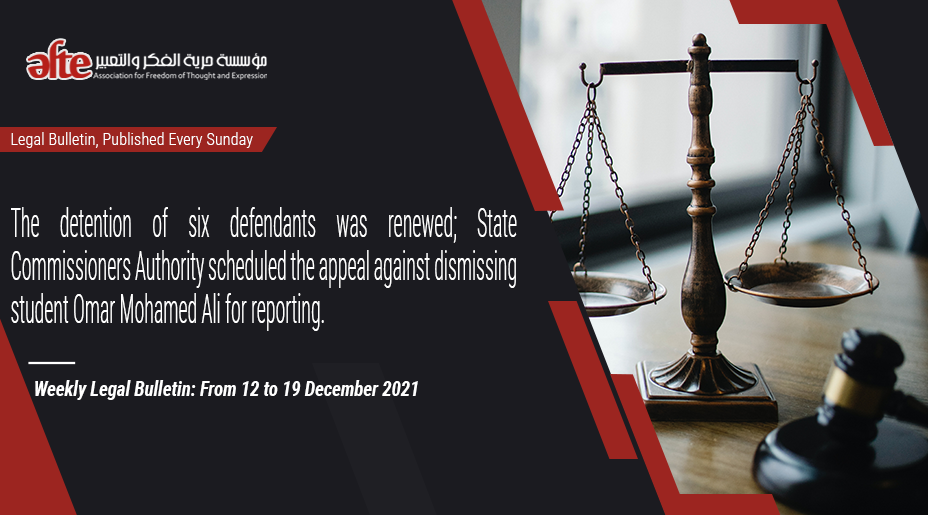 The Criminal Court (The Fourth Circuit Terrorism) renewed the detention of Mohamed Salah and Ahmed Yousry Ghaly for 45 days in connection with Case No. 855 of 2020 (Supreme State Security). On Sunday, December 12.

After eight months of pretrial detention, the Criminal Court decided to release him; however, the Ministry of Interior refrained from executing the order and detained Salah illegally for over a month; he was rotated in connection with the current case. The reason for his arrest comes against the backdrop of blogging about activist Esraa Abdel Fatah’s arrest incident.

While security forces broke into the house of engineer and former member of the Al-Dostor Party “Ghaly” on August 25, 2020, against the background of publishing a Facebook post.

On Sunday’s December 12 session, The Criminal Court (The Council Chamber) renewed the detention of The Head of Language Audit Department at The Bibliotheca Alexandrina Kholoud Saied Amer for 45 days in connection with Case No. 1017 of 2020 (Supreme State Security).

Security forces arrested Amer -who’s been detained for 18 months- on April 21, 2020, from her home in Alexandria, after a week of illegal detention. She appeared before the prosecution in connection with Case No. 558 of 2020. Her release order was issued on December 13, 2020, but wasn’t implemented. The following month she was rotated in connection with the current case with the exact previous charges of joining a terrorist group and spreading false news.

The Criminal Court (The Council Chamber) renewed the detention of Mohamed Mamdouh Abdel Halim for 45 days in connection with Case No. 855 of 2020 (Supreme State Security).

Notably, Abdel Halim was accused in Case No. 1331 of 2019 (State Security) with charges of joining a terrorist group, spreading false news, and misusing social media. The Criminal Court decided to release him with precautionary measures on November 3, 2020, but the decision wasn’t implemented, and he was rotated in connection with the current case with the exact previous charges.

On Monday’s December 13 sessions, The Criminal Court (The Council Chamber) renewed the detention of lawyer Mohamed Ramdan for 45 days in connection with Case No. 910 of 2021 (Supreme State Security).

The current case is the third case in which Ramadan is accused, as he was rotated in connection with several cases since his arrest on December 10, 2018, on a charge of joining a terrorist group against the backdrop of sharing a photo of himself featuring his solidary with the yellow vest protests in France back then.

The Criminal Court (The Fourth Circuit Terrorism) renewed the detention of Ahmed El-Toukhy for 45 days in connection with Case No. 955 of 2020 (Supreme State Security Prosecution).

El-Toukhy headed to the National Security Premises, on September 26, 2020, based on a phone summon. The thing that the investigation authority denied, as it was mentioned in the case report that he was arrested through ambushes near his house to capture him, he was subjected to illegal detention for 20 days till he appeared before Shibin El-Qanater prosecution, which decided to detain him in connection with Case No. 532 of 2021, and on March 21 of the current year, the Criminal Court issued a decision to release him; however, the decision wasn’t implemented, and he was rotated in the current case.

On Sunday, December 12, the State Commissioners Authority decided to schedule the appeal filed by AFTE against the decision to dismiss the third-year architecture student Omar Mohamed Ali from Thebes Institute, to prepare its report with the legal opinion.

The appeal bears No. 57029 of 74 against both the Minister of Education and the Dean of Thebes Higher Institute for engineering in their capacity. The events of the lawsuit date back to when the student – convicted in connection with the case. No. 174 of 2015 (West Cairo Military Felonies) with life imprisonment at Tura Prison- Submitted several requests to Thebes Institue’s administration to use his legal right to resume his studies at the Institute and take his exams inside his prison; however, the Institute’s administration was intransigent and rejected his requests, which prompted him to file a lawsuit to enable him to take his exams inside the prison before the Administrative Court; the Court issued its verdict accepting the appeal to allow the student to take his exams inside the prison while implementing the judgment he discovered that Thebes Institute decided to dismiss him permanently for dropping out of studies.

AFTE demanded the Administrative Judicial Court to accept the appeal in form and stop the implementation of the decision to dismiss the student from the Thebes Higher Institute of Engineering and cancel it.