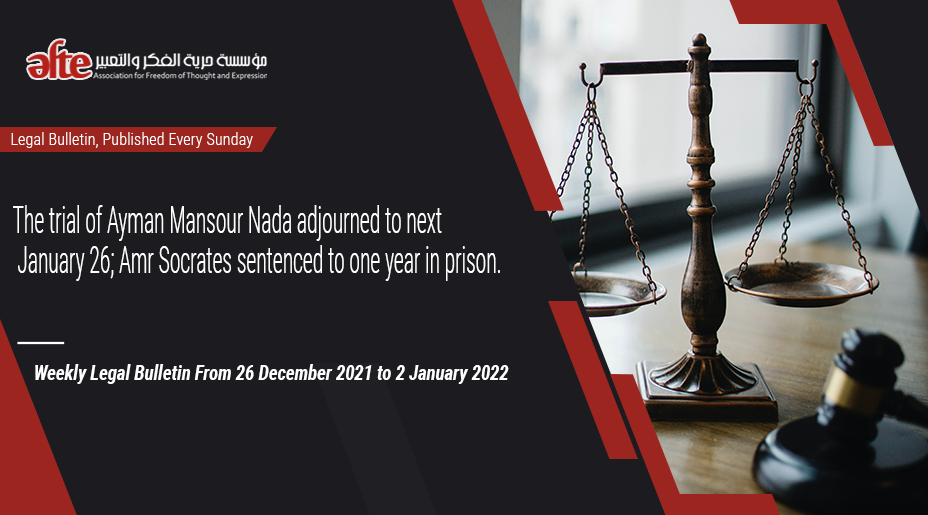 The trial of Ayman Mansour Nada adjourned to next January 26; Amr Socrates sentenced to one year in prison.

On Monday, December 27, 2021, The South Cairo Criminal Court decided to adjourn the trial session of Ayman Mansour Nada -the head of the radio and television department at Cairo University’s Faculty of Mass Communication- in connection with Case No. 9840 of 2021 (the 5th settlement Misdemeanors) to the session next January 26 for the pleading preparation.

Nada faced charges -over articles published on a Facebook account attributed to him- of publicly and maliciously publishing false news about Egyptian media that would disturb public peace and harm the public interest. He also faces charges of insulting the Supreme Council for Media Regulation (SCMR) by describing it as a tyrant and insulting the National Press Authority and the SCMR head Karam Gabr. Nada was also charged with insulting SCMR members Rania Metwally Hashem and Abdel-Sadiq Muhammad Abdel-Aziz, and director of the media syndicate Tariq Ali Mohamed.

The South Zagazig Prosecution referred Socrates to trial in early December on a charge of possessing publications that promote a terrorist group’s ideas.

Security forces arrested Socrates – for the second time- on November 6 while filing his recruitment papers; later on, after three days, he appeared before the South Zagazig Prosecution, against the backdrop of charges of joining a terrorist group and possessing publications that promote its ideas.