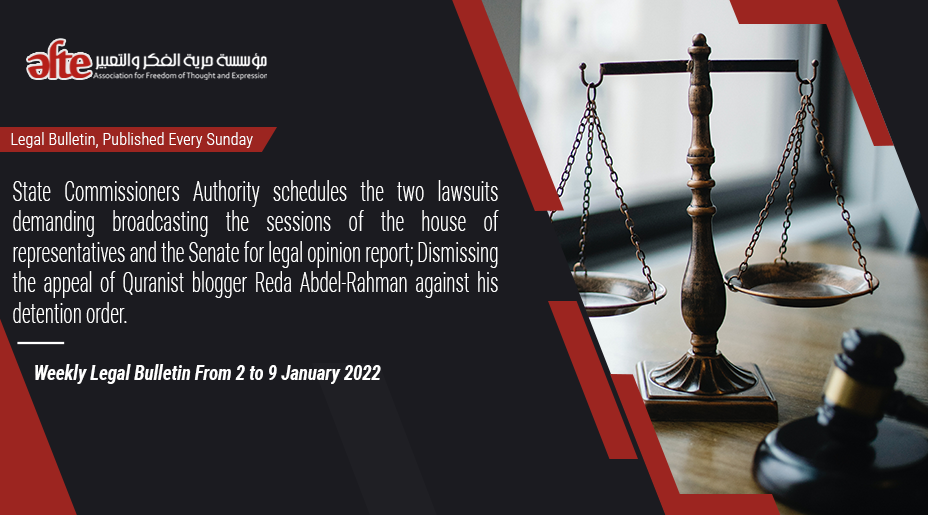 State Commissioners Authority schedules the two lawsuits demanding broadcasting the sessions of the house of representatives and the Senate for legal opinion report; Dismissing the appeal of Quranist blogger Reda Abdel-Rahman against his detention order.

On January 2, The State Commissioners Authority (Second Circuit) of the Administrative Judiciary Court decided to schedule the hearing session of the two lawsuits filed by AFTE’s lawyers against the House of Representatives and the Senate speakers. To prepare a legal opinion report.

AFTE filed the two lawsuits on May 2021, before the Administrative Judiciary Court, Challenging the negative decision not to broadcast the parliamentary sessions on television and digital platforms and refraining from archiving the transcripts of the sessions or publishing them in the Official Gazette or digitally. The first lawsuit filed against the speaker of the House of Representatives carried No. 46322 of 75, while the second, filed against the speaker of the Senate, carried No. 46319 of 75.

The two lawsuits are based on Article 120 of the constitution, which states that “the sessions of the House of Representatives shall be held in public. The House may hold a secret session at the request of the President of the Republic, the Prime Minister, the Speaker of the House, or at least twenty of the House members. By the majority of its members, the House shall decide whether the discussion in question is to be conducted in a public or a secret session”.

In its lawsuits, AFTE stressed the importance of ensuring multiple forms of making the parliamentary sessions available to the public by broadcasting them on television, posting them on the official websites of the House of Representatives and the Senate, and publishing them in writing in the Official Gazette. AFTE believes that making these sessions available would guarantee public oversight over MPs and would enhance the political participation of citizens. Voting in parliamentary elections is usually based on knowledge of the MPs’ performance and the different positions of political parties, which would be enhanced by following up the sessions of the two chambers of parliament.

To read the lawsuit demanding the broadcast of the House of Representatives sessions, click here.

To read the lawsuit demanding the broadcast of the Senate’s sessions, click here.

On Wednesday, January 5, Zagazig Criminal Court decided to dismiss the appeal filed by Quranist blogger’s Reda Abdel-Rahman defense against the decision issued previously by the Criminal Court to renew his detention for 45 days in connection with Case No. 3418 of 2020 (State Security Emergency Misdemeanour).

Abdel-Rahman faces several accusations, most notably joining the terrorist group ISIS, Adapting and promoting Takfiri ideas through the organizational papers seized at his house on August 22, 2020.

Abdel-Rahman denied all the charges against him during interrogation; he stated that the police force that arrested him didn’t search his house but only seized his mobile phone. He stated in the investigation report that he was detained throughout his disappearance period in the Police Department of Kafr Saqr.