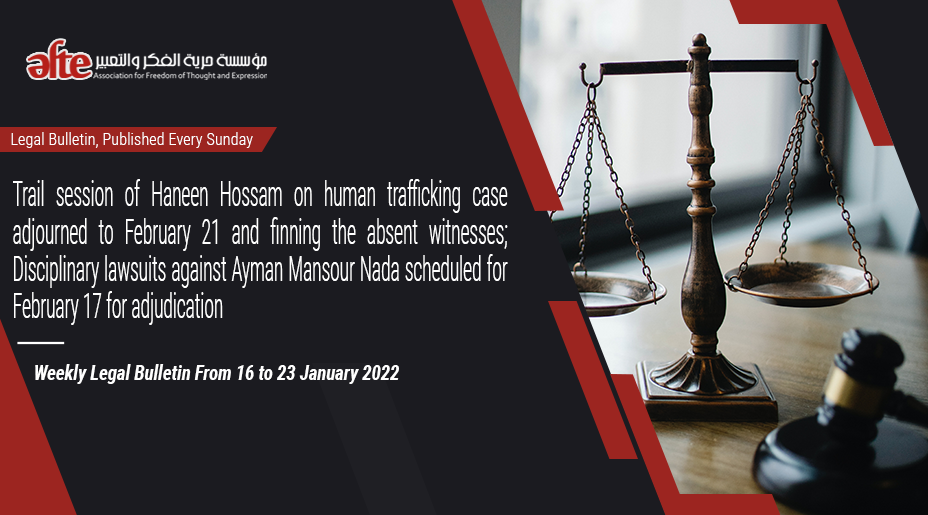 On January 18, the Criminal Court (Circuit 15 South Cairo) decided to adjourn the trial session of Haneen Hossam in connection with Case No. 4917 of 2020 (Sahel Felonies), restricted to No. 2106 of 2020 (North Cairo), known in the media as the human trafficking case, to next February 21.

The Court’s decision to adjourn the session was for calling the rest of the witnesses, as Hossam’s defense demanded the Criminal Court in the penultimate session to hear the witnesses of the girls that Hossam contacted on the WhatsApp group in order to work with her at Likee, the court also decided to fine who did not attend the session of the witnesses with 500 Egyptian Pounds.

Notably, The Court of Appeal issued the decision to retrial Hossam, given the verdict issued against the accused in absentia on June 21, by the Cairo Criminal Court, to 10 years in prison and a fine of 200,000 pounds.

The Public Prosecution charged Hossam with human trafficking and commercial exploitation of children; given after she posted a video clip in which she called on girls to use a video sharing app and show their multiple talents to create content for display to followers, thus making money that might increase if the number of followers increased.

On January 16, The Disciplinary Council of Cairo University’s teaching staff decided to set the date of disciplinary lawsuits against Ayman Mansour Nada, the head of the radio and television department at Cairo University’s Faculty of Mass Communication, for adjudication to next February 17 session.

The Disciplinary Council reviewed disciplinary lawsuits No. 14, 15, 17, 18, 19, 20, and 21 of 2021, held against Nada on the backdrop of writing articles on Facebook criticizing Cairo University and several financial and administrative violations supported by documents.

It should be noted that Cairo Appeal Prosecution decided to release Nada in connection with Case No. 23 of 2021 (limiting Cairo Appeals), in which he faced charges of insulting the president of Cairo University and several university officials and using his account on Facebook to commit the crime.