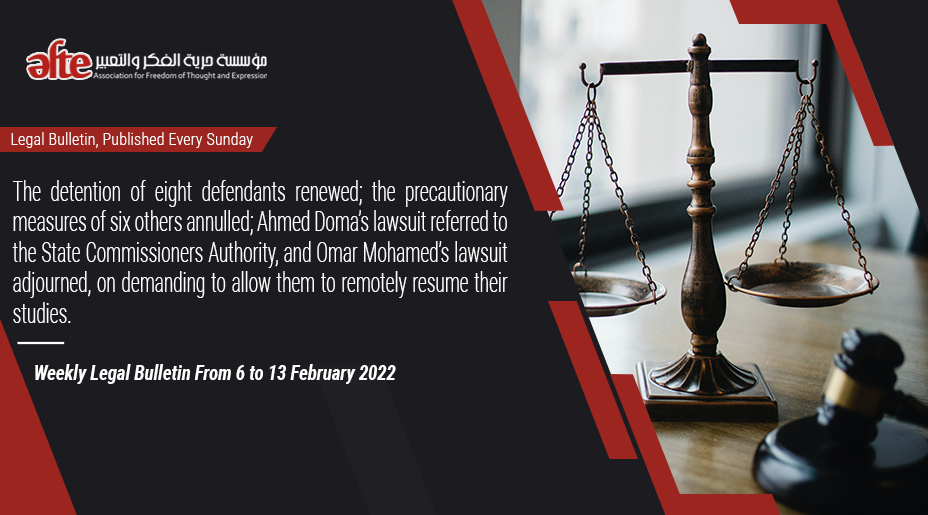 The detention of eight defendants renewed; the precautionary measures of six others annulled; Ahmed Doma’s lawsuit referred to the State Commissioners Authority, and Omar Mohamed’s lawsuit adjourned, on demanding to allow them to remotely resume their studies.

On February 6, The Criminal Court (The Second Circuit Terrorism) renewed Marwa Arafa’s detention for 45 days in connection with Case No. 570 of 2020 (Supreme State Security).

A six-men police force arrested Arafa from her house in Nasr City on 20 April 2020. They confiscated her mobile phone and sums of money in her possession at the time. After 14 days of enforced disappearance, Arafa appeared before the Supreme State Security Prosecution in connection with the case mentioned above. She faces several charges including joining a terrorist group with knowledge of its purposes and committing a financing crime for a terrorist purpose.

Security forces arrested Nohan on June 10, 2019, from Karmus Police Station while providing legal aid to a detainee. During the investigations, he was charged with joining a terrorist group and spreading false news.

In a similar context, The Criminal Court (The Council Chamber) renewed lawyer Mohamed Elsayed Abdel-Fatah’s detention for 45 days, in connection with Case No. 627 of 2021 (Supreme State Security Prosecution). Despite suffering from leukemia, his defense team presented evidence of this to the Public Prosecution and the Criminal Court.

A security force arrested Abdel-Fatah from his house in Alexandria at the beginning of last March. He was illegally detained until he was brought before the Supreme State Security Prosecution on March 14, in connection with the current case. The prosecution charged him with joining a terrorist group.

On February 6, The Administrative Judiciary Court (The Sixth Circuit) decided to refer the lawsuit filed by AFTE on behalf of Ahmed Doma to the State Commissioners Authority to prepare its legal opinion report after the appealed administrative body submitted a memorandum and to hear the lawsuit on the following March 16.

The Court also decided to adjourn AFTE’s lawsuit on behalf of Omar Mohamed Ali to the following March 6, for the appealed administrative body’s response.

Last October, AFTE filed the two lawsuits before the Administrative Judiciary Court, challenging the negative decision not to allow Doma and Ali to resume their studies online through the Prison Authority Sector’s digitally equipped halls, and against both the Minister of Higher Education and the Minister of Interior in their capacity.

Last December 15, The Criminal Court ordered to release the defendants with imposing precautionary measures as an alternative to pretrial detention, represented in handing the defendant himself over to the police station in his neighborhood for a certain number of hours weekly.

The Security forces arrested the defendants during the last week of June; the following month, they were presented before the Supreme State Security Prosecution to be investigated in connection with the current case and charged them with joining a terrorist group and spreading false news.