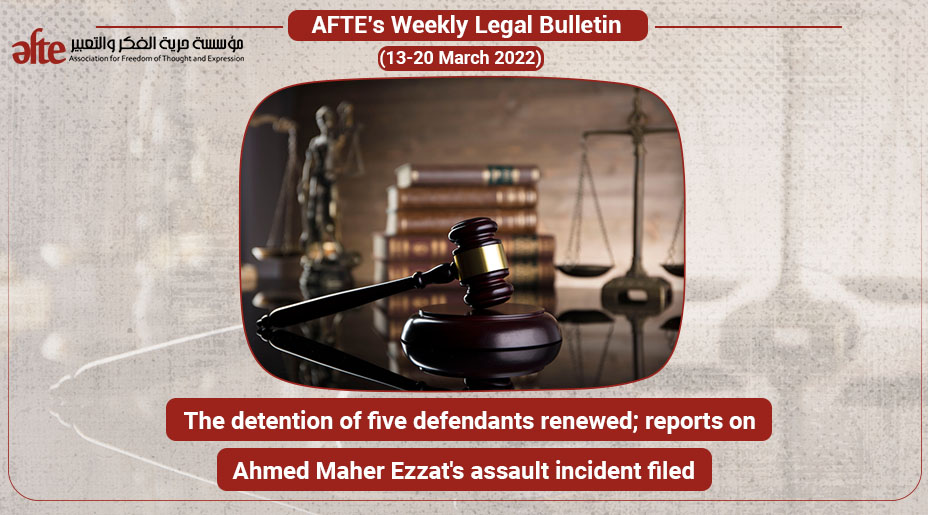 The Criminal Court (The Fifth Circuit) decided to release Dr. Hossam Eddin Shaaban in connection with Case No. 910 of 2021 (Supreme State Security).

Shaaban was arrested on 15 May 2021 at Al-Arish Hospital, as he was a member of a health ministry team dispatched to the Gaza Strip. He appeared before the Supreme State Security Prosecution on 1 June of the same year, where he faced charges of joining a terrorist group, spreading false news, and using social media to commit a crime.

The Criminal Court (The Fifth Circuit) renewed the detention of journalist Rabea al-Sheikh for 45 days, in connection with Case No. 1365 of 2018 (Supreme State Security).

Al-Sheikh was arrested on 1 August 2021 at Cairo Airport upon his return from Qatar. The Supreme State Security Prosecution charged him with joining a terrorist group, financing the activities of that group, and spreading false news.

The Criminal Court renewed the detention of lawyer Amr Nohan for 45 days in connection with Case No. 741 of 2019 (Supreme State Security Prosecution). Nohan has been held in pretrial detention for more than two years. He faces charges of joining a terrorist group and spreading false news.

The Criminal Court renewed the detention of lawyer Mohamed El-Sayed Abdel-Fatah for 45 days in connection with Case No. 627 of 2021 (Supreme State Security Prosecution). Abdel-Fatah suffers from leukemia. He was arrested from his house in Alexandria last March, and the prosecution charged him with joining a terrorist group.

On 16 March, the Criminal Court (The Third Circuit – Terrorism) renewed the detention of Ahmed El-Toukhy for 45 days in connection with his second case, No. 955 of 2020 (Supreme State Security Prosecution).

El-Toukhy headed to the National Security Premises on 26 September 2020, upon a summons he received over the phone. The case report noted that he was arrested in an ambush near his house. He appeared before Shebin El-Kom Prosecution on 12 January 2021 in connection with Case No. 532 of 2021. On 21 March of the same year, the Criminal Court decided to release him, but he was not released and rather recycled into the current case.

El-Toukhy faces charges of joining a terrorist group and using a Facebook account to spread false news that could disturb public security and order.

On 13 March, the Administrative Judiciary Court (The Sixth Circuit) decided to adjourn to 27 March the examination of lawsuit No. 5057 of 76 filed by AFTE on behalf of Ahmed Doma against both the ministers of interior and higher education in their capacity, challenging the negative decision not to allow him to resume his study online. The postponement came to allow the defense panel to review the State Commissioners Authority’s report.

In the lawsuit, ِAFTE demanded that Doma be allowed to resume his study by attending lectures online at the Prison Authority Sector’s digitally equipped halls which are also used for holding detention renewal sessions. Doma had earlier submitted several requests to allow him to attend lectures and exams online, but the prison administration rejected the request without giving reasons.

On 14 March, the State Commissioners Authority decided to withhold appeal No. 4329 of 68 filed by AFTE on behalf of Hagar Ismail Hanafy to report its legal opinion.

AFTE filed the appeal last July against Cairo University’s Faculty of Science, challenging the decision taken by the faculty’s dean to exclude Hanafy from being appointed as member of the university’s teaching staff for security reasons although she was one of the top students, which means that she fulfills all appointment requirements.

On 15 March, the South Zagazig Prosecution renewed the detention of Omar Mahmoud Al-Hout for 15 days in connection with Case No. 24978 of 2021 (Abo Hammad Misdemeanors). Al-Hout faces charges of joining a terrorist group and possessing publications that promote its ideas, the same charges he has faced in various cases since his arrest in 2014.

The two defendants were arrested in June 2021, and the Supreme State Security Prosecution charged them with joining a terrorist group and spreading false news.

On 19 March, the defense panel of Ahmed Maher Ezzat, aka Rigo, submitted reports to the Public Prosecutor, the head of the Community Protection Sector at the Ministry of Interior, the warden of Qanater Prison for men, and the head of the National Council for Human Rights regarding the physical assault to which Ezzat was exposed at the hands of inmates loyal to the prison administration, which knew about the incident but did not intervene. Ezzat has been held in pretrial detainee in connection with Case No. 855 of 2020 (Supreme State Security).

The assault came against the backdrop of Ezzat’s decision to go on a hunger strike and his refusal to receive prison food, in protest against his continued pretrial detention since 2020. The Tora prison administration decided to transfer him to the Qanater Prison as a punishment for going on a hunger strike. This caused difficulties for Ezzat’s family to visit him. The Qanater prison administration also decided to hold him in a cell with inmates with takfiri ideas, which poses a grave danger to his life.