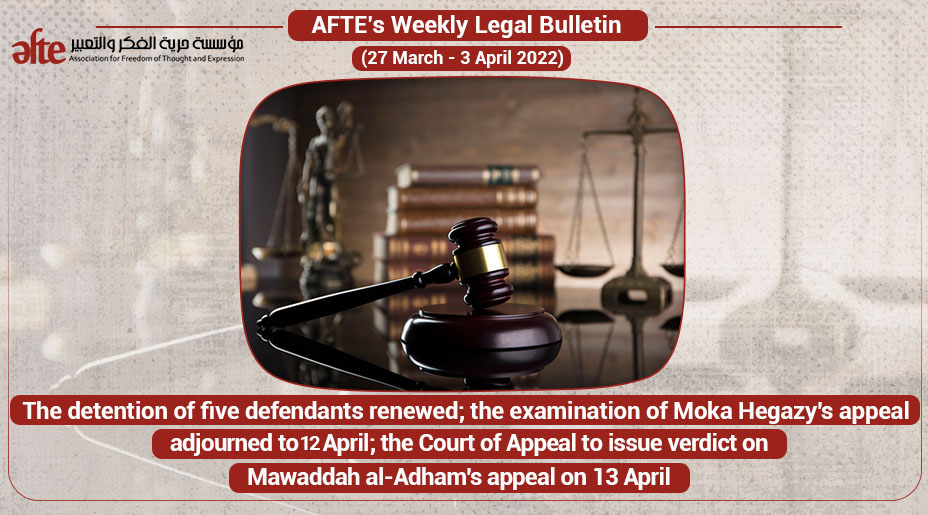 The detention of five defendants renewed; the examination of Moka Hegazy’s appeal adjourned to 12 April; the Court of Appeal to issue verdict on Mawaddah al-Adham’s appeal on 13 April

The Criminal Court renewed the detention of lawyer Mohamed Ramdan for 45 days in connection with Case No. 910 of 2021 (Supreme State Security), the third case that Ramadan has been listed in since his arrest on 10 December 2018.

Ramadan was arrested after he posted a photo of on Facebook featuring himself wearing a yellow vest in solidarity with the yellow vests protests in France back then. He has been recycled into three cases on charges of joining a terrorist group.

The Criminal Court also renewed the detention of Ahmed Hassanein Mohamed Moussa for 45 days in connection with Case No. 1475 of 2019 (Supreme State Security). He faces charges of joining a terrorist group, committing a financing crime, spreading false news, and misusing social media.

The Criminal Court (The Third Circuit Terrorism) renewed the detention of Dr. Ahmed Al-Tohamy, assistant professor of political science at the Faculty of Economic Studies and Political Science at Alexandria University, for 45 days, in connection with Case No. 649 of 2020 (Supreme State Security).

Al-Tohamy was arrested on 3 June 2020, and after being illegally detained for 17 days, he appeared before the Supreme State Security Prosecution in connection with the current case, in which he is charged with joining a terrorist group, spreading false news, and misusing social media.

The Criminal Court decided to renew the detention of assistant professor at the National Research Center Hamed Sedeek for 45 days, pending investigations into Case No. 1356 of 2019 (Supreme State Security).

Sedeek is facing charges of joining a terrorist group, spreading false news, and misusing social media. Case No. 1356 of 2019, in which Sedeek is involved, also included activist Alaa Abdel Fattah, human rights lawyer Mohamed al-Baqer and activist Mohamed Oxygen before they were recycled into another case and referred to exceptional trials.

The Criminal Court also decided to renew the detention of Belal Abdel Razek for 45 days in connection with Case No. 488 of 2019 (Supreme State Security Prosecution).

A plainclothes police force arrested Abdel Razek in 2019 for his participation in a protest in Alexandria. He faces charges of joining a terrorist group and promoting its goals, spreading false news, and misusing social media to achieve that goal.

On 31 March, the Cairo Criminal Court (Circuit 27 South) sentenced Ayman Mansour Nada, the head of the radio and television department at Cairo University’s Faculty of Mass Communication, to suspended one year in prison and ordered him to a fine of 100,000 pounds, in connection with Case No. 9840 of 2021 (Fifth Settlement Misdemeanor).

Nada was charged with insulting the Supreme Council for Media Regulation (SCMR) member Rania Hashem and using a Facebook account to commit this crime. The court acquitted him of all other charges that included spreading false news about Egyptian media and insulting the SCMR and some of its members. The court further rejected the civil lawsuit filed by the SCMR head, Karam Gabr, against Nada.

On 26 March, the Administrative Judiciary Court (The Sixth Circuit) decided to adjourn to 17 April the examination of lawsuit No. 5057 of 76 filed by AFTE on behalf of Ahmed Doma, challenging the negative decision not to allow him to resume his study online, due to the defense’s request to correct the form of the lawsuit by adding the Institute of Arab Research and Studies as a new appellee.

Last October, AFTE filed the lawsuit against both the Minister of Higher Education and the Minister of Interior in their capacity and recently against the Institute of Arab Research and Studies. Doma, who has been serving a 15-year jail term since 2015, sent a written request through his lawyers to attend the online lectures of the Political Science Diploma at the Institute of Arab Research and Studies, as the Institute required a certain rate of attendance of lectures and exams and obtaining a written approval from the prison administration. However, the prison administration rejected Doma’s request without giving reasons.

On 29 March, the Juvenile Misdemeanor Court of Appeal decided to adjourn to 12 April the examination of the appeal filed against the three-year prison sentence issued against content creator Nancy Ayman Sobhy, known as Moka Hegazy.

On 24 February, the Juvenile Misdemeanor Court in Giza sentenced Hegazy, 16, to one year in prison on charges of practicing prostitution with men without discrimination in return for money and two years in prison for offering herself in a public manner that contained temptation to practice debauchery, in connection with Case No. 5459 of 2020 (Juvenile Appeal), registered under No. 188 of 2022 (Juvenile Misdemeanor).

Hegazy was arrested in Hosary Square in the Sixth of October City on 8 July 2021.

On 29 March, the Disciplinary Board of the Teaching Staff at the Higher Technological Institute in the 10th of Ramadan City decided to adjourn the examination of disciplinary case No. 18 of 2021 filed against Dr. Manar Al-Tantawy to 5 April.

Al-Tantawy was referred to a disciplinary hearing on 15 December on charges of insulting the Higher Technological Institute in the 10th of Ramadan City and its dean via social media and some anti-government satellite channels. This came against the backdrop of her objection to the dean’s decision to reject her return to her old post as head of the mechanical engineering department that she had previously assumed and abdicated temporarily.

On 29 March, the Court of Appeal (Circuit 15) set 13 April as a date to adjudicate on appeal No. 11144 of 12 filed on behalf of Mawaddah al-Adham against the verdict issued by the Cairo Economic Court to fine her 300,000 Egyptian pounds.

In January 2021, the Cairo Economic Court decided to fine Al-Adham 300,000 Egyptian pounds on charges of infringing on family values and inciting immorality and debauchery in Case No. 246 of 2020 (Economic Misdemeanor), registered under No. 479 of 2020 (Appeal Misdemeanor).

On 31 March, AFTE submitted a report to the Public Prosecutor that carried No. 155833 regarding the hunger strike that Ahmed Doma went on days before.

Doma went on a hunger strike in protest against the maltreatment he experienced inside Tora Prison, which included preventing him from outdoor exercise and depriving him of necessary healthcare after suffering several relapses. The prison administration also prevented him from receiving any books or magazines or using the prison’s library. After he declared a hunger strike, the prison administration moved him to a solitary cell as a form of punishment.

In its report, AFTE called on Public Prosecutor Hamada El-Sawy to launch an urgent investigation into what Doma is being subjected to in prison, document his hunger strike, and transfer him to the hospital immediately to follow up on his health condition.