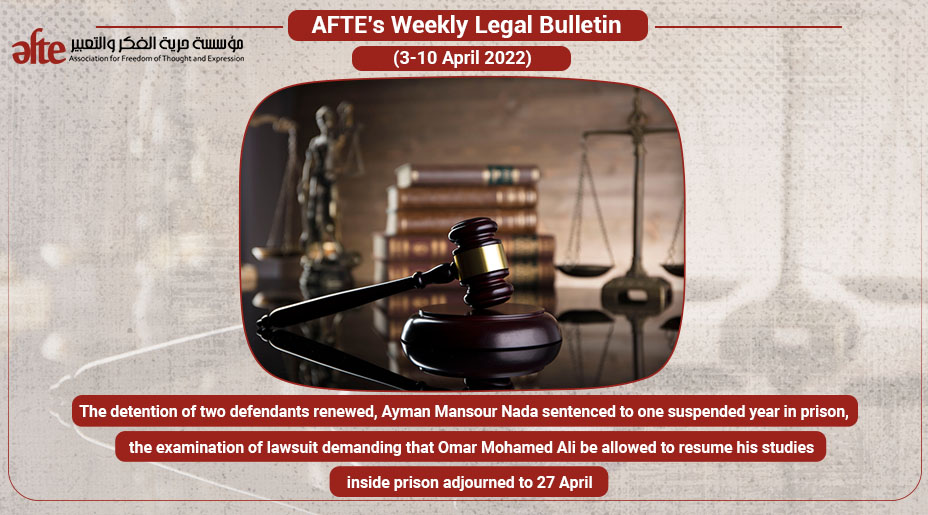 The detention of two defendants renewed, Ayman Mansour Nada sentenced to one suspended year in prison, the examination of lawsuit demanding that Omar Mohamed Ali be allowed to resume his studies inside prison adjourned to 27 April

The Criminal Court (The Third Circuit Terrorism) renewed the detention of journalist and writer Ahmed Mohamed Abu Khalil for 45 days in connection with Case No. 558 of 2020 (Supreme State Security), in which he faces charges of joining a terrorist group, misusing social media, and spreading false news.

Security forces arrested Abu Khalil from his house on 3 June 2020. After ten days of illegal detention, he appeared before the State Security Prosecution in connection with the above-mentioned case, and he is still held in pretrial detention till now.

The Criminal Court (The Third Circuit Terrorism) also renewed the detention of member of the 6 April Movement Sherif El-Rouby for 45 days in connection with Case No. 1111 of 2020 (Supreme State Security).

On 22 July 2019, and after one year and a half of pretrial detention, the Cairo Criminal Court decided to release El-Rouby in connection with the first case No. 621 of 2018. However, security forces arrested him again in December 2020, in connection with the current case, in which he faces the same charges he faced in the previous case, namely joining a terrorist group and spreading false news.

On 31 March, the Cairo Criminal Court (Circuit 27 South) sentenced Ayman Mansour Nada, the head of the radio and television department at Cairo University’s Faculty of Mass Communication, to one suspended year in prison and ordered him to pay a fine of 100,000 pounds, in connection with Case No. 9840 of 2021 (Fifth Settlement Misdemeanor).

Nada faces several charges, including publishing false news about the Egyptian media and insulting the Supreme Council for Media Regulation (SCMR) and some of its members. However, the court’s decision came against the backdrop of Nada’s insulting SCMR member Rania Hashem and using a Facebook account to commit crimes. The court further rejected the civil lawsuit filed by the SCMR head, Karam Gabr, against Nada.

On 3 April, the Administrative Judiciary Court (The Sixth Circuit) adjourned to 27 April the examination of lawsuit No. 5050 of 76 filed by AFTE on behalf of Omar Mohamed Ali, challenging the negative decision not to allow him to resume his study online, for the defense to respond and submit documents.

The appellant had received a life sentence in connection with Case. No. 174 of 2015 (West Cairo Military Felonies). He submitted a request to the Ministry of Higher Education and the Thebes Higher Academy to resume his architecture studies online inside his prison cell, but the prison administration rejected the request without giving reasons.

On 5 April, the Disciplinary Board of the Teaching Staff at the Higher Technological Institute in the 10th of Ramadan City decided to adjourn the examination of disciplinary case No. 18 of 2021 filed against Dr. Manar Al-Tantawy to 10 May.

The adjournment came after Al-Tantawy’s defense requested to review the CD that contains the pieces of evidence of the charges levelled against her. These charges include insulting the Higher Technological Institute and its dean via social media and some anti-government satellite channels, as stated in the lawsuit.

Al-Tantawy requested to get her legal right to chair the Mechanical Engineering Department at the institute, a post that she had previously assumed but abdicated temporarily for health reasons. Nevertheless, the institute’s dean rejected her request on the ground that she is the wife of former prisoner of conscience and journalist Hisham Gaafar.