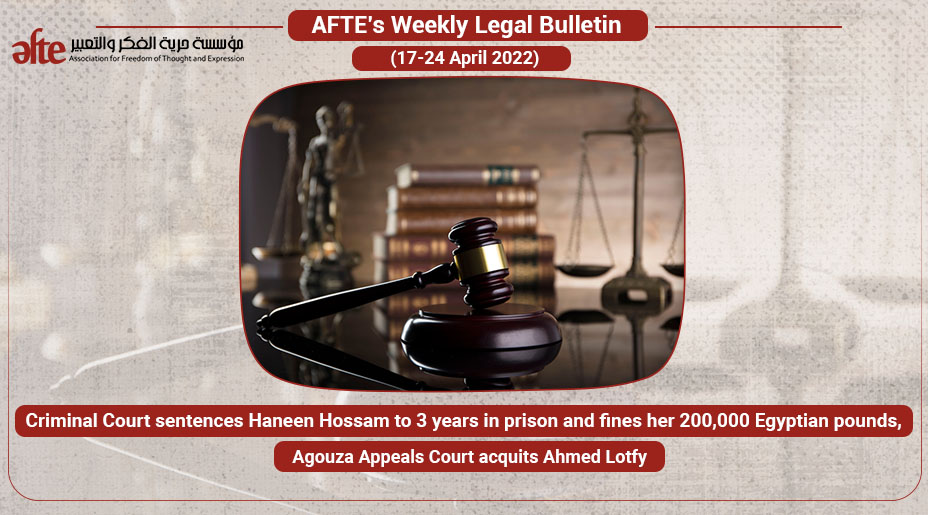 On 18 April, the Cairo Criminal Court sentenced Haneen Hossam to three years in prison and fined her 200,000 Egyptian pounds in connection with Case No. 4917 of 2020 (Sahel Felonies), registered under No. 2106 of 2020 (North Cairo), known in local media as the human trafficking case. The court also ordered Hossam to pay the criminal costs.

On 21 June 2021, the Criminal Court sentenced Hossam to 10 years in prison in absentia and fined her 200,000 Egyptian pounds on charges of human trafficking and commercial exploitation of children. The court agreed to retry Hossam, as the previous verdict was issued in absentia, as per Article 395 of the Code of Criminal Procedures that allows those convicted in absentia to request a retrial before the penalty is extinguished by the lapse of time.

On 17 April, the Administrative Judiciary Court (The Sixth Circuit) adjourned to 8 May a hearing to look into Case No. 5057 of 76 filed last October by AFTE on behalf of Ahmed Doma against the Minister of Higher Education and the Minister of Interior in their capacity, and the Institute of Arab Research and Studies, challenging the negative decision not to allow him to resume his study online.

The appeal was filed after Doma, who has been serving a 15-year jail term since 2015, submitted a written request through his lawyers to attend the online lectures of the Political Science Diploma at the Institute of Arab Research and Studies, as the Institute required the attendance of a certain number of lectures and exams and obtaining a written approval from the prison administration. However, the prison administration rejected Doma’s request without giving reasons.

On 20 April, the Agouza Misdemeanors Court of Appeal acquitted Ahmed Lotfy Ali Mohamed, after he appealed against the verdict issued against him in absentia that sentenced him to five years in prison and fined him 100,000 pounds, in connection with Case No. 11095 of 2016, known in local media as “the land”, in which Lotfy was charged with demonstrating.