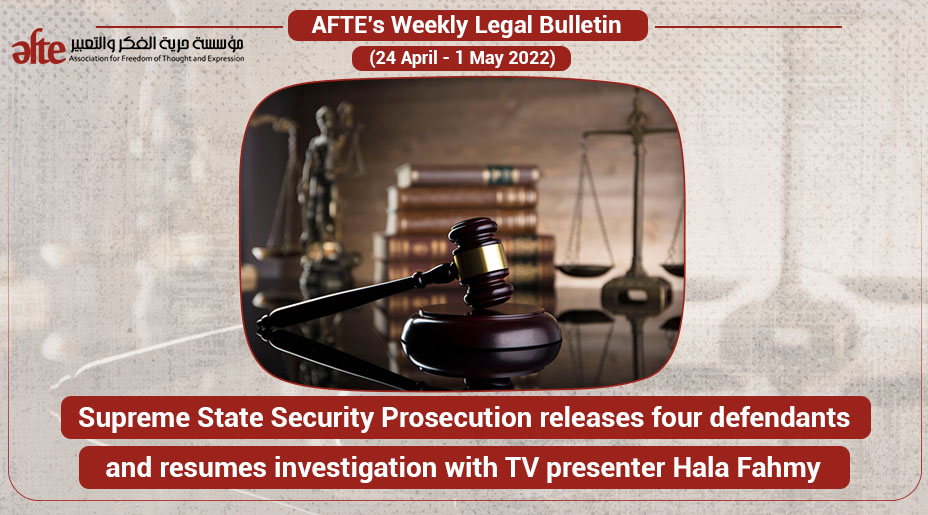 Shawky was arrested from his clinic in El-Sayeda Zeinab neighborhood on 14 October 2018, and he faced charges of joining a terrorist group and spreading false news.

On 3 June 2020, security forces arrested Abu Khalil from his house. Ten days later, he appeared before the Supreme State Security Prosecution in connection with the same case. He was charged with joining a terrorist group, misusing social media, and spreading false news.

On 24 April, the Association for Freedom of Thought and Expression (AFTE) and The Egyptian Initiative for Personal Rights (EIPR), on behalf of Omar Mohamed Hadhoud, the brother of deceased economic researcher Ayman Hadhoud, submitted a request to the head of Nasr City’s Prosecution to file a civil lawsuit, No. 738 of 2022 (Nasr City administrative) against the administration of Abbasiya mental health hospital, and anyone proved guilty in Hadhoud’s death.

During the investigation, Omar Hadhoud raised his suspicion of a criminal act that led to his brother’s death due to physical assault that caused his death. He demanded an investigation into that.

The prosecution allowed Omar Hadhoud’s lawyer, Fatma Serag, to see the forensic report, which contained the details of the autopsy and its results, Hadhoud’s blood sample reports, and the echocardiograms report of the deceased economic researcher.

The prosecution investigated Fahmy for the first time on 24 April, without her lawyers attending, and decided to remand her in custody for 15 days pending investigation. Fahmy faced charges of joining a terrorist group, incitement to commit a terrorist crime, and spreading false news inside and outside Egypt.

On 26 April, the Juvenile Misdemeanour Court of Appeal set 31 May as a date to look into the appeal filed by content creator Nancy Ayman Sobhy, known as “Moka Hegazy”, against the three-year prison sentence issued against her in connection with Case No. 5459 of 2020 (Juvenile Appeal), registered under No. 188 of 2022 (Juvenile Misdemeanour).

Hegazy faces charges of practicing prostitution with men without discrimination in return for money and offering herself in a public manner that contained temptation to practice debauchery. On 24 February, the Juvenile Misdemeanour Court sentenced Hegazy to one year in prison over the first charge and two years in prison over the second.

On 26 April, the Criminal Court (The Third Circuit Criminal Terrorism) renewed the detention of journalist Rabea Elsheikh for 45 days in connection with Case No. 1365 of 2018 (Supreme State Security).

Elsheikh worked as a journalist for the Qatari Al-Jazeera TV channel before his arrest at Cairo Airport while returning from Qatar. He faces charges of joining a terrorist group, financing the activities of that group, and spreading false news.

On 28 April, the Cairo Criminal Court (Circuit 27 South Cairo) decided to refer Case No. 16036 of 2021 (1st settlement Misdemeanor), registered under No. 18 of 2021 (Cairo Appeal), filed against Ayman Mansour Nada, the head of the radio and television department at Cairo University’s Faculty of Mass Communication, to the Court of Appeal to be examined before another circuit.

The Criminal Court’s decision comes after it previously sentenced Nada to one suspended year in prison in connection with Case No. 9840 of 2021 (Fifth Settlement Misdemeanour) in which he faced similar charges. So, the court considered the sentence a disclosure of its opinion in the lawsuit.

The prosecution charged Nada with insulting the Egyptian media, insulting head of the Supreme Council for Media Regulation Karam Gaber, and using his Facebook account to commit these crimes.