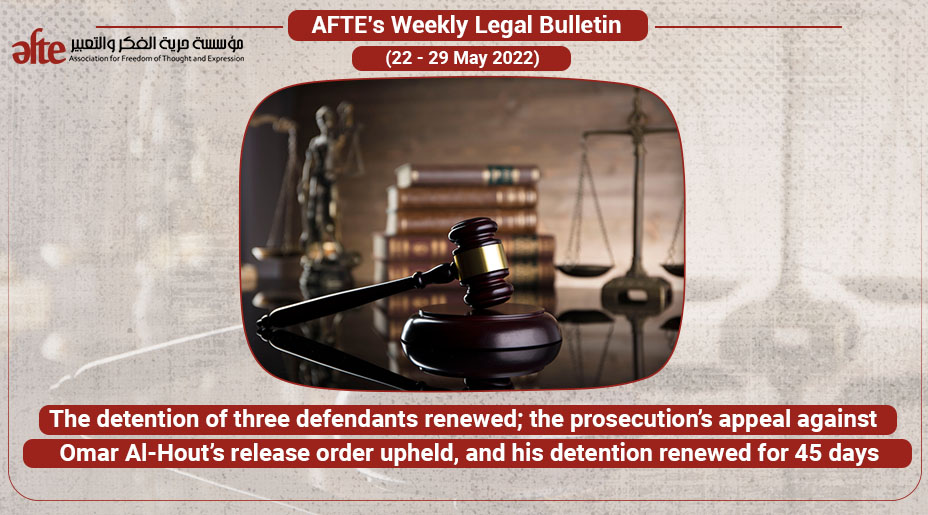 The detention of three defendants renewed; the prosecution’s appeal against Omar Al-Hout’s release order upheld, and his detention renewed for 45 days

Mohamed was arrested from his house in Qena governorate, and was brought before the Supreme State Security Prosecution for the first time on 22 February. He’s serving his term in the Qanater men’s prison, in connection with the current case.

The Supreme State Security Prosecution renewed the detention of TV presenter Hala Fahmy for 15 days, in connection with Case No. 441 of 2022 (Supreme State Security). It also resumed investigations with Fahmy in a separate session regarding a video she shared on Facebook, which the prosecution considered as one of the accusatory pieces of evidence against her.

The former TV presenter at the National Media Authority faces charges of joining a terrorist group, incitement to commit a terrorist crime, and spreading false news domestically and abroad.

Salama was involved in this case after he posted a video on TikTok parodying a sarcastic song about price hikes-similar to the case known in local media as “the humorous poor”. The prosecution investigated him regarding the reasons for posting the video. He confirmed that he posted it just for entertainment.

The prosecution charged Salama with joining a terrorist group and spreading false news.

On 26 May, the Zagazig Criminal Court upheld the prosecution’s appeal against Omar Al-Hout’s release order and renewed his detention for 45 days pending further investigations into Case No. 24978 of 2021 (Abo Hamad Misdemeanors).

The Criminal Court issued a decision on 25 May to release Al-Hout under the guarantee of his residence. However, the prosecution appealed the decision. Al-Hout was arrested in 2014 for participating in a demonstration at Zagazig University while studying at the Faculty of Pharmacy back then. Since then, he has been involved in seven different cases on the same charges that included joining a terrorist group and possessing publications promoting its ideas.