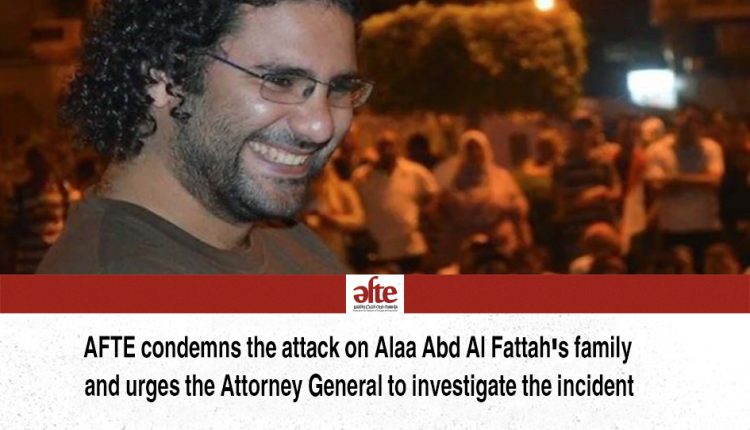 The Association for Freedom of Thought and Expression (AFTE) condemns in the strongest terms the attack that took place this morning on members of the family of detained activist and blogger Alaa Abdel Fattah in front of Tora prison in full view of the security forces. The security forces did not provide any protection to the three family members; rather, the victims’ testimonies revealed that the attack was carried out with the blessing of the security forces.

A group of women had physically assaulted and beaten, Dr. Laila Soueif, the mother of the detained activist, and her daughters Mona and Sanaa, and robbed their personal belongings, during their sit-in in front of the gate of Tora prison demanding to receive any correspondence from Abdel Fattah.

Members of Abdel Fattah’s family staged a sit-in outside the prison gate for the last two nights, demanding to receive a letter from him, reassuring them of his health condition after the suspension of prison visits for more than three months, and the news of Corona infections among the prison inmates.  However, the prison administration refused to respond to this request.

AFTE supports the request of the family of Alaa Abdel Fattah to communicate with him, whether through a letter or a phone call as stipulated in the Prison Organization Law. AFTE also calls on the Attorney General to open an immediate investigation into the incident.

AFTE recently launched a campaign calling for the release of prisoners of violations of freedom of expression in light of the outbreak of Covid-19 pandemic. In the context of the campaign, AFTE sent a letter to the National Council for Human Rights asking it to shoulder its responsibilities, and to call on the Prison Authority to provide regular means of communication between prisoners or detainees, their families and their lawyers.

Renewing the detention of Shady Abu Zaid for 45 days

Human Rights Organizations Condemn The General Prosecutor’s Inaction After Abducting Sana Seif in Front of His Office and Demand Her Immediate Release.