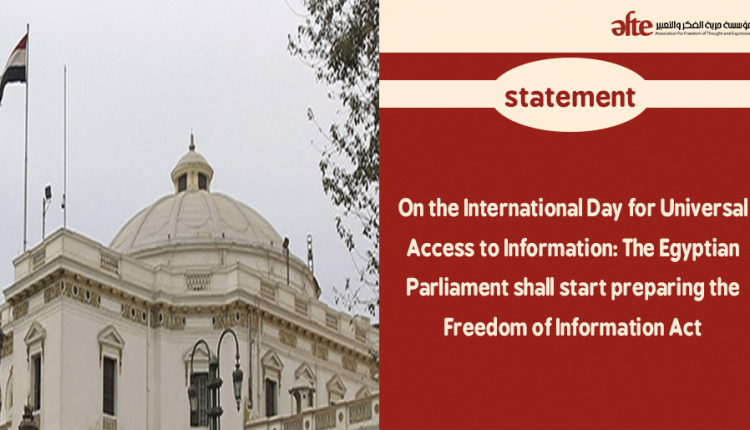 On the International Day for Universal Access to Information: The Egyptian Parliament shall start preparing the Freedom of Information Act

The celebration of the International Day for the right to the know began in 2003, on the occasion of the founding of the Global Network of Freedom of Information Act (FOIA) in Bulgaria in 2002, which brought dozens of representatives of NGOs working in the field of defending the freedom of information at the national and international levels.

AFTE stresses the importance of having a political will to consolidate the right to the know along with a mechanism that ensures a societal dialogue on the draft of the Freedom of Information Law in a way that guarantees the representation of all groups, specifically those whose work in related to the right to the know, such as journalists, academics and economic researchers and workers in civil society organization, to ensure the effectiveness of the law and meet the needs of society.

We believe that society needs to pass a law that guarantees the access and circulation of accurate and documented information has never been stronger, especially in light of the COVID-19 epidemic, which has proven that the best way out of the crisis is linked to the freedom of information circulation and ensuring its access to all segments of society and in appropriate formats for all, to the impact of information disclosure on the priorities of individual and community choices and the importance of allocating available medical resources. At the beginning of the epidemic crisis, the World Health Organization emphasized the extent to which the right to health is linked to information and its circulation.

Since 2011, the legislative environment in Egypt has lacked a law regulating the freedom of information, including freedom of access, receipt, and circulation of information, as stipulated in the Constitution in its article (68) and article (19) in the International Law. Since then, several attempts have been made to prepare a draft law for the Freedom of Information Law, the most recent of which was the draft that the Supreme Media Council completed in 2017 and sent to the Parliament and the Prime Minister. However, this draft remained in the drawers of the Egyptian government.

The right to the know and the freedom of information are fundamental rights, which guarantee a package of other human rights and freedoms. As well, it plays a central role in terms of government transparency and accountability, as it is difficult for citizens to influence political, social, and cultural life, the decision-making process, and the follow-up of government commitments to the state’s general budget allocations, without the availability of an appropriate amount of information that ensures transparency and accountability.