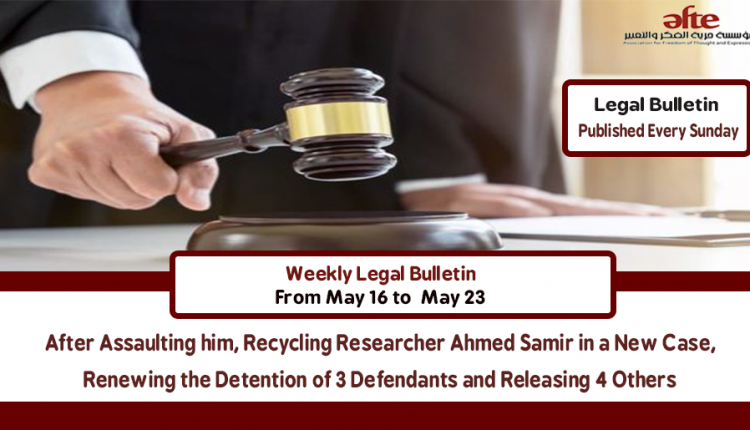 After Assaulting him, Recycling Researcher Ahmed Samir in a New Case, Renewing the Detention of 3 Defendants and Releasing 4 Others

May 17, 2021: The third circuit (terrorism), renewed the pretrial detention of defendant Ahmed Maher Ezzat, known as “Rego”, director of “Bohemian” studio, for 45 days, pending case No. 855 of 2020 supreme state security, after his arrest from his workplace on  May 4, 2020, and he was first investigated in case No. 586 of 2020 supreme state security, and was detained for almost 5 months, until a decision to replace his pretrial detention with precautionary measures was issued but it wasn’t implemented, instead he was investigated in a new case, this practice is known as “Recycling” which means adding political detainees or prisoner of conscience to new cases with similar charges after the legal limit for their pretrial detention has expired.

It should be noted that Maher worked as a PR officer for Lieutenant General Samy Anan’s presidential campaign in 2018, and for the “Strong Egypt” political party headed by former presidential candidate, Dr. Abdel Moneim Aboul Fotouh.

May 18, 2021: After not allowing him to attend the last two sessions, The third circuit (terrorism) postponed the session on the renewal of the detention of activist Mohamed Salah Abdel Aziz, Ahmed Fathy Massoud, and Ahmed Yousry Ghaly, which was supposed to be held on Thursday, May 16, 2021, to Sunday, June 13, 2021, due to the national holiday of Eid al-Fitr.

Security forces arrested Salah in November 2019, he was detained pending case No. 488 of 2019 supreme state security, on July 19, 2020, the first circuit terrorism decided to replace his pretrial detention with precautionary measures, and the prosecution didn’t appeal the decision, and he was recycled in a new case No. 855 of 2020 supreme state security.

It should be noted that Salah was accompanied by activist Esraa Abdel Fattah during the incident of her arrest in October 2019, and he kept blogging about the incident and demanding her release, until he was arrested a few weeks later along with journalist Solafa Magdy and her husband photographer Hossam El-Sayad, who were released on April 14, of this year, Salah faced the same charges within the same case as Esraa.

In the same context, The council chamber of the criminal court renewed the detention of 2 defendants, renewed precautionary measures of 3 others: Waleed Abd El-Hakim, Moataz Medhat, and Samir Khaled, and released Adham Mohamed Hosny, and Ayman Abdel-Hameed Nasr with precautionary measures, in case No.751 of 2020 supreme state security, they were charged with joining “Ultras White Knights” fan club of Zamalek SC.

May 18, 2021: Qasr al-Nil Prosecution released Omar Ahmed Mohamed Mahmoud Morsy, on a bail of 1000 Egyptian pounds, after making sure that the defendant did not belong to any terrorist organizations or groups, he was arrested while standing in Tahrir square, holding the Palestinian scarf, and chanting slogans in support of the Palestinian cause, and was charged with inciting rallies that could disturb public order.

It is noteworthy that the Qasr al-Nil police station denied the existence of the defendant before, and the accused suffers from serious health problems since the January 25, 2011 revolution and hasn’t recovered yet.

May 22, 2021: After the incident of assaulting him by the deputy warden of Tora Liman Prison, Recycling researcher Ahmed Samir Santawy in a new case No. 877 of 2021 supreme state security, and yesterday the Supreme State Security Prosecution began to investigate him within it, during the investigations, the prosecution faced him with technical reports that mention a social media “Facebook” account attributed to his ownership, and Santawy denied his ownership of that account.

While his defense requested a forensic medical examination to prove and investigate the incident of assaulting him yesterday by the deputy warden of Tora Liman Prison, and last week they submitted a request, to the supreme state security prosecution demanding his release, so that he could continue his studies at the Central European University (CEU) in Austria; however, they have not received a response to this request until today.

It should be noted that he’s still detained under case No. 65 of 2021, Supreme State Security, in which he is facing accusations of joining a terrorist group with knowledge of its purposes, promoting false news that breaches security and public order, and misusing social media “Facebook” for that purpose.

May 23, 2021: The Administrative Court (First circuit) scheduled the upcoming June 12 session, as the first session of emergency motion in lawsuit No. 44623 of 75 judicial year, filed by AFTE on behalf of “Walid Mohamed Hamid Aqlan”, against Minister of Interior (in his capacity), Head of Giza security directorate (in his capacity), and Chief of Bulaq Dakrour police station (in his capacity).

Cairo Criminal Court had previously issued a default judgment against “Walid Mohamed Hamid Aqlan”, with five years imprisonment with labour, in Case No. 5976 of 2013, the New Felonies of Heliopolis, known as “El-Ethadia events”, in which he’s accused of participating in a gathering, displaying force, destroying public properties, and assaulting a public official during and because of the performance of their work, before the sentence was reduced to three years.