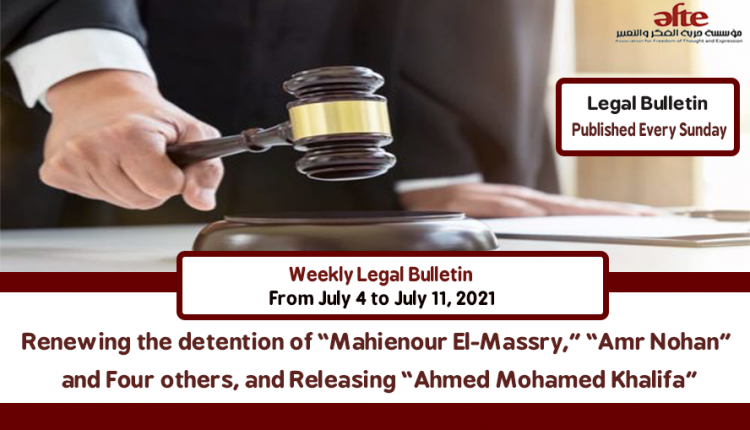 Renewing the detention of “Mahienour El-Massry,” “Amr Nohan” and Four others, and Releasing “Ahmed Mohamed Khalifa”

It’s worth noting that both “Mohamed Kobeisy” and “Mostafa Gamal” were recycled in the current case, as first the Council Chamber of The Criminal Court issued an order to release “Mohamed Kobeisy” after 5 months of pretrial detention pending Case No. 751 of 2020, and he was transferred to El-Maragha Police Station in preparation of his release, and there he was transferred again to Sohag Security Directorate to be detained for several days until he was summoned before the prosecution pending the current case. Furthermore, Case No. 65 of 2021 is the third case for “Mostafa Gamal,” who spent two years and two months in pretrial detention pending the first Case No. 480 of 2018, till the supreme state security prosecution issued its order to release him, though he was detained in unknown place to be recycled pending the second Case No. 730 of 2020, and once again an order to release him with a precautionary measure was issued. Nevertheless, he was detained again in an unknown place to be recycled pending the current case.

AFTE documented the violations committed against the defendants in the case in its report “Open Jails”.. How are cases being adapted against those accused of free speech? (Case No. 65 of 2021 as a model)

On Tuesday’s session, June 6, The Council Chamber of The Criminal Court had renewed the pretrial detention of lawyer “Amr Nohan” for 45 days pending Case No. 741 of 2019, Supreme State Security, the security forces arrested him on June 10, 2019, while providing legal aid to a political defendant in Karmus Police Station, and although he exceeded two years in pretrial detention which is the maximum period according to the law, he hasn’t been released till now.

And it also renewed the detention of lawyer, human rights defender, and 2014 winner of Ludovic Trarieux “Mahienour Mohamed Abdel-Salam El-Massry” for 45 days pending investigations into case No. 488 of 2019. She was arrested on September 22, 2019, based on a warrant to bring and seize her, by kidnapping her in a microbus from the State Security Prosecution headquarters, while providing legal aid as a human rights lawyer to activists that were accused of demonstrating in September 20 events, and also she was recycled in a new Case No. 855 of 2020 during her imprisonment with the same previous charges, and in less than 2 months, “Mahienour” shall complete her second year in pretrial detention.

The detention of “Islam Ali Muhammed” was also renewed for 45 days pending Case No. 1898 of 2019, Supreme State Security, in which he’s charged with promoting a terrorist group, spreading false news, and misusing social media.

After exceeding 6 months in pretrial detention on the grounds of his journalistic activity, The Supreme State Security Prosecution has issued its order to release 360 Masr Website journalist “Ahmed Mohamed Khalifa” pending Case No. 65 of 2021, and he was transferred to Fayoum Police Station in preparation of his release.

“Khalifa” was arrested on January 6, 2021, based on the prosecution’s warrant to bring and seize him, he was investigated by the prosecution after 13 days on his journalistic activity and exhibits of his writings on 360 Masr Website, in which he published topics on rights and freedoms.

Proactive Repression.. The second quarterly report on the state of freedom of…