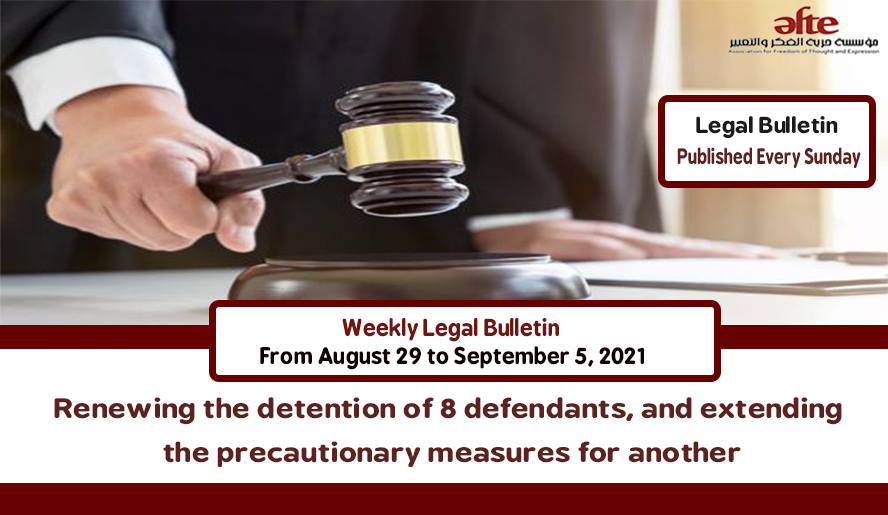 Renewing the detention of 8 defendants, and extending the precautionary measures for another

The Council Chamber of the Criminal Court renewed the detention of lawyer Amr Nohan for 45 days pending Case No. 741 of 2019, Supreme State Security. Despite the fact that Nohan completed two years in pretrial detention, this requires his release for exceeding the maximum period of pretrial detention in the same case according to the Code of Criminal Procedure.

Also, The Third Circuit Criminal Terrorism renewed the detention of blogger Ayman Abdel Moaty, pending Case No. 880 of 2020. Notably, Abdel Moaty was previously listed in Case No. 621 of 2018, he was released, but he was arrested again on the grounds of the September 20 demonstrations last year against President El-Sisi.

The same Circuit further considered the renewal of the detention of dentist Waleed Shawky, who has been detained since 2018; First, pending Case No. 621 of 2018, a decision was issued to replace his pretrial detention with precautionary measures on September 24, 2020, but the decision was not executed. Second, on October 6, 2020, he was rotated into a new case, No. 880 of 2020, he was arrested from his clinic in El-Sayeda Zeinab by security forces, both in civilian clothing and official uniforms.

And in Zagazig, The Criminal Court renewed the detention of the Quranist blogger Reda Abdel-Rahman for 45 days, pending Case No. 3418 of 2020. He was arrested last August on the 22nd from his house after an arrest warrant was issued against him, based on the National Security’s investigations. His phone was confiscated, then he disappeared for more than a month. Abdel-Rahman proved in the investigation report that he was detained throughout his disappearance at Kafr Saqr police station before he was brought before the prosecution in October of the same year.

Pending Case No. 65 of 2021, The Council Chamber of the Criminal Court renewed the detention of Nour Al-Din Shaker for 45 days. Shaker was listed in this case on the grounds of joining “Ultras White Knights.” He was arrested from his house in Assuit and was first listed in Case No. 751 of 2020, and in February 2021, he was rotated in the current case.

Furthermore, the Third Circuit Terrorism ordered the extension of the precautionary measures imposed on Mostafa Gamal, who has been recently released on August 1 after six months of pretrial detention, preceded by a three-year prison sentence into Case No. 708 of 2018.

It also ordered to renew the detention of Mostafa Gamal, the current case is considered his third one, as first he was listed in Case No. 480 of 2018 and after two years and two months in pretrial detention, he was released under the guarantee of his place of residence, but he was rotated into Case No. 730 of 2020. On January 19, 2021, he was rotated again into the current Case.

In the same context, the Council Chamber of the Criminal Court renewed the detention of Mohamed Safani Kobeisy, Hussein Ali Hussein, and Naglaa Fathy Fouad. The investigations charged them with joining a terrorist group, spreading false news, and misusing a social media website for the aim of spreading false news.