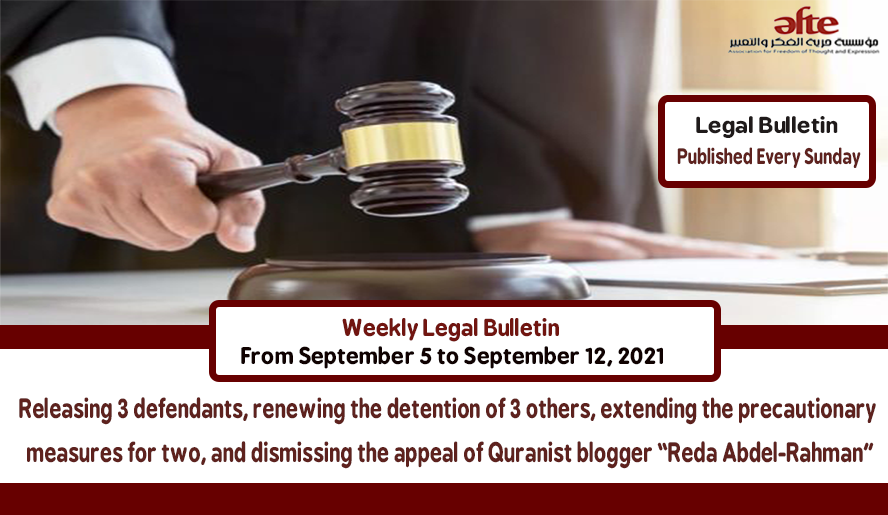 Releasing 3 defendants, renewing the detention of 3 others, extending the precautionary measures for two, and dismissing the appeal of Quranist blogger “Reda Abdel-Rahman”

Zagazig Criminal Court dismissed the appeal filed by the attorney of the Quranist blogger “Reda Abdel-Rahman.” The court upheld the previous decision of extending his detention for 45 days.

The decision came pending investigations into Case No. 3418 of 2020, State Security Emergency Misdemeanour.

It should be noted the Abdel-Rahman has been in pretrial detention for more than a year for belonging to the Quranic doctrine and expressing it on his blog, which led to his exposure to many violations, as his religious beliefs do not fit with the formal conception of Islam adopted by the institutions of the state.

In the developments of Case No. 1956 of 2019, the Council Chamber of the Criminal Court issued a decision to release both “Akram Mostafa Farouk” and “Mohammad Ahmed Mansour” with precautionary measures.

The Third Circuit Terrorism decided to renew the detention of the member of the Executive Bureau of 6th of April movement “Sherif El-Rouby” for 45 days pending Case No. 1111 of 2020.

“El-Rouby” had previously spent a year and a half in pretrial detention, pending Case No. 621 of 2018. He was released in 2019 and investigated in the current case based on a decision by the Public Prosecution to arrest and bring him.

The same Circuit decided to release the member of Al-Dostour Political Party “Ahmed Saber Ghandour” with imposing precautionary measures into Case No. 1956 of 2019.

In the same context, The Council Chamber of The Criminal Court renewed the detention of “Ahmed Hassanein Mohamed Moussa” for 45 days, pending Case No. 1475 of 2019.

It also decided to extend the precautionary measures imposed on “Hossam El-Saadany” for 45 days.

Last July, The Criminal Court released “El-Saadany” in Case No. 535 of 2020, Supreme State Security, with precautionary measures represented in going to the police station two days per week for three hours.

“El-Saadany” was arrested from his house in Alexandria on March 25, 2020, he remained in pretrial detention until he was released on last July 13.