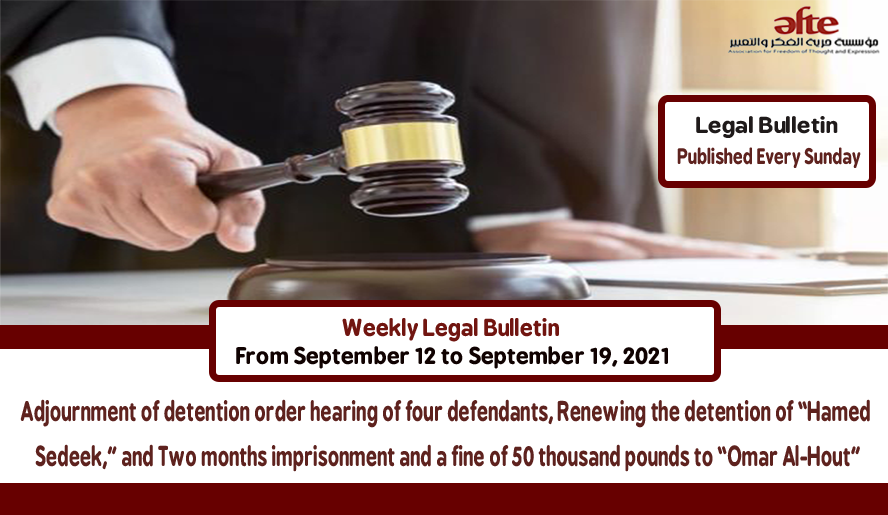 Adjournment of detention order hearing of four defendants, Renewing the detention of “Hamed Sedeek,” and Two months imprisonment and a fine of 50 thousand pounds to “Omar Al-Hout.”

Due to the inability to transfer the defendants from their prison cells to attend the renewal hearing, The Criminal Court adjourned the hearing of the detention order of “Belal Abdel Razek” and “Mohamed Gaber Soliman,” pending Case No. 488 of 2019, to September 19’s hearing.

The Security forces arrested “Soliman,” a member of the High Committee of the “Strong Egypt” Party, from his workplace on September 25, 2019, to appear in The Supreme State Prosecution pending the case mentioned above.

While “Abdel Razek” was arrested on March 1, 2019, by security forces in civilian clothes, against the background of participating in a vigil in the area of Mohamed Naguib in Alexandria.

For the same previous reason, The Criminal Court also adjourned the hearing of detention order of both “Ayman Mahmoud Abdel-Halim” and “Kholoud Saied Amer” pending Case No. 1017 of 2020, to October 4’s hearing.

Notably, both defendants were rotated in this case, as “Abdel-Halim” was detained pending Case No. 12587 of 2018 Second Montaza administrative. On December 12, 2020, the attorney general of Montaza Prosecution issued a decision to release him after being detained for more than two years, which is the maximum period.

While implementing his release procedures, he disappeared from Montaza Second Police Station. He was unlawfully detained for 29 days in an unknown place for his family until he appeared before the Prosecution pending the current case.

While on April 21, 2020, security forces stormed Kholoud’s house, and she was subjected to enforced disappearance, investigated, and detained pending Case No. 558 of 2020 before she was released on December 13, 2020. She was listed in the current case after less than a month.

According to Article 136 of the Code of Criminal Procedure No. 150 of 1950, as amended by Law 145 of 2006, that states “Before issuing a detention order, the investigating judge must hear the Prosecution’s statement and the defendant’s defense.”

The Council Chamber of the Criminal Court renewed the detention of the Assistant Professor at National Research Centre “Hamed Sedeek,” for 45 days pending Case No. 1356 of 2019, Supreme State Security.

“Sedeek” was arrested from his house on September 23, 2019, and he suffers from harsh detention conditions in Al-Aqrab Prison, in addition to being prevented from doing outdoor sports and receiving letters and books according to his lawyers and family’s testimonials.

Since his arrest in 2014, “Al-Hout” has faced a long series of violations represented in being rotated five times and intransigence in releasing him despite serving his prison sentence.

He was first arrested pending report No. 5736 of 2014 New Cairo First Administrative. After a period of pretrial detention, a decision was issued to release him on a financial bail of ten thousand pounds. Still, the decision was not implemented, and he was subjected to enforced disappearance.

Then he was rotated pending another Case, No. 3557 of 2013. He faced charges of demonstrations inside Zagazig University, and he was sentenced to five years in prison and five more years of probation, which ended on January 5 last year.

While he was transferred from Wadi el-Natrun Prison to Abu Kabir Police Station to carry out his release procedures, he was illegally detained, and he was listed in Report No. 1607 of 2020 State Security Misdemeanor. He was charged with joining a terrorist group, promoting its ideas, and possessing publications.

And instead of releasing him for serving his sentence, he appeared again in the prosecution pending Report No. 3139 of 2020, with the exact previous charges, and the court decided to imprison him for two months.

And after serving his sentence, he was listed in the fifth Report No. 1044 of 2021, and he was sentenced to 3 months in prison, to be listed again pending the current report with a two-month prison sentence issued against him.