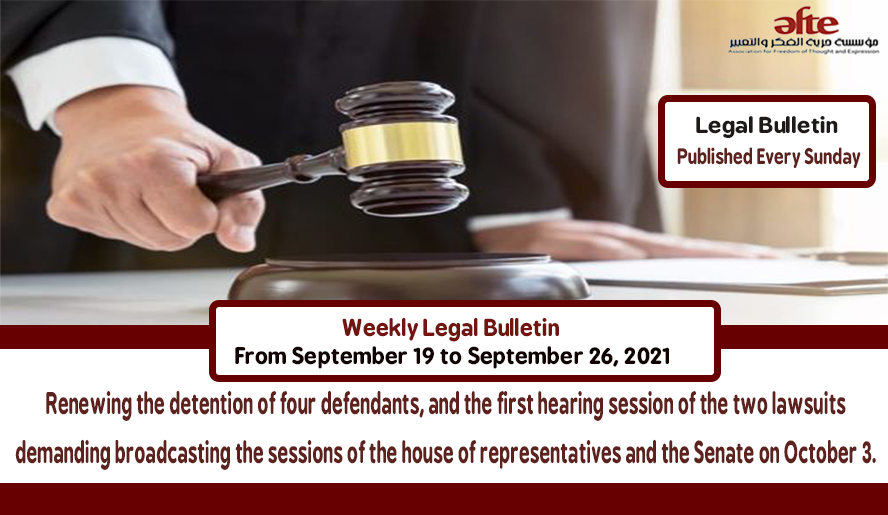 Renewing the detention of four defendants, and the first hearing session of the two lawsuits demanding broadcasting the sessions of the house of representatives and the Senate on October 3.

The Criminal Court (The Council Chamber) renewed the detention of “Belal Abdel Razek” and “Mohamed Gaber Soliman” for 45 days, pending Case No. 488 of 2019, Supreme State Security.

The renewal decision came across that “Abdel Razek” exceeded the maximum period of pretrial detention according to the Code of Criminal Procedure, as security forces in civilian clothes arrested him on March 1, 2019, against the background of participating in a vigil in the area of Mohamed Naguib in Alexandria.

And also arrested “Soliman,” a member of the High Committee of the “Strong Egypt” Party, on September 25, 2019, from his workplace in the 10th of Ramadan City.

It’s worth noting that the concerned investigation authority can replace the pretrial detention with one of the precautionary measures stipulated by law.

It also renewed the detention of two defendants of Case No. 751 of 2020 Supreme State Security, Known as “Ultras White Knights Case,” for 45 days.

According to the police report, the events of the case date back to several fans’ attempts to revive the group’s activities again, after the group had announced the final dissolution of its activities in 2018. Egyptian law prohibited the ultras groups in 2015 against the Air Defense Stadium events that led to 22 kills.

The security forces arrested the defendants at various times against the background of arrest warrants by the prosecution to arrest and bring them pending case investigations.

The Administrative Court (The Council College of Commissioners) has set the following October 3 hearing to be the first hearing session of the two lawsuits filed by AFTE’s lawyers against House of Representatives and the Senate speakers.

Challenging the negative decision not to broadcast the parliamentary sessions on television and digital platforms and refraining from archiving the transcripts of the sessions or publishing them in the Official Gazette or digitally.