Guide to legislation of internet governance

First: The internet and its legislation in Egypt

Second: The shortcomings of internet governance in Egypt

Third: Governance and regulation of the internet globally

Fourth: Agenda for the Egyptian legislature

The Association for Freedom of Thought and Expression (AFTE) is presenting this guide to the legislation of internet governance to members of the House of Representatives and the Senate, with the aim of widening their knowledge and raising awareness of the importance of protecting digital rights. The guide reviews the key principles and standards that regulate digital rights.

The cyber laws in Egypt reinforce human rights violations. Foremost of these laws is the Law on Combating Information Technology Crimes, known as the cybercrime law, which codifies internet censorship and monitoring of internet users.

Because of these legislative trends hostile to digital rights, the legislature should be aware of the significant discrepancy between the reality governing internet regulation in Egypt and relevant international standards. This guide focuses, as a first step, on opening discussion with lawmakers from both the House of Representatives and the Senate on cyber laws in Egypt.

First: The internet and its legislation in Egypt 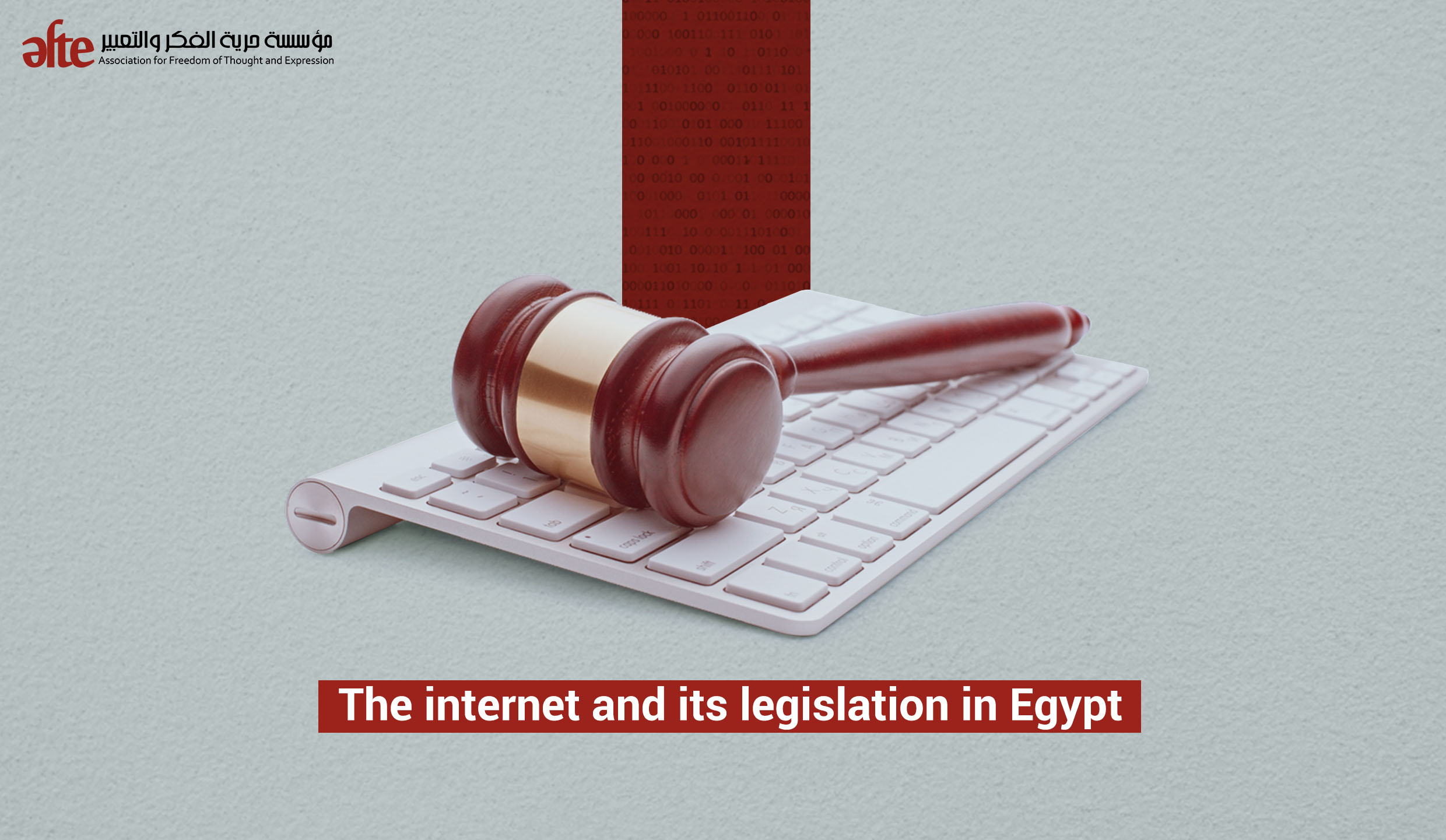 The internet imposes its presence in all aspects of life in a way that goes beyond the need to state this fact. However, regulation of the internet is an issue that needs an organized and conscious framing. Internet governance in Egypt is important in light of the legislature’s obligations, which vary between articles of the constitution, development plans, and binding international covenants.

Articles 25 and 28 of the Egyptian constitution drew attention to the importance of regulating the internet. The government has become obligated to eradicate digital illiteracy, and promote information activities as a basic component of the national economy along with other economic sectors. This trend has been established in the current frameworks of development in Egypt, such as the national strategy for human rights that pledged to rely more on technology in the main public functions and services in the field of litigation and the so-called Egypt Digital Justice project.

The Sustainable Development Plan “Egypt 2030” also includes goals related to citizen empowerment, through reliance on technology and internet services, with a commitment to reduce the digital gap between local and global rates. This is consistent with Africa’s 2063 development agenda, which aspires to expand internet networks of all kinds, and rely on electronic technology in providing services to the public. These commitments are inseparable from the awareness of international organizations, such as the UN and its agencies, of the role played by technology.

This requires the policies and legislation regulating the internet around the world to be developed, especially as technology plays a role in shaping the future of international and commercial cooperation between countries, as well as in the delivery of basic services to citizens in times of crises, as happened during the Covid-19 crisis.

The Middle East and North Africa region has recently attracted global technology companies, making it necessary to strike a balance in any regulation of technology and its services in a way that preserves economic opportunities and protects the rights of users.

Second: The shortcomings of internet governance in Egypt 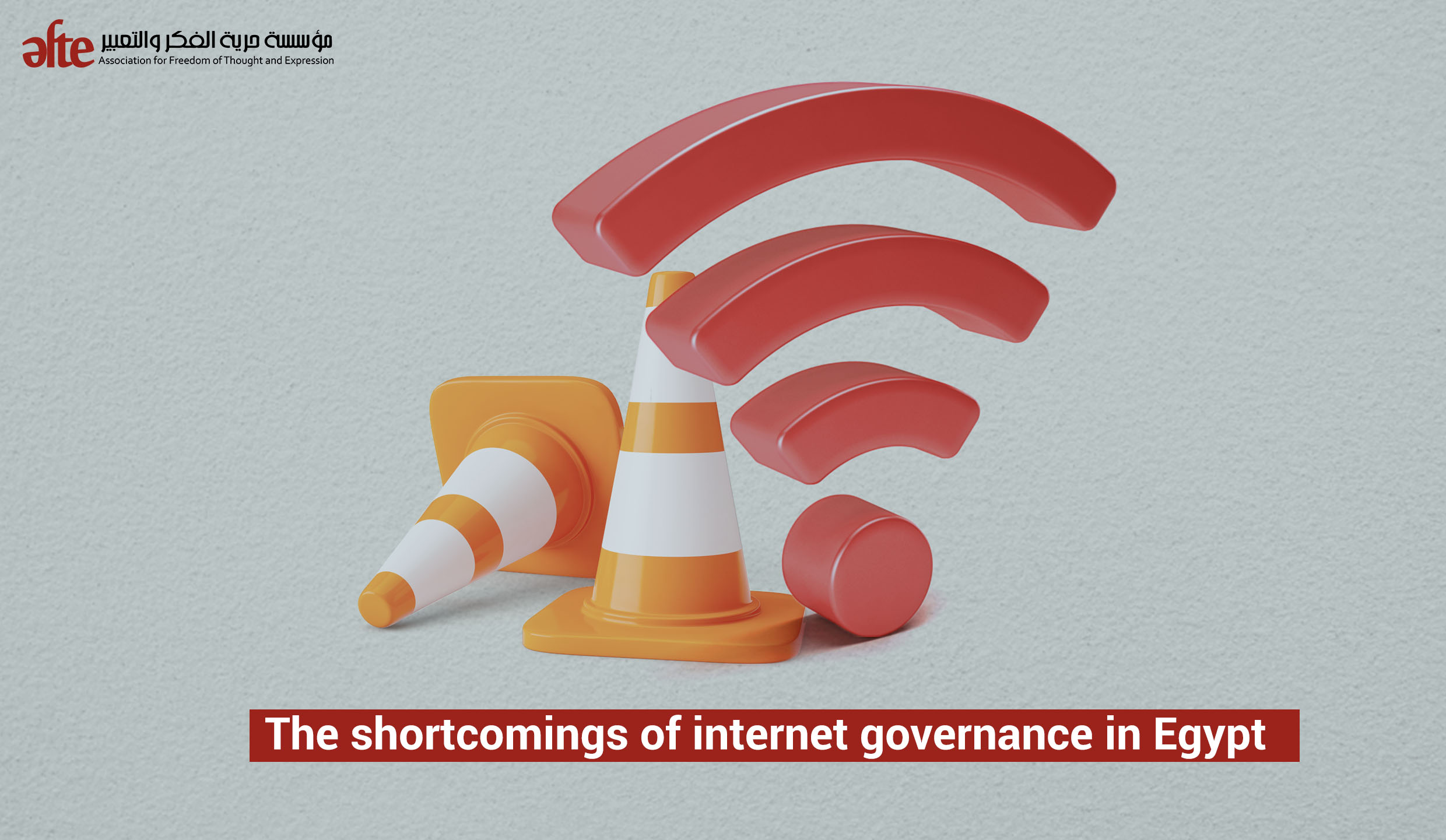 Since the internet entered Egypt in the 1990s, the regulation of the service has been subject to the Telecommunication Regulation Law No. 10 of 2003, which regulates everything related to communications and information technology. Later in 2018, Law No. 175 on Combatting Information Technology Crimes was issued to track cybercrimes.

The internet service in Egypt has undoubtedly developed, especially as the government is planning to expand its reliance on technology through projects like Digital Transformation, Egypt Digital Justice, and electronic litigation. However, this development is taking place on the ground without a legislative framework expressing it and clarifying the users’ rights and obligations.

Moreover, there is a lack of sufficient information and data to hold serious and fruitful discussions about the best ways to regulate the internet in Egypt and to set the responsibilities, rights and duties of users.

This lack of transparency can be attributed to the fact that the communications and information technology sector in Egypt is treated as a national security sector, which is not consistent with the nature of the internet as a primary means of human communication and economic activity.

The ISPs and the official regulators of the telecommunications sector – albeit to a lesser extent – share responsibility for not disclosing accurate details about how the internet services are managed. There is also lack of information about the users’ obligations, the terms of use, and the contractual clauses. This makes it difficult to hold public discussions about the users’ demands and how to address them legally.

Third: Governance and regulation of the internet globally 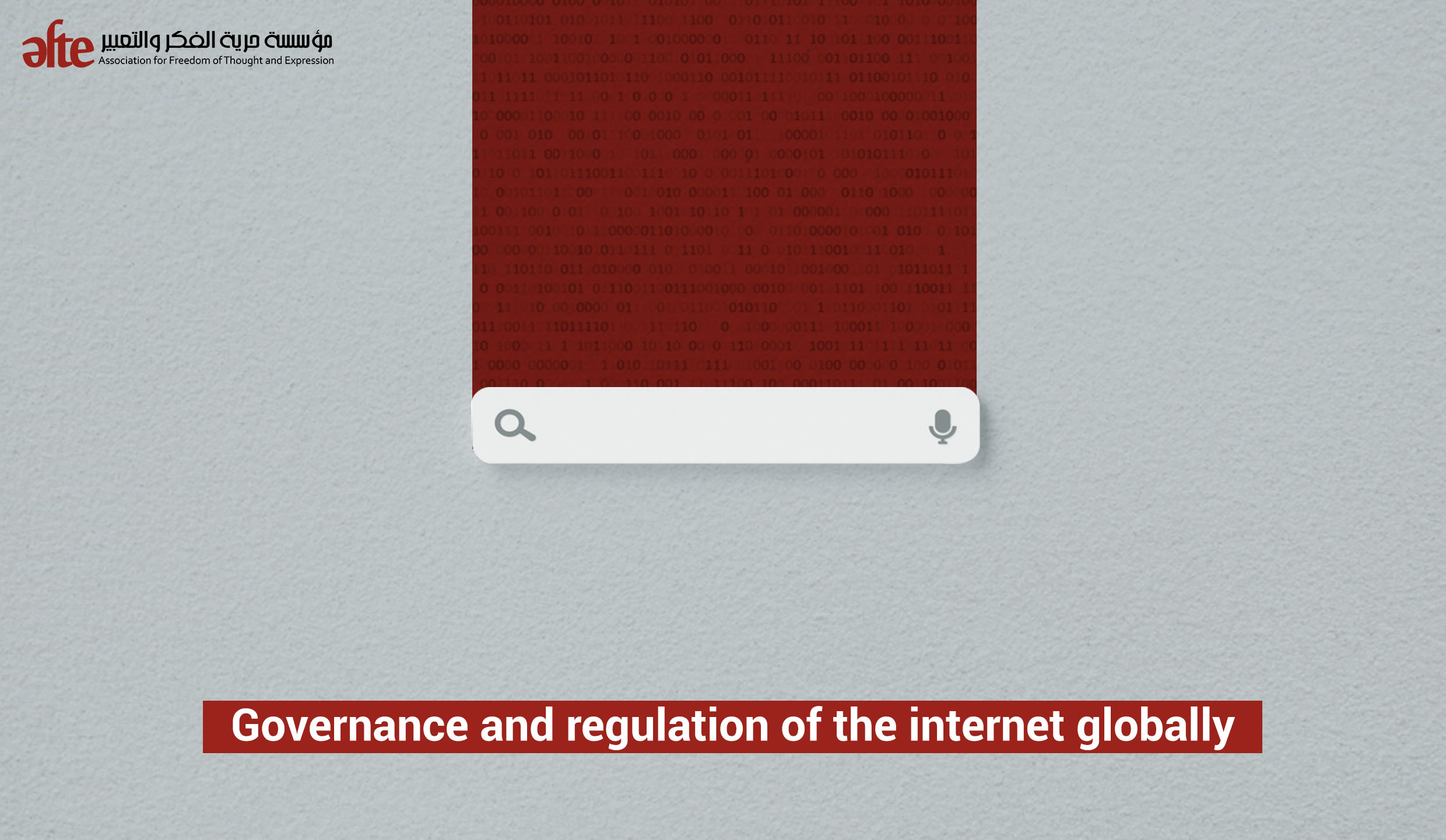 The various UN guiding frameworks call for internet governance and the adoption of legislation and public policies to ensure that the internet is inclusive of all social sectors, in a manner that guarantees the rights of users. This started with the Declaration of Principles of the World Summit on the Information Society (WSIS) in 2003, which recommended a number of principles that should be considered when regulating the internet service.

Although the general principles were overall, they revolved mainly around two main considerations with the aim of advancing the discussion about public policies and legislative regulation of the internet. These included the cooperation among governments and other stakeholders to develop information society policies, and the development of information and communication infrastructure as an essential foundation for an inclusive information society.

The general principles of this declaration were further crystallized with the recommendations of the Working Group on Internet Governance (WGIG) in 2005, which revolved around four main issues:

Fourth: Agenda for the Egyptian legislature 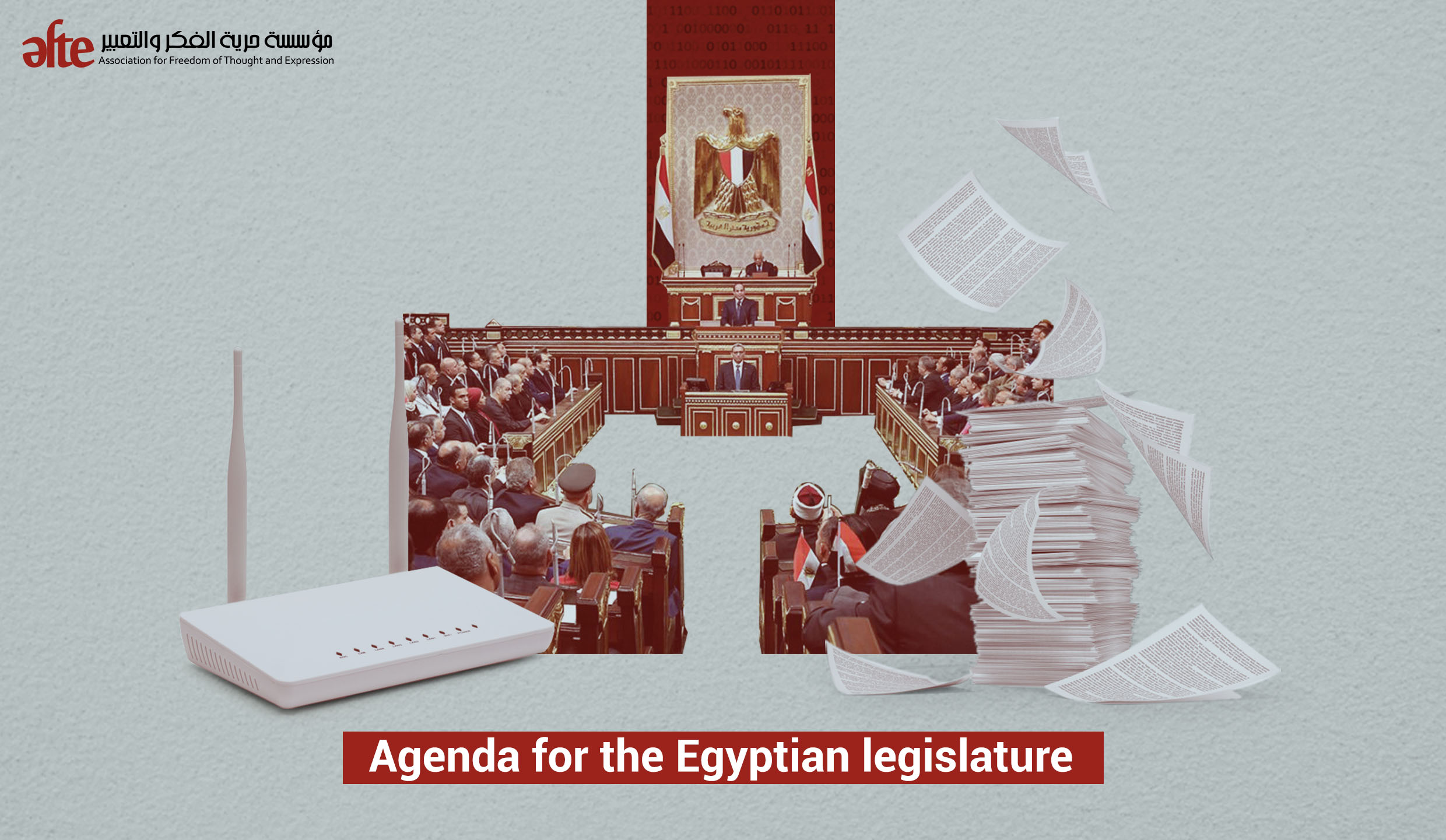 AFTE believes that the Egyptian legislature has an opportunity to enact legislation in favor of internet governance and guaranteeing digital rights. The following steps might help achieve that goal:

Concerning the content, AFTE believes that the Egyptian legislature should intervene in the legislative regulation of several issues in the internet market, in line with the actual practices and global trends in this regard. This can be achieved by starting to develop the current Telecommunication Regulation Law No. 10 of 2003. The laws regulating the internet service should include the following points:

On the other hand, AFTE suggests that the government’s endeavours to enhance digitalization should be legislatively regulated without being limited only to executive policies. This should apply to projects like Digital Transformation, Egypt Digital Justice, electronic litigation, and electronic prosecution services to ensure the discipline of policies and their compatibility with global trends.

AFTE hopes that this guide will contribute to increasing the opportunities for legislative approaches to digital rights and clarifying how these rights relate to various interests and fields. It calls on interested lawmakers to review the research and studies it previously published, as this can help achieve landmark legislative reforms in favor of internet governance and guarantee digital rights.