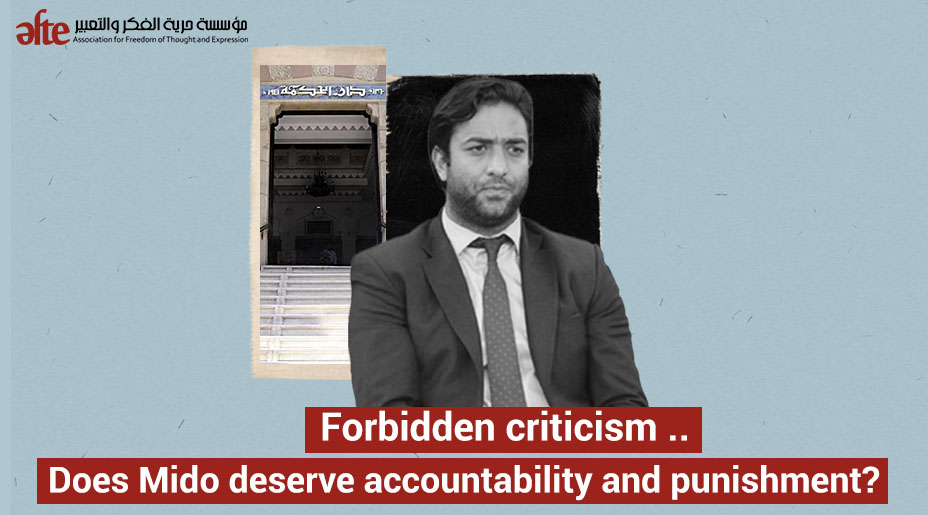 Prepared by: Mostafa Al-Aasar, a researcher at AFTE’s Monitoring and Documentation Unit

Does Mido deserve accountability and punishment?

Medical Syndicate abuses freedom of expression, while the Supreme Constitutional Court defends it

The paper monitors and analyzes media reports that tackled the statements of sports journalist and former footballer Ahmed Hossam (Mido), which the Medical Syndicate considered offensive to doctors. The paper also analyzes the rulings of the Supreme Constitutional Court (SCC) in Egypt in terms of interpreting the right to freedom of expression.

The Association for Freedom of Thought and Expression (AFTE) has closely followed up reactions to the remarks made by former Egyptian footballer Ahmed Hossam (Mido), in which he harshly criticized the health system in Egypt, based on his personal experience with a private hospital. The remarks angered many doctors, prompting the Medical Syndicate to take legal action against Mido by submitting a complaint to the Public Prosecutor.

AFTE reiterates its full support for the right of citizens to freely express their opinions and criticisms through digital media, especially the criticism of those in charge of providing public services. It calls on Public Prosecutor Hamada El-Sawy to drop the complaints submitted by the Medical Syndicate against Mido, especially since his remarks did not carry any incitement to violence against doctors.

AFTE also calls on the Medical Syndicate to stop being involved in conflicts that harm freedom of expression and favor punitive measures and security solutions in order to intimidate citizens not to criticize doctors.

On 14 July 2022, Mido posted a video on Instagram[1] in which he criticized some of the problems of the health system in Egypt, and the shortcoming in providing healthcare for patients especially during official holidays. Mido based his criticism on a personal experience with private hospitals. He described the health system in Egypt as a “farce”, saying that hospitals rejected some emergency cases without giving reasons. He also lamented the unavailability of senior doctors to receive patients during holidays and vacations, saying that “most doctors have no conscience”. This came after a hospital refused to receive Mido’s father-in-law, a cancer patient, because the doctors were on Eid al-Adha leave.

After Mido’s video went viral on social media, head of the Medical Syndicate Dr. Hussein Khairy[2], representing the syndicate, submitted complaint No. 176772 to the Public Prosecutor on 16 July 2022, accusing Mido of insulting and slandering Egyptian doctors, accusing them of negligence and lack of conscience by recounting incidents aimed at inciting Egyptian society against doctors, in addition to insulting state institutions, disturbing public peace, and harming the public interest. In his complaint, Khairy demanded that Mido be investigated over the aforementioned accusations.

The syndicate’s branch in Cairo followed Khairy’s suit[3], as the branch’s head, Dr. Sherine Ghaleb, submitted complaint No. 177146 to the Public Prosecutor on 14 July 2022, accusing Mido of inciting Egyptian society against doctors, and offending the reputation of Egypt and its medical institutions, which affects medical tourism in Egypt. Ghaleb demanded the application of the law and the establishment of prompt justice regarding the verbal abuse against doctors.

Does Mido deserve accountability and punishment?

The right to freedom of thought and expression is a necessary guarantee for any healthy environment and an indispensable necessity to solve the problems in any institution or system. There is no merit or logic that would push the Medical Syndicate to prosecute Mido, or try to intimidate him and his followers not to express their negative opinions on the performance of the health system in Egypt or the performance of some hospitals or doctors, based on their personal experiences.

While AFTE appreciates the efforts made by all doctors and medical staff in general in confronting a global health pandemic (Covid-19), especially in light of the deteriorating health system and the lack of medical capabilities in the country, it believes that the right way to deal with Mido’s remarks is to respond objectively to them instead of prosecuting him. In a phone interview with TV anchor Amr Adib on 17 July 2022[4], member of the Medical Syndicate’s Council Dr. Ahmed Hussein defended the Syndicate’s decision, but he agreed with Mido in many of the points he had raised regarding the deterioration of the health system. Hussein later stated to Al-Manassa website[5] on 23 July 2022 that the health system would face a catastrophe if the health ministry maintained its policies that push doctors to resign or to drop out of work so as to be dismissed from their jobs and registered under the category of freelance doctors. He pointed to the increased number of doctors’ resignations and their reluctance to work in Egypt, saying the number of resignations reached 11 per day last year. He further mentioned some of the issues that doctors face, such as low wages, administrative abuse, job insecurity, inadequate capabilities, poor workplaces, multiplicity of supervisory bodies, and others.

In a TV interview with anchor Lamis Al-Hadidi[6] on 18 July 2022, member of the Professional Ethics Committee of the Medical Syndicate Dr. Khaled Amin rejected the idea of ​​speaking publicly about the problems that citizens face in the medical sector. He denounced the posting of videos on social media to criticize doctors, urging the citizens instead to resort directly to the relevant investigation bodies to probe their complaints, particularly if the one who posts such videos is a public figure who sets a role model for many.

Amin noted that he agrees with Mido in many of the points he raised regarding the condition of the health system and poor wages, which drive doctors to emigrate.

These statements by members of the Medical Syndicate give the impression that the crisis was not in the content of Mido’s remarks, but rather in speaking publicly and using social media to express his opinion, something which would encourage others to express their opinions and criticize the shortcomings they see. Therefore, the complaints submitted by the Syndicate amounted to a clear abuse of the right to freedom of thought and expression.

Medical Syndicate abuses freedom of expression, while the Supreme Constitutional Court defends it

Legal advisor to the Medical Syndicate Mahmoud Abbas indicated, in a statement issued by the syndicate[7], that Mido had committed crimes of insult and slander and spread of false news, which are punishable by imprisonment and a fine. He said the video that Mido posted on social media would harm the public interest, disturb public peace, insult state institutions, incite against doctors, and spread panic among the people. These crimes, Abbas said, are punishable by imprisonment and a fine in accordance with Articles 102 bis, 184 and 188 of the Penal Code. He also affirmed that the crime of insult, which is punishable in accordance with Article 306 of the Penal Code, and the crime of defamation, which is punishable as per Articles 171 and 302, were proven against Mido.

Abbas’s remarks make us refer to the SCC’s ruling in Case No. 37 of Judicial Year 11, which stated: “The exaggeration of some opinions may not necessarily impede their circulation. The constitutional protection of freedom of expression – and even its end goal – regarding the criticism of those in charge of public work requires that everyone shall have access to the facts related to the public affairs, as well as all related necessary information. The public should not be denied access to these facts for fear of defaming one’s reputation, as what we add to the circle of defamation – in other than its real domains – to remove constitutional protection should be taken out of the circle of open dialogue that is guaranteed by this protection, which ultimately violates the right to access information. The criticism of public figures by reviewing and assessing their behavior is a right derived from the public oversight that stems from the vigilance of citizens who are concerned with public affairs and keen to follow their negative aspects and decide their position on them. The denial of that right would mean that freedom of criticism will only be exercised or sought by the most impulsive or the most resolute people. Nothing can impede the free open dialogue but a criminal law that imposes tough restrictions on the evidence precluding the accusation of defaming one’s reputation – in statements contained in a publication – to an extent that amounts to wasting the right to present it.”

The SCC’s ruling added: “It is also true that the coercive nature of the punishment that the state imposes on those who violate its system does not provide a sufficient guarantee for its preservation. It is dangerous to impose restrictions that affect freedom of expression, thus preventing citizens from exercising it. The path to national safety lies in ensuring equal opportunities for open dialogue to confront forms of suffering – varying in their dimensions – and to decide what solutions are appropriate for them stemming from the public will. Therefore, it was logical, and even inevitable, that the constitution favors freedom of debate and dialogue in every matter related to public affairs, even if it included sharp criticism of those in charge of public work.”

AFTE denounces the Medical Syndicate’s move to prosecute a citizen for expressing his opinion, as well as its legal advisor’s demand to punish Mido. It stresses that the security services, in besieging freedom of expression, do not differentiate between members of the Syndicate and the complainants. The Medical Syndicate itself suffered from security persecutions of its members because of their opposition to the health ministry’s policy in dealing with the Covid-19 pandemic[8]. At that time, the interior ministry arrested a number of doctors who disclosed information or published news or personal opinions that violated the government’s policies. Those doctors were investigated on charges of spreading false news and joining a terrorist group in connection with Case No. 535 of 2020 (State Security), in addition to Case 558 of 2020, known in local media as “the coronavirus case”, which involved a large number of bloggers who wrote about the pandemic or voiced support for the doctors.

A number of doctors were arrested at the beginning of the Covid-19 crisis, including Doctor Ahmed Safwat, a member of the Medical Syndicate’s Cairo branch, because of his rejection of the statements made by Prime Minister Mostafa Madbouly at the time, in which he accused doctors of negligence and causing the number of deaths to increase, ignoring the lack of medical capabilities and supplies.

AFTE reiterates its total rejection of the exploitation of criminal defamation cases with the aim of restricting the right of citizens to express their opinions freely. It calls on the Public Prosecutor to drop the complaints submitted by the Medical Syndicate against Mido. It warns that the persecution of citizens with the aim of intimidating them not to criticize doctors or the health system is a normal practice by the Medical Syndicate. It sees that this practice affects the right to freedom of expression and reinforces the restrictions already imposed by the security services on citizens in this regard.