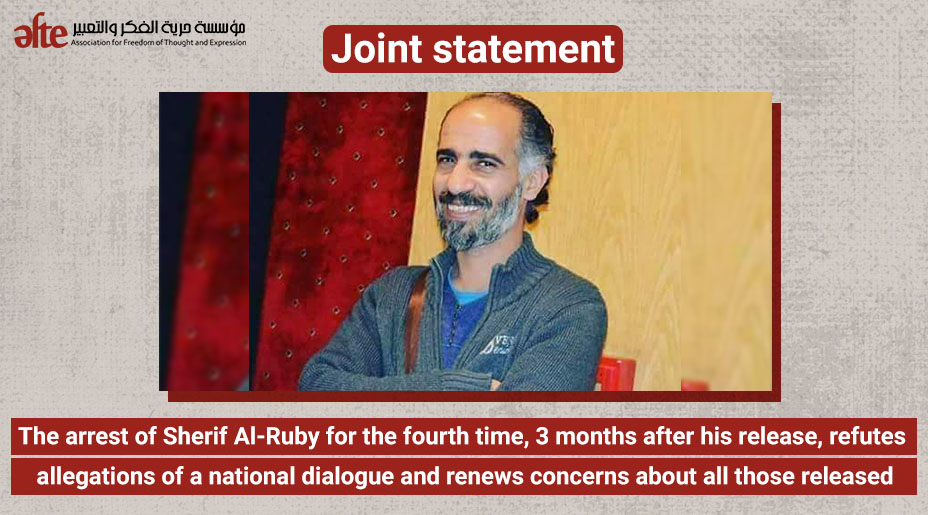 The arrest of Sherif Al-Ruby for the fourth time, 3 months after his release, refutes allegations of a national dialogue and renews concerns about all those released

The undersigned human rights organizations condemn the arrest of political activist and leading member of the 6th April youth movement, Sherif Al-Roubi, just three months after his release, after a year and a half of pretrial detention. The organizations assert that the continuation of these practices belies allegations by some about a human rights breakthrough in Egypt, and contradicts the declared efforts of the Presidential Amnesty Committee and its endeavor to release political detainees.

The pre-trial detention of activist Sherif Al-Roubi is an explicit threat to all those recently released, pointing to a possible threat of repeated arrest. The undersigned organizations fear that the continued detention of political and human rights activists contradicts the declared discourse by Egyptian authorities about the intention of a serious national and political dialogue, and gives a dangerous signal about the situation of freedom of opinion and expression in Egypt, ahead of the COP27 international climate conference scheduled to be held in Egypt next November.

Political activist Sherif Al-Roubi was arrested on September 16, 2022 at dawn in front of a hotel in Ahmed Helmy Square in Central Cairo. After being disappeared for a day, Al-Roubi appeared at the State Security Prosecution and was investigated in connection with Case No. 1634 of 2022 on charges of spreading false news and joining a terrorist group.

Al-Roubi had spent nearly a year and a half in pretrial detention between December 2020 and May 2022 on the basis of the same accusations, in State Security Case No. 1111 of 2020. His current detention is the fourth time of its kind, as he was arrested for the first time in 2016 on charges of violating the protest law, and then on April 6, 2018 in Alexandria Governorate, when he disappeared for 8 days before being presented to the Supreme State Security Prosecution on April 16 for interrogation in connection with State Security Case 621/2018. On July 22, 2019, after nearly a year and a half of pretrial detention, the Cairo Criminal Court decided to release Al-Roubi with precautionary measures.

It is worth noting that Sherif Al-Roubi was expecting to be re-arrested again, as he stated in an interview with Al-Jazeera channel on September 4, 2022 that: “On the street we suffer security fears, and I am susceptible at any time if a police officer meets me, knows me and knows I have been in detention and then decides to leave me or take me directly to one of National Security offices. This actually happened two weeks ago with one of the activists.” Al-Roubi also stated that: “Any political detainee – regardless of his affiliation or orientation – upon his release finds himself in a very difficult situation; if he is a business owner or the owner of a company his work would be blocked because he is being fought by security bodies; his friends and acquaintances try to avoid him to spare themselves problems with security.”

About the suffering that released detainees face, Al-Roubi said in the same intervention; “We suffer from many problems, including financial hardship and lack of work. I tried to work in one of the Beans and Falafel popular restaurants and when the shop owner knew who I am he refused to employ me.” He continued: “I am talking here about the suffering of detainees. I am not talking about the regime nor opposition to the regime. I could be arrested after this intervention again, although I am trying to talk about the suffering of detainees and spread the word about the pains of all those who suffered with me in detention.” Regarding his own suffering, he said: “I am on a travel ban. The authorities refuse to issue me a passport. I tried to communicate with several bodies in Egypt to allow me to travel since I cannot find work. All members of the opposition are unable to live in Egypt. The security situation in Egypt is very dangerous and even our friends abroad are suffering.”

The statements made by Al-Roubi reflect the extent of violations against male and female citizens as a result of peaceful expression of their views. The matter does not stop at restricting freedom for months or years, and the attendant violations of basic rights during the period of detention, or being subjected to enforced disappearance, torture and ill-treatment but extend to ban of work opportunities, restrictions on the right to freedom of movement, and illegal arrests. The undersigned organizations call on the Egyptian authorities to stop these systematic practices against those released, and to assume their responsibilities in compensating them for the damages they sustained as a result of violating their rights.

In this context, the undersigned organizations affirm that what Sherif Al-Roubi has been exposed to, and the danger and threat facing all released activists, completely refutes any allegations that there is a real human rights breakthrough in Egypt, and completely contradicts the announced efforts of the Presidential Amnesty Committee in its endeavor to release political detainees. The organizations stress that all those recently released as part of the presidential pardon initiative are under explicit threat, and are at risk of being arrested again. We regret that such practices completely undermine any hope in the current national dialogue, resolve the claim that it is not serious, and questions the extent to which the Egyptian authorities are serious about improving the human rights situation in Egypt in preparation for the COP27 climate conference in November 2022.