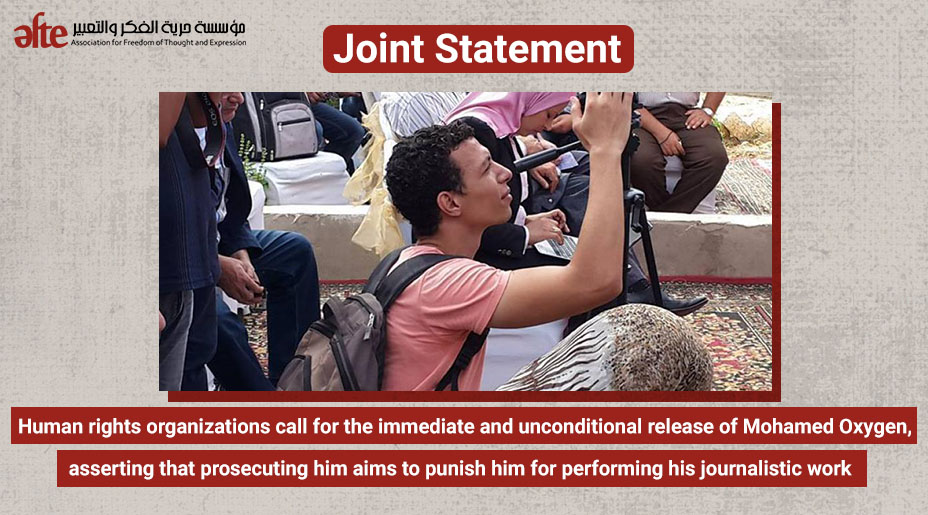 Human rights organizations call for the immediate and unconditional release of Mohamed Oxygen, asserting that prosecuting him aims to punish for his journalistic work

The undersigned human rights organizations call on the Egyptian authorities to intervene quickly to end the detention of blogger and journalist Mohamed Ibrahim Radwan, known as Mohamed Oxygen, stop all forms of violations he faces inside the prison, and to hold accountable all those involved in committing these violations that contravene the law and the constitution.

By 21 September 2022, Oxygen will complete three years of detention – in solitary confinement most of the time – in Maximum Security Prison 2, in the Tora prison complex. He was held in pretrial detention in connection with three different cases until the Emergency Supreme State Security Misdemeanor Court issued a final ruling against him, sentencing him to four years in prison.

Oxygen is an Egyptian journalist and blogger who owns the “Oxygen Egypt” blog. He is currently detained in Maximum Security Prison 2 in Cairo, known for its harsh and inhumane detention conditions. He is denied leaving his cell or being exposed to the sun. He has not had access to adequate health care and has not been allowed visits from his family or lawyers since February 2020.

Oxygen was arrested for the second time on 21 September 2019 while implementing precautionary measures at Al-Basateen police station after his detention in Case No. 621 of 2018 was replaced by precautionary measures by a decision by the Terrorism Circuit of the Cairo Criminal Court. He remained under enforced disappearance for 18 days until he appeared before the Supreme State Security Prosecution on 8 October 2019, in connection with Case No. 1356 of 2019 (State Security). The prosecution charged him with spreading false news that would harm the country, and joining a banned group, the exact charges he faced in the first case. After spending 14 months in pretrial detention, Oxygen was released under precautionary measures. The Ministry of Interior refused to implement the decision to release him, and he was “recycled from inside his prison” into Case No. 855 of 2020 to prevent him from being released.

Violations against Oxygen included arrest, enforced disappearance, torture, physical assault, illegal detention, recycling into new cases from inside his prison, detention in connection with more than one case at the same time, in addition to the four-year prison sentence issued against him.

During Oxygen’s trial, his right to a fair trial was violated in many ways, as the Supreme State Security Prosecution and the Cairo Criminal Court continued to renew his pretrial detention despite the absence of legal justifications in accordance with the Criminal Procedures Law. His lawyer was also prevented from obtaining a copy of the case papers, which undermined the lawyer’s ability to present his argument. Moreover, Oxygen was subjected to threats, psychological terror, and ill-treatment.

During his prolonged imprisonment, Oxygen tried to commit suicide inside his cell, but the prison administration saved him in the last moments. His life is still in danger, especially as his psychological condition continued to deteriorate after the death of his mother in February 2022 and his refusal to leave the prison to receive condolences.

Therefore, the undersigned organizations call on the Egyptian authorities to immediately and unconditionally release Oxygen, and to stop all forms of abuse against him. They also call on the presidential pardon committee, the National Council for Human Rights, and the Parliament’s Human Rights Committee to intervene to ensure Oxygen’s freedom by ending his prolonged imprisonment.

Association for Freedom of Thought and Expression (AFTE).

Egyptian Commission for Rights and Freedoms.