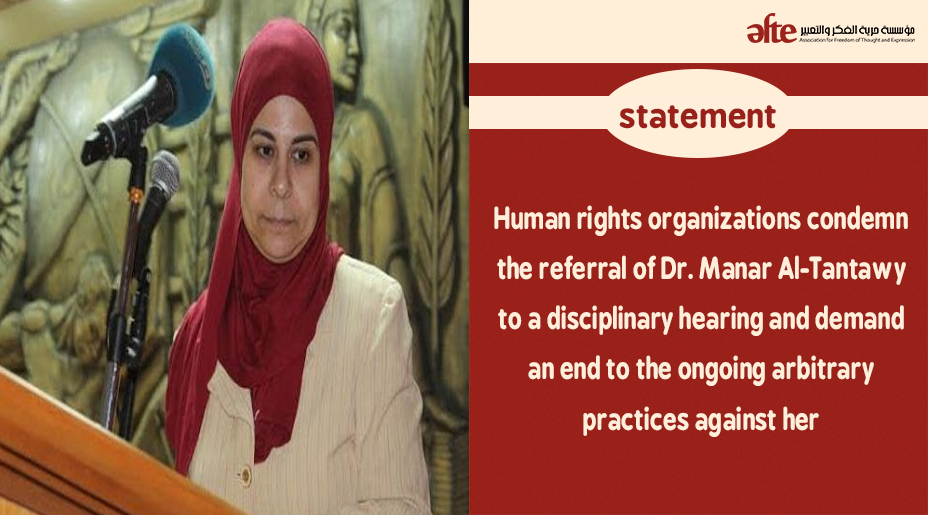 Human rights organizations condemn the referral of Dr. Manar Al-Tantawy to a disciplinary hearing and demand an end to the ongoing arbitrary practices against her

The undersigned human rights organizations condemn the decision taken by the dean of the Higher Technological Institute (HTI) in the 10th of Ramadan City to refer the institute’s assistant professor at the 6th of October branch, Manar Al-Tantawy, to a disciplinary hearing. The organizations call on the dean of the institute to immediately cancel the decision and stop the repeated arbitrary practices against Tantawy.

The referral decision was based on a legal memorandum submitted by the institute’s legal investigator after an interrogation session he conducted with Tantawy in the presence of her lawyer, which was marred by many defilements. The legal violations began with unofficially handing over two letters signed by the head of the legal affairs department at the institute’s 6th of October branch to Tantawy asking her to appear before the legal investigator at the institute, without reference to the party that summoned her to interrogation or to any accusations or incidents related to the investigation. This is a clear violation of the law and the general rule on which the legality of the penalties issued by the Supreme Administrative Court is based.

Despite these violations, Tantawy attended the interrogation session accompanied by her lawyer. However, she withdrew from the session when the investigator violated the basic legal rules, as he refused to show Tantawy and her lawyer a copy of the investigation papers and the referral decision. The investigator also rebuked them unprofessionally and refused to document the defense’s demands. He also refused, in violation of the law, to document the withdrawal of Tantawy and her lawyer, nor did he document Tantawy’s attendance. This, however, was documented by calling the police and submitting a report on the incident, carrying No. 549 of 2021, to the October First Police Station.

The decision to refer Tantawy to a disciplinary hearing, after all these illegal procedures, reflects the HTI dean’s intention to issue a negative decision that prevents Tantawy from obtaining her legal right to head the department of mechanical engineering at the institute, as she is the most senior assistant professor at the institute. The decision also reveals an intention to prevent Tantawy from obtaining a professorship degree, although she had fulfilled all the technical and procedural conditions. It aims to further abuse her, especially after her serious endeavours to get her rights.

On 2 August, the Association for Freedom of Thought and Expression (AFTE) and the Arabic Network for Human Rights Information (ANHRI) filed the appeal No. 61520 of 75 on behalf of Tantawy against both the minister of higher education and the HTI dean, appealing the negative decision not to grant her a professorship degree, despite fulfilling all the technical and procedural conditions.

Tantawy had previously assumed the chairmanship of the mechanical engineering department, but she abdicated the post temporarily for health reasons. Nevertheless, her request to assume the post again was rejected by the dean of the institute, on the grounds that she is the wife of former prisoner of conscience and journalist Hisham Gaafar.

The undersigned organizations call on the HTI dean to immediately cancel his decision on referring Tantawy to a disciplinary hearing. They reiterate their call for cancelling all the arbitrary decisions issued by the institute against her. They also call for an end to the attempts to prevent her from getting her legal right to head the mechanical engineering department at the Institute. The organizations also call for stopping to use her husband’s pretrial detention against the background of an opinion case to discourage her from claiming her legal rights, in addition to stopping refusal to grant her the professorship degree.