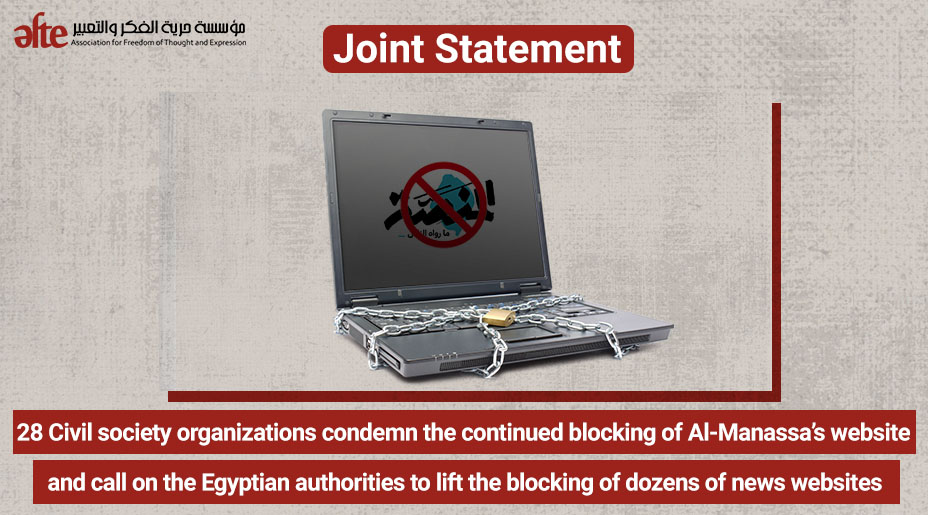 The undersigned civil society organizations condemn the blocking by the Egyptian authorities of three links to access the Al-Manassa website within approximately 72 hours, starting from Thursday, 14 July. The blocking occurs as part of a series of continued restrictions on the website, which is one of the few independent news sites operating from inside Egypt. The undersigned organizations call on the authorities to lift the blocking of Al-Manassa, stop its repeated targeting, and bring to an end the censorship imposed on other news websites.

Egyptian authorities blocked the Al-Manassa website on the evening of 14 July. First, they blocked the IP address of the hosting company responsible for the website’s domain. An alternative address was then blocked on the morning of 16 July, only three hours after it was launched. A third address was repeatedly blocked, bringing the total number of times access to the website has been blocked to 15.

The recent actions came 11 days after Al-Manassa had revamped its website with a new design and new features, coinciding with the publication of opinion articles by a number of journalists and politicians, including Hafez al-Mirazi, Lilian Daoud and Ahmed al-Tantawy. On the day the website was blocked, it had published an article by Tantawy about the absence of oversight mechanisms to hold the President of the Republic accountable. It had also published a number of features, including one documenting the reinstating of a policeman convicted of torturing and killing citizen Magdy Makin and tracking how he had forged official documents to his work in a police station in order to conceal his crime in violation of the law. The policeman had been released earlier under a presidential pardon.

The undersigned organizations stress that the targeting and blocking of news websites are not commensurate with the official rhetoric announced through the National Dialogue, nor commensurate with the realization of human rights and political reforms. No real dialogue can be held without guaranteeing media freedoms or ending the blocking of news sites in Egypt, where at least 129 news websites have been blocked by authorities so far. Though the general coordinator of the National Dialogue, Diaa Rashwan, has stated that he will follow up on the blocking of Al-Manassa’s website, he has not committed to recommending that the blocks on websites be lifted through the National Dialogue mechanism.

Following the establishment of the Supreme Council for Media Regulation (SCMR) in October 2018, a body that is responsible for licensing websites, Al-Manassa applied for a license and paid the required fees, but did not receive a response. In August 2020, Al-Manassa responded to the SCMR’s call for all websites that had previously applied for licenses to re-apply using new application forms, after the issuance of the executive regulations of the law. Nevertheless, it has not received a response so far.

In May 2017, the Egyptian authorities launched a massive campaign to block news, political and human rights websites. They also blocked a large number of websites that help users bypass blocks on websites. The total number of blocked websites and links has reached 558, according to AFTE. No government agency has so far announced its responsibility for these blocking decisions.

The undersigned organizations affirm that the Egyptian authorities’ continued practice of blocking websites exacerbates the violation of the right to media freedom and the right of citizens to know, access information and use the internet, all of which are protected by Articles 57, 65, 68, and 71 of the Egyptian constitution.

The undersigned organizations reiterate their call for the Egyptian authorities to immediately stop internet censorship, end the blocking of news websites, and guarantee freedom of the press.