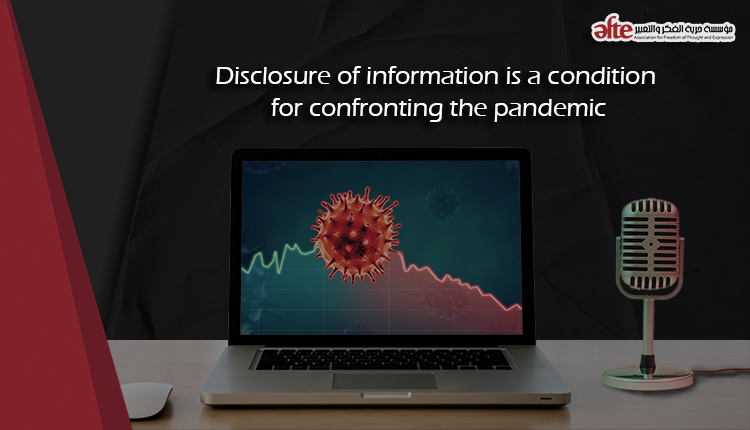 Position paper: Disclosure of information is a condition for confronting the pandemic

The threat of Covid-19 is increasing around the world. In Egypt, the lack of disclosure of information related to the spread of the pandemic aggravates the crisis. The number of Covid-19 infections has increased since the second wave of the pandemic started more than a month ago. Media reports and various medical sources say the infection rates are much higher than those officially announced. The health ministry just releases its brief daily report on the number of infections, fatalities, and recoveries.

Officials continue to make statements about infections and warn citizens in a way that makes it difficult to distinguish between the official figures and the estimates of this or that official. Meanwhile, the Egyptian authorities have not dedicated a specific website to publishing and updating information about the pandemic constantly.

The Association for Freedom of Thought and Expression (AFTE) believes that disclosure of information is essential to confront the pandemic, as this contributes to raising citizens’ awareness and mobilizing the capacities of the health sector and civil society, in addition to organizing the work of state institutions and the private sector under appropriate measures.

Since March 2020, the Egyptian authorities have announced the spread of Covid-19 in the country, and the cabinet has taken appropriate measures. The infection rates decreased during the summer, according to official statistics, signalling that the pandemic was on its way to end without major losses. This information reassured the citizens, and the government institutions resumed their normal business after a period of partial lockdown that lasted only several weeks.

The second wave of Covid-19 began in Egypt in November 2020. Media reports revealed that the reported infection rates did not match the deaths. Other reports indicated an increase in death rates in May, June and July 2020, with an average of 60,000 deaths compared to the same period in previous years. Doctors attributed this to the failure to record the Covid-19 deaths that did not perform the PCR testing at the health ministry laboratories.

Doubts increased about the credibility of the information announced about the spread of the disease, as some media reports talked about the infection of entire families, in addition to the high death rates among doctors, prompting media figures to warn that the situation is serious. The head of Egypt’s Judges Club also called on the authorities to disclose information about the pandemic. As of 26 December, Egypt has recorded 131,315 infections, including 7,352 deaths.

The director of the central laboratories at the health ministry said that “nearly 1.5 million PCR tests have been conducted in Egypt since the outbreak of the pandemic”. She gave no details about the geographical scope or the timescale of these tests.

Egypt has weak healthcare capabilities and poor public health policies. The Covid-19 pandemic has left heavy burdens on doctors and healthcare workers, amid limited capabilities and resources available for them to deal with the spread of the disease. Information blackout has negative impacts, especially on public awareness, as the announcement of limited infection rates leads citizens to pay no heed to precautionary measures and social distancing.

On 17 May 2020, the World Bank agreed to provide $50 million to Egypt in support of Covid-19 emergency response under the new fast-track facility approved by the bank to confront the pandemic. The statement issued by the World Bank said the funds will support procuring and distributing medical equipment and supplies, health worker training, and developing contextualized messaging platforms and tools to improve public awareness of Covid-19 prevention. However, the Egyptian authorities have not clarified the aspects of spending and their impact on the efficiency of the measures taken to confront the pandemic, until the publication of this paper.

Moreover, some officials have made misleading statements, with some arguing that the high infection rates would give immunity to people, and others ascribing the high death rates in Egypt to the death of people with chronic diseases who were afraid to go to hospitals to avoid infection with Covid-19.

The Egyptian authorities launched a crackdown on social media users and doctors who criticized the public health policies or the way the government handled the pandemic. Dozens were detained after being interrogated before the Supreme State Security Prosecution, and some doctors underwent administrative investigations for publishing information about the health sector conditions.

The interior ministry refused to disclose the number of Covid-19 infections, deaths, and tests in prisons and detention centres, or even the measures taken to protect the prisoners. The Administrative Court is looking into a lawsuit filed by AFTE on behalf of Mahmoud Shehata, a student imprisoned in the high-security Minya prison. AFTE requested that Shehata’s family be informed of all information and preventive measures taken by the Prisons Authority and the interior ministry to prevent the spread of Covid-19 inside prisons.

On 8 December 2020, the Regional Emergency Director for the World Health Organization’s Regional Office for the Eastern Mediterranean, Rick Brennan, said that the number of Covid-19 cases recorded by Egypt’s Health Ministry does not reflect the actual figures of infections in the country. The Egyptian authorities violate the right of access to information, which is guaranteed by Article 68 of the Egyptian constitution which states: “Information, data, statistics and official documents are owned by the people. Disclosure thereof from various sources is a right guaranteed by the state to all citizens. The state shall provide and make them available to citizens with transparency. The law shall organize rules for obtaining them, rules of availability and confidentiality, rules for depositing and preserving them, and lodging complaints against refusals to grant access thereto. The law shall specify penalties for withholding information or deliberately providing false information.”

Disclosure of information is a condition for confronting the pandemic

If the Egyptian authorities disclose information, state institutions can then take the right measures, such as closing certain government offices and preventing direct contact with the public in the most affected sectors. Civil society can also direct its efforts to the most needy areas or groups that may not be able to access the medical care provided by the government. Disclosure of information also enables the private sector to properly adjust the way it contacts the public, in order to avoid failure to provide services and to curb the spread of infection among its workers.

Depriving citizens of the information necessary to save their lives is a deliberate violation of human rights, and those responsible for that must be held accountable, especially the prime minister and the health minister. A statement issued by the World Health Organization and other international organizations said: “We call on member states to develop and implement action plans to manage the infodemic by promoting the timely dissemination of accurate information, based on science and evidence, to all communities, and in particular high-risk groups; and preventing the spread, and combating, mis- and disinformation while respecting freedom of expression.”

This call, which is adopted by international organizations and the United Nations, stresses the importance of disclosure of information in order to confront the Covid-19 pandemic.

On the other hand, the Egyptian authorities refuse to pass a law on the dissemination of information, although the law has been drafted by the Supreme Council for Media Regulation since 2017. However, the draft law remained locked in the prime minister’s drawers and was not submitted to the outgoing parliament. The House of Representatives (parliament) did not discuss a similar bill on the dissemination of information submitted by a former MP.

AFTE is following up the increasing risks associated with the second wave of Covid-19, and it believes that this should prompt the Egyptian authorities to change their approach of withholding information. It urges the authorities to disclose the details of infection and death rates, the circumstances associated with the spread of infection, and the means of receiving treatment. It presents the following recommendations to the concerned bodies: