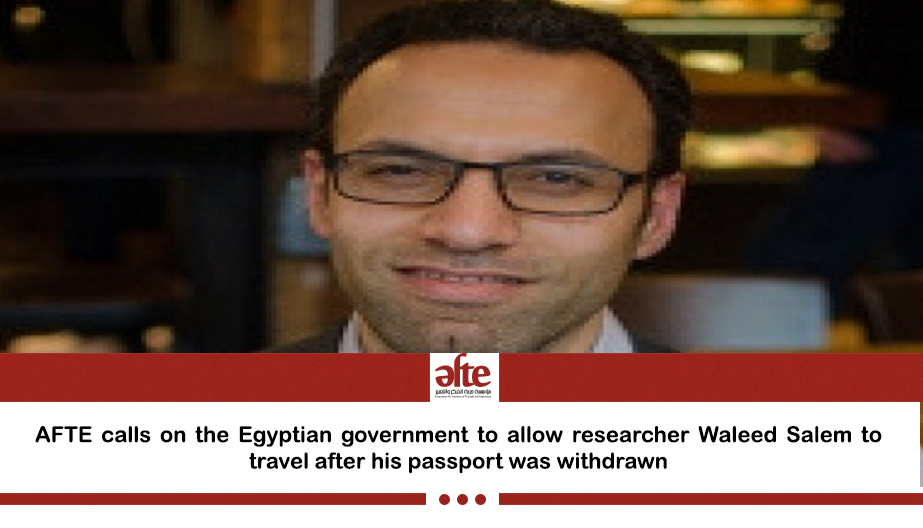 The Association for Freedom of Thought and Expression (AFTE) calls on the Egyptian government to allow Waleed Salem, a PhD researcher at Washington University, to travel after his passport was withdrawn by the Cairo International Airport authorities on May 8, 2020.

Salem said that he booked to travel on an exceptional flight by Egypt Air on May 8, but the National Security Agency at the airport stopped him, searched his bags, withdrew his passport, and prevented him from traveling without expressing clear reasons or a judicial order. The security officials informed Salem that he would be contacted later to get back his passport, but this has not happened yet.

Salem was arrested on May 23, 2018, after meeting a university professor, as part of his doctoral research. Then he appeared in the State Security Prosecution, as a defendant in case No. 441 of 2018, Supreme State Security. He was accused of spreading false news and joining a terrorist group.

Salem was confined in Tora prison for six and a half months until he was released pending investigations on December 3, 2018 with precautionary measures; his release procedures were effectively ended on December 11, 2018. On February 22, 2020, the Supreme State Security Prosecution canceled the precautionary measures imposed on him and released him under guarantee of his place of residence.

Salem spent 7 months in pretrial detention at Tora Prison and 15 months pending precautionary measures, during which he was unable to return to his studies at Washington University, or see his daughter who lives with her mother in Europe, which makes the travel ban another punishment for the researcher. It is worth noting that before his visit to Cairo, during which he was arrested, the researcher had been continuously living outside Egypt for a period of more than 12 years.

It is noteworthy that the Egyptian constitution, amended in 2014, guarantees freedom of movement and travel, as Article (62) of it stipulates that:

The article stipulates that no citizen may be prevented from leaving the territory of the state except by a causal judicial order for a specified period, which did not happen in the case of Salem.

The International Covenant on Civil and Political Rights also stresses the importance of guaranteeing freedom of movement, as stipulated in its twelfth article:

“Everyone shall be free to leave any country, including his own.. The above-mentioned rights shall not be subject to any restrictions except those which are provided by law, are necessary to protect national security, public order, public health or morals or the rights and freedoms of others, and are consistent with the other rights recognized in the present Covenant”.

AFTE stresses the importance of enabling researcher Waleed Salem to travel and stopping all security interventions in the work of researchers and academics.