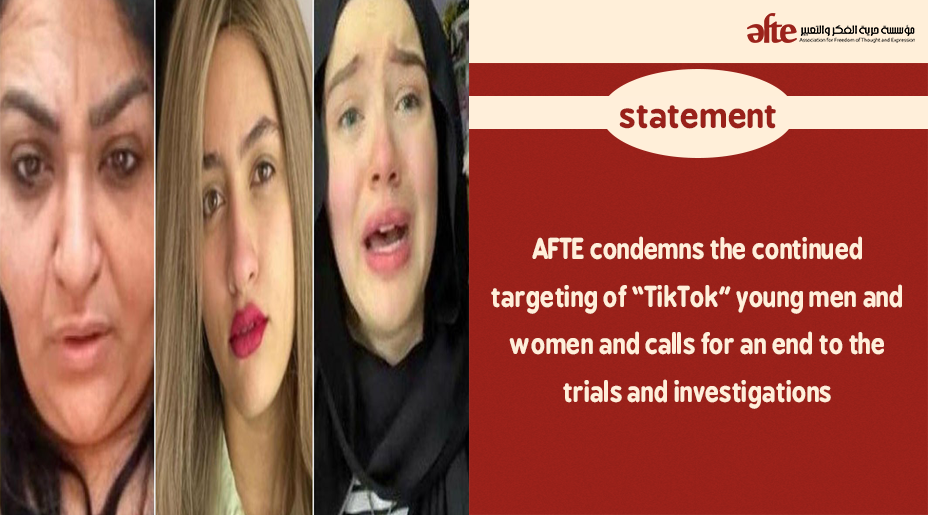 The Association for Freedom of Thought and Expression (AFTE) condemns the continued targeting and trials of TikTok content creators and their assistants, on charges of infringing on the Egyptian family principles and values, human trafficking and prostitution. It calls on the Egyptian authorities to stop the trials and investigations into these cases and to release all those detained in connection with them. Today, the Criminal Court held the first session of Haneen Hossam’s retrial on charges of human trafficking. The defence panel demanded that the case be referred to another court, as the Criminal Court had previously sentenced Hossam in absentia to 10 years in prison.

Over the past three months, AFTE documented the issuance of a ruling by the Alexandria Economic Court that sentenced content creator Yasmine Abdel-Razek, known as the “Hohos girl”, and her assistant Osama to three years in prison and ordered them to pay a fine of 200,000 pounds. The verdict came less than two months after their arrest in July 2021. Also, Moka Hegazy was arrested in the first week of last July and placed in a care home. The three were charged with using social media to publish videos infringing on family values ​​and principle and promoting immorality and debauchery, according to the accusations the Public Prosecution levelled against them.

In April 2020, the security services, in collaboration with the Public Prosecution, launched a security campaign targeting content creators on some social media platforms, most notably TikTok. Some 15 young women and men were targeted as a result of the campaign, 13 of whom were referred to trial. Ten of those are now held in pretrial detention, namely Haneen Hossam, Mawaddah al-Adham, three Likee employees Ahmed Salah, Mohamed Zaki and Mohamed Alaa, in addition to Sherifa Refaat, Nora Hesham (aka Sherry and Zomoroda), Hadeer Abdel-Hady, Yasmine Abdel-Razek and her assistant Osama.

Al-Adham’s assistant was ordered to pay a fine in the first case, and the prison sentence issued against him was revoked. He is not being tried along with Al-Adham on human trafficking charges. Meanwhile, a court decided to release Mennatallah Emad as a prelude to her retrial. Manar Samy was sentenced in absentia, and her case is still under consideration. Two content creators, namely Passant Mohamed and Moka Hegazy, are still being interrogated by the prosecution.

AFTE sees that these measures come as part of the Egyptian authorities’ move to restrict citizens’ freedom to use the internet. By these measures, the authorities aim to impose moral and political guardianship over online content, using Law No. 175 of 2018 on information technology crimes. This law contains loose terms, such as Egyptian family values ​​and national security. The Public Prosecution, moreover, established a new unit called the Monitoring and Analysis Unit, which is tasked with monitoring content on the internet with the aim of launching investigation into incidents that the Public Prosecution has reservations about.

As AFTE condemns this security campaign in which the Public Prosecution participates, it also calls on the Egyptian authorities to stop the unfair trials of female content creators, release them and their assistants, and drop these cases. AFTE also reiterates its call for the Egyptian authorities to repeal the Law on Combatting Information Technology Crimes, which is used to place repressive restrictions on the freedom to use the internet.

The trial session of Amr Socrates adjourned to December 20

A Reading in the case of Sherry Hanem and Zomoroda