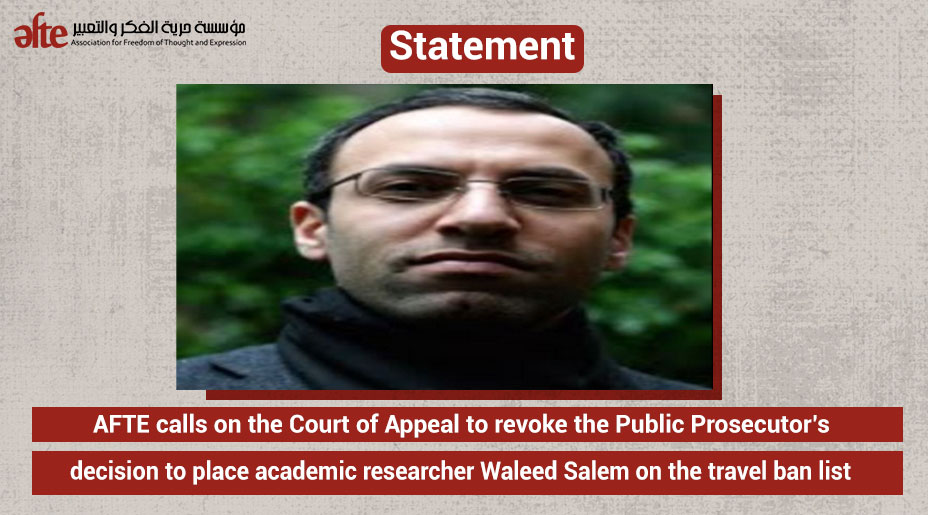 The Association for Freedom of Thought and Expression (AFTE) calls on the Cairo Court of Appeal to cancel the Public Prosecutor’s decision to place researcher Waleed Salem on the travel ban list, and to enable him to travel and resume his study at the University of Washington in the United States. AFTE had earlier filed a grievance to the Court of Appeal against the Public Prosecutor’s decision. The court registrar sent the grievance to the Public Prosecutor to complete the required information. This was the only response that AFTE’s Legal Aid Unit received over the past ten months, before AFTE’s lawyer was asked last month to file a new grievance and wait for a hearing to be scheduled.

AFTE submitted grievance No. 35309 of 2021 to the International Cooperation Department of the Public Prosecutor’s Office in August 2021. The grievance was later shelved.

Salem was banned from travelling for the first time at Cairo Airport on 8 May 2020 while he was travelling to the United States. National Security police stopped him, searched his bags, withdrew his passport, and banned him from travelling without clear reasons or a judicial order. He was informed that he would be contacted later to return his passport, which he has not received so far.

Salem was banned from travelling for the second time on 24 May 2021, when he was trying to travel again after his lawyer confirmed that his legal position was right and that his name was not on the travel ban list. However, the Cairo Airport authorities banned him again and told him that his name was placed on the travel ban list by a decision issued by the Public Prosecutor the day before, without giving clear legal reasons or a specific period for the ban.

Salem was arrested in May 2018 after meeting a university professor as part of his doctoral research about the history of the Egyptian judiciary. He appeared before the State Security Prosecution as a defendant in Case No. 441 of 2018 (Supreme State Security), where he was charged with spreading false news and joining a terrorist group. He remained in pretrial detention for almost six months. On 3 December 2018, his pretrial detention was replaced with precautionary measures. On 22 February 2020, the Supreme State Security Prosecution cancelled the precautionary measures and released him under the guarantee of his place of residence.

AFTE warns against the repeated ban of researchers and academics from travelling, and using this measure as a punishment against them. This violates the citizens’ right to freedom of movement, which is protected by Article 62 of the Egyptian constitution, the recommendation concerning the status of higher-education teaching personnel adopted by the General Conference of UNESCO in 1997, and Article 12 of the International Covenant on Civil and Political Rights that gives the right to any person to leave any country, including his own. This pattern of violation negatively affects the academic progress of researchers, as it prevents them from returning to their universities to resume their studies, and also from seeing their families in the event that the researcher’s main place of residence is where he studies, as in the case of Waleed Salem, who resides in Washington with his family.

This pattern of violation is repeatedly used as a punishment against Egyptian researchers abroad, as in the case of Patrick George Zaki, a master’s student at the University of Bologna in Italy. Zaki was arrested on 7 February 2020 while returning from Italy. He remained in pretrial detention for nearly two years before being released on 7 December 2021, pending investigation into Case 1086 (Emergency State Security Misdemeanour). Zaki cannot leave Egypt because he is placed on the travel ban list. The court has repeatedly postponed the examination of his case since he was referred to trial on 13 September 2021. The last of these postponements was on 21 June 2022 when the court adjourned the trial to 27 September 2022.

AFTE renews its call for the judicial authorities to remove Salem from the travel ban list. It also calls on the Egyptian authorities to respect academic freedom, stop crackdown on researchers, and enable them to travel freely.