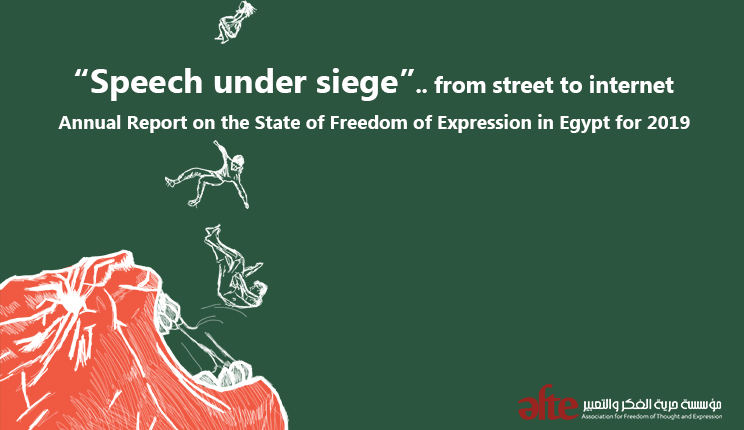 Monitoring and Documentation Unit: Wessam Atta, director of the unit and Sarah Mohsen, researcher at the unit

Section one: A reading into the violations of freedom of expression

Section two: The attack on freedom of expression during the constitutional amendments and the September demonstrations

Over the past six years -prior to this report- the current regime established its control over political life and undermined the gains of the January 25 revolution that promoted freedom of expression, public debate, and political accountability. The most recent of the regime’s steps was the issuance of legislations that violated freedom of the media and digital rights in an unprecedented manner, which the previous annual report mentioned.

It seems that the past few years, with their restrictions on freedom of expression, were not enough to ensure the stability of the current regime. The more the interest in public affairs increased, the more the Sisi regime hit hard, targeting all forms of free expression and the most interactive groups in public debate such as journalists, social media users, university professors and political activists.

It can be said that this direct relationship between the interest in politics and the violation of freedom of expression was manifested in two events throughout the year 2019. The first event was the constitutional amendments, the main objective of which was to give president Sisi the right to remain in office until 2030. The second event was a call to protest against the policies of Sisi, known as the September demonstrations. In both events the main goal was silencing critical voices, as the report shows in its first section, which reviews violations throughout the year.

On the other hand, the current regime continued to withhold information, driven by its fear of citizens expressing their opinion and seeking access to information. The parliament suspended the issuance of a law addressing freedom of information, and proposed a law to combat rumors, without answering the question of how to recognize the difference between information and rumor if the state does not disclose official information, in the first place. In addition, security or sovereign entities continue to block websites, without caring to use the repressive laws enacted in 2018.

This report is divided into two sections. The first reviews violations committed by the various state agencies regarding freedom of expression, specifically in the media, digital rights, creativity, academic freedom and the circulation of information. The second section focuses on analyzing the violations committed by the security services during two prominent political events that took place during the months of April and September.

This report monitors the state of freedom of expression in Egypt during 2019; it is the seventh periodic report issued by the association in this regard. The report relied on an analysis of the nature of violations that were monitored, documented and verified by the association’s monitoring and documentation unit, as well as the researchers’ observations and follow-up of the files that they work on throughout the year. The files in question are freedom of expression, freedom of the press and the media, academic freedom, students’ rights, freedom of information, freedom of creativity, and digital rights. The monitoring and documentation unit adopts a specific methodology for monitoring violations, as follows:

The monitoring and documentation unit’s team organizes the primary data collected, so that it is classified according to each of the topics the unit follows. This is done as an organizational stage to start the verification of each violation.

The association relies on a set of mechanisms to verify the primary data collected, which includes the following:

The monitoring and documentation unit’s team digitally archives all the violations that have been monitored, including the materials that were used in the verification, data, official papers, and the method that was followed to verify, in addition to direct testimonies from the victims or their relatives.

Violation: In its monitoring of violations, the association relies on the provisions of international conventions on freedom of expression, such as article 19 of the International Covenant on Civil and Political Rights, the basic international framework that codifies this right:

Security agencies: Include forces affiliated with the ministry of interior and the ministry of defence, and also include attacks by “pro or unknown civilians” in the presence of regular forces.

Not identified: The failure to identify the employer.

Arrest: The process of restricting the victim’s freedom, taking him to the police station, and filing a legal report.

Illegal detention: The process of restricting a victim’s freedom, taking him to a place of detention, and releasing him without filing any legal reports.

In the case of any type of collective violation -such as prevention from coverage-it is considered a case of violation of one journalist -presumably- as it intended to collectively punish the identity of the journalist and not each individual journalist. Also because of the difficulty of determining the number of journalists and their identities, especially that these violations occur almost daily, in addition to the statistical problems as it will cause the number of victims to grow abnormally.

The press organization: Every press outlet that owns a website or publication.

Remand: A Punishment for Academics of Oppositions