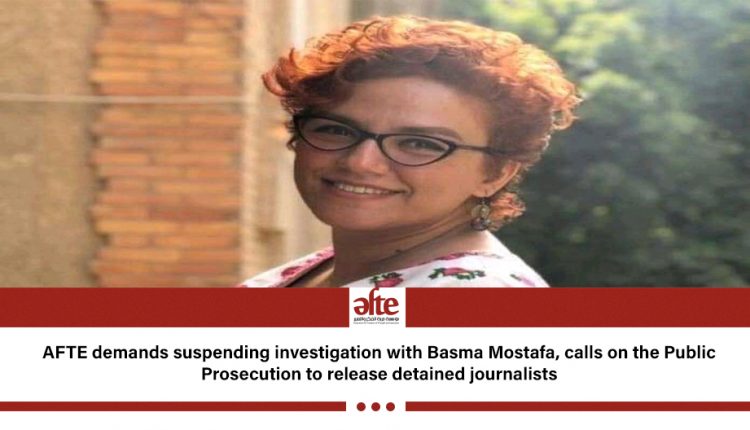 The Association for Freedom of Thought and Expression (AFTE) welcomes the decision of the Public Prosecutor to release journalist Basma Mustafa, which was issued on October 6. The Association also calls on the Public Prosecution to suspend investigations that are being held against her, as the prosecution’s statement has pointed that it will “continue investigations into the charges attributed to her of exploiting her personal account on a social media site to publish and promote false news that disturb public peace and security.” AFTE also calls on the Public Prosecution Office to release the journalists pending cases related to their work in jouranilsm.

On October 4, the Supreme State Security Prosecution decided to detain Basma Mustafa for fifteen days pending investigations. In Case 959/2020, Basma was accused of joining a terrorist group as well as publishing and broadcasting false news and statements. She was also accused of using an account on a social media site with the purpose of spreading false news and data.

Before appearing at the Supreme State Security Prosecution, she had forcibly disappeared for about a day when she was arrested at the Luxor train station, according to the last telephone conversation she had with her husband, human rights lawyer Karim Abdel Radi, at 11 am on Saturday 3 October 2020. Basma was investigating the murder of Oweis Al-Rawi, 58, in front of his house, in the Awamiya village of Luxor governorate, which took place in light of current instigations and great security tension in the village. She was arrested minutes after this call.

AFTE demands that those accountable for the arrest, detention and forced disappearance of Basma Mustafa be obliged, as she was not enabled to communicate with her lawyer, since the Luxor Police Department denied her existence, before she appeared the next afternoon at the State Security Prosecution.

The Public Prosecution statement indicated that Basma Mustafa had decided to conduct journalistic investigations – considering her work in some news sites – on social issues and issues of concern to the public opinion, including coverage of the Coronavirus pandemic, and other issues.

This was not the first time that Basma Mustafa was arrested while practicing her job, as she was previously detained for nine hours (held between Abdeen Police Department and one of the National Security Headquarters), months ago, as she was conducting an investigation for Mada Masr about protests in front of the Ministry of Health, demanding tests to detect the emerging coronavirus.

The unofficial investigation held by the National Security officer against Basma Mustafa included questions about the nature of her work, the type of press coverage that she does and what press institutions she works for. The Supreme State Security Prosecution asked Basma the same questions during their investigation, according to a member of her defence team. This clearly indicates that the reason behind pursuing Basma is related to the nature of her work in journalism.

Going after journalists is considerably one of the usual patterns of violations committed by the Egyptian authorities, 21 journalists are held behind bars for practicing journalism. The sum of charges they are accused of can be summarized in; belonging to a terrorist group and promoting its ideology as well as broadcasting false news and statements. These accusations are elastic and not specific and are not based on evidence or serious investigations, which makes it easier to direct them to anyone exercising their inherent right of expressing opinions or carrying out their jobs.

The latest incident of targeting journalists, which are indicative of the pattern followed by the prosecution, was arresting a journalist for Darb news, a website affiliated with the Socialist Popular Alliance Party. The police arrested Islam Al-Kalhy on September 9, while covering the death of a citizen inside El-Monib Police Station for Darb. Al-Kalhi was brought before the State Security Prosecution the following morning as a defendant pending Supreme State Security Case 855/20202. The State Security Prosecution charged him with spreading false news, joining a terrorist group, and misusing social media.

AFTE monitored the escalation of violations against freedom of the press and journalism-affiliated practitioners in conjunction with the outbreak of the Coronavirus epidemic, as the Egyptian authorities’ attempted to block information and impose an absolute censorship on all media content, regardless of the medium of its transmission, to ensure that the government narrative about the state’s competence in facing the Corona epidemic crisis is prevalent. Whereas AFTE’s team documented 23 violations of the rights of journalists and press institutions during the second quarter of 2020, which included 35 violations, an increase by nearly 440% over the number of incidents documented by AFTE during the first quarter of the same year, when only 5 incidents of violations were recorded.

The Association for Freedom of Thought and Expression stresses the need for the Public Prosecution to assume its responsibility towards all journalists who are held in pretrial detention on account of practicing their job, provided that the Public Prosecution’s office looks into each case separately, considering the need to stop harassing journalists through using pretrial detention and recycling cases. AFTE warns that the continued impunity for those who continue to violate the right of journalists as well as the freedom of the press will only diminish the media scene, a practice that is inconsistent with recent statements made by the State Information Minister, Osama Haikal, about the need to allow for opposing opinions and for a measure of freedom for the press and media so that they can do their part.

Information blockade in the time of social distancing.. Quarterly Report on the State of Freedom of Expression in Egypt Second Quarter (April – June 2020)