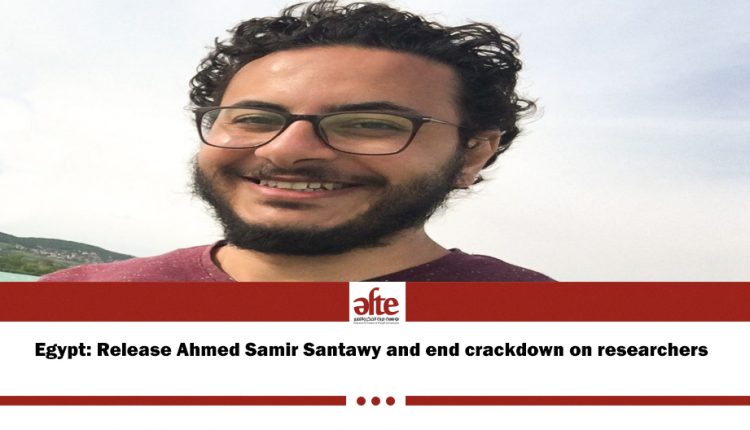 The undersigned Egyptian human rights organizations call on the Public Prosecution to release Ahmed Samir Santawy, a master’s researcher at the Central European University (CEU) in Austria, given that the investigations concerning him are not based on solid evidence. The organizations stress the need for the Public Prosecution to assume its role in investigating Santawi’s disappearance and the fact that he was beaten by National Security Agency officers.

The Supreme State Security Prosecution remanded Samir in custody for fifteen days pending investigations in Case No. 65 of 2021 on charges of “joining a terrorist group, spreading false news meant to undermine security and public order, and using a Facebook account for that purpose”.

The Cairo’s Fifth Settlement Police Station remanded Samir on 1 February after it summoned him. A force from the police station raided Samir’s house on 23 January, searched it, and seized the recordings of the house’s surveillance cameras. Santawy was on a trip to Dahab in South Sinai at the time, so the police force asked his family to tell him to go to the police station upon his return home. Indeed, Samir went to the police station on Saturday 30 January, and he was told to come again on Monday 1 February. He went again at 12 noon on Monday, and then he was forcibly disappeared for five days.

The crackdown on Egyptian researchers and their families has been on the rise. On 10 February, police raided the house of Germany-based researcher Taqadum al-Khatib, searched it, and seized his father’s phone and papers belonging to Taqadum. This comes as part of broader crackdown on researchers and teaching and scientific research staff; master’s and PhD students have been among those arrested over the past years.

Patrick George Zaki, a master’s researcher at the University of Bologna in Italy, has been held in pretrial detention since he was arrested at Cairo Airport upon his return in February 2020 to spend his holiday in Egypt. Zaki’s arrest was accompanied by widespread solidarity campaigns from academics around the world, especially in Italy. Several Italian cities have granted him honorary citizenship.

Walid Salem, a doctoral researcher at the University of Washington, was arrested on 23 March 2018, after meeting a university professor as part of his work on his research. He was released on 11 December 2018, but his passport was withdrawn and he was banned from travel. So far, he has been unable to complete his study and return to his family abroad.

The truth is still absent in the murder of Italian PhD researcher Giulio Regeni from Cambridge University, after his disappearance in January 2016. He was a visitor at the American University in Cairo to work on a doctoral thesis about the Independent Street Vendors Union as a model for independent unions in Egypt. His body was found beside a road in Cairo’s western outskirts, showing signs of torture. As a result, many international universities have become increasingly anxious to cooperate with Egyptian universities, or to send their researchers to Egypt.

The Egyptian human rights organizations stress the need to release Santawy and all researchers and university professors who are held in pretrial detention in cases that lack real indictment evidence, and without verifying the justifications and regulations of pretrial detention as an exceptional measure.

The crackdown on researchers and university professors does not only violate the practical, political, and civil rights and freedoms of members of academia but also affects the future of higher education and scientific research in Egypt as well as the country’s ability to produce advanced scientific research, in addition to isolating Egyptian researchers and professors from their counterparts around the world.

Egypt: State authorities must be held to account for violence perpetrated against detained journalist Solafa Magdy

Egypt: Enforced disappearance of lawyer Islam Salama condemned by rights organizations amid calls on the Ministry of Interior to implement his release