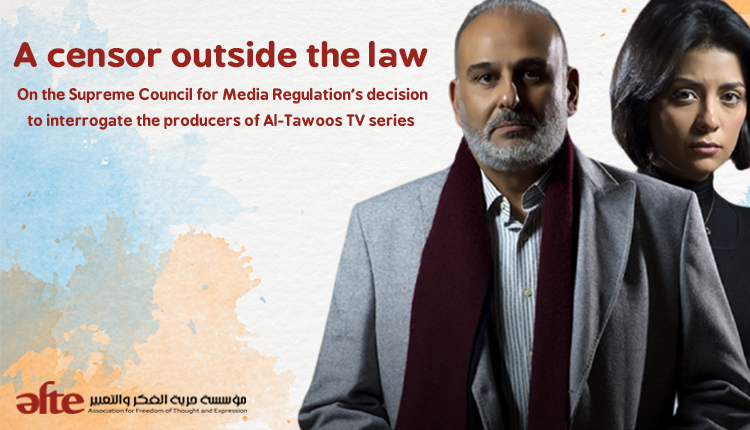 A censor outside the law .. On the Supreme Council for Media Regulation’s decision to interrogate the producers of Al-Tawoos TV series

In this paper, AFTE explains its position towards the Supreme Council for Media Regulation’s (SCMR) decision to interrogate the producers of Al-Tawoos (peacock) TV series. AFTE tries to review the legal aspects related to the censorship of drama in light of the law regulating the SCMR’s work.

The SCMR has announced the launch of an urgent interrogation of the producers of Al-Tawoos TV series as well as the channels that broadcast it (two Egyptian satellite channels) after only six episodes of the drama were shown on the screen during Ramadan. The announcement came in a statement the SCMR issued on 18 April. The SCMR said the reason for the interrogation is that the series used a language inconsistent with the professional and ethical codes issued by the SCMR, which emphasize the need to uphold the Egyptian family values and not to prejudice or degrade them or to display them in an offensive way. The series violated these codes, and the SCMR received several complaints from citizens in this regard.[1]

In less than three days, the SCMR conducted an investigation and decided to shelve the complaints against the series[2]. Some observers, meanwhile, expected the series to be suspended. But although the SCMR did not issue penalties or fines against the series or its producers, the move is considered a restriction of freedom of creativity.

Starring actor Gamal Suleiman and actress Sahar al-Sayegh, the series tackles the rape of a girl by a group of young men, and her quest to uncover the crime and prosecute the perpetrators. Some critics compared the drama to the Fairmont rape case, arguing that the drama makers attempted to shed light on feminist issues.

The controversy the SCMR’s decision stirred in the public sphere, including social media, as well as the campaigns launched by actors[3], filmmakers[4] and audiences to support the series, represents a healthy and positive case. But it also reveals the need for the public debate not to be limited to the series only, but to expand to discuss the SCMR’s role in censoring drama, which was originally assumed by the Central Authority for the Censorship of Works of Art (CACWA).

Based on the law regulating the SCMR’s work, the legality of the decision to launch an investigation into the series is fundamentally doubtful. This opens the way for spotting the difference between the powers granted to the SCMR and what it practices on the ground. This would show the broad powers the SCMR enjoys without capacity, which it uses to create new censorship standards, aiming to impose more control on the drama production market.

Before producing any audio or visual artistic work, approvals must be obtained from the CACWA, the only body legally authorized to censor creative works. According to Law No. 430 of 1955, creative works in all stages of production are subject to the CACWA’s censorship before the works are presented to the public. This applies to the idea of the work, the performance, and finally the presentation.

CACWA has previously faced problems related to the ability of its limited members to censor the mass drama production, especially in Ramadan. Sometimes, they cannot watch the whole work to ensure that it complies with the censorship standards, but they are entitled to withdraw the license of the work according to the law.

The SCMR was established in accordance with Law No. 92 issued in December 2016. It was first established as per a presidential decree in April 2017, and the goal was to establish rules and standards to regulate the journalistic and media work.

Censorship of artistic and creative works was not among its roles, according to the law that established it.

In 2018, a new law was issued to regulate the press and the media as well as the SCMR. In its first article, the law defined the bodies subject to its provisions, namely the national and public press institutions, media outlets, websites, and newspapers. The SCMR’s authority does not extend to imposing penalties on drama works, according to the Sanction Regulations No. 16 of 2019, which regulates the SCMR’s authority to impose legal sanctions.

The Law of the Media Professional Syndicate also stipulated, in its first article, that “cinematic, television, or theatrical works, or entertainment activities are not considered media activities”. The law defined media activity as “every activity that broadcasts news, information, ideas, opinions, or facts from their source via audio and visual media, with the aim of informing the public about them”. This makes the SCMR’s intervention in the content of dramas a violation, as this intervention is not of its powers according to the law.

Differences within the SCMR began only after the establishment of the Drama Committee in 2018, as the SCMR expanded its censorship activity in an executive manner without a legal basis. The law regulating the SCMR’s work continued to limit SCMR’s activity to media and press production only. Thus, the idea of ​​establishing a drama committee is illegal in the first place. This created a conflict of work and an overlap in the terms of reference between the SCMR and the Drama Committee on the one hand, and the CACWA on the other hand. This conflict resulted in internal differences between the SCMR and the Drama Committee, due to the vague powers granted to the committee. Thus, the committee’s role was marginalized, causing a wave of resignations within the committee. So, the SCMR was unable to assign the chairmanship of the committee to any of the creative people, before director Mohamed Fadel assumed the post[5].

Therefore, the SCMR’s intervention in the Ramadan drama – whether by imposing penalties on the producers or referring them to interrogation, as happened with Al-Tawoos series – is illegal. This intervention constitutes an infringement of the powers of the CACWA, which authorized the broadcast of the series after obtaining all the necessary permits. The SCMR’s intervention in drama stems from the fact that it monitors the media outlets themselves, with the various works broadcast on these outlets. This is a defect in the interpretation of the law, and this is what the SCMR used in the past to impose sanctions on TV channels for what it described as drama irregularities.

AFTE affirms that such illegal practices violate the constitution and the law, undermine the work of various bodies, and create further restrictions on the freedom of artistic and literary creativity that is constitutionally guaranteed. These practices also threaten the drama industry and its future in Egypt. The multiplicity of censorship bodies and the randomness of their work create a threatening environment for private production companies, an environment where the concerned bodies impose unlawful penalties on drama producers based on ethical standards.

At the beginning of its work, the SCMR defined six types of irregularities in drama works, namely “verbal abuse, insults and swear words, explicit sexual suggestiveness, deliberate display of obscene scenes, sexual harassment, broadcasting series that provide free lessons on how to use drugs and join the Islamic State group, political projections, and historical inaccuracies”. This came in the SCMR’s first report about irregularities in the Ramadan dramas[6].

After the formation of the drama committee, it expanded the practices that the SCMR began to implement. It was keen to surround the drama, by establishing 5 different monitoring committees to examine every dramatic scene shown on television. In addition to the 6 patterns adopted by the SCMR in 2017 to spot irregularities, the committee adopted 19 more patterns.

It is noticeable that the irregularities the SCMR is documenting are not based on a legal document or an internal regulation, but rather on the vision of those in charge of monitoring. The committee first focused on irregularities that would “tarnish the image of Egypt abroad”. After that, the tendency was to highlight the sacrifices of the army and the police, something which has been increasingly noticeable in TV drama since 2016. It seems that the next trend will be to protect the Egyptian family values[7]. The term “Egyptian family values” ​​has been widely known over the past year in accusations levelled against TikTok influencers.

AFTE has observed that the SCMR creates new accusations and censorship standards whenever the need arises, in a bid to impose restrictions on the drama makers and to produce propaganda dramas in favor of the regime. It should also be noted that the mechanism the SCMR adopts in spotting drama irregularities is serious. In addition to the monitoring committees, the SCMR set up a telephone line[8] to receive complaints and reports from citizens about drama irregularities. The SCMR urged citizens to report any irregularities, thus sharpening the citizens’ sense of censorship.

By extrapolating the laws establishing the SCMR and regulating its role, we conclude that interrogating the drama producers is an illegal procedure. Therefore, AFTE stresses that the SCMR’s illegal practices would affect the drama industry in terms of quantity and quality, and would lead the producers to refrain from producing dramas for fear of being interrogated. So, AFTE calls for an end to the SCMR’s interventions in drama and stopping the work of its sub-committees.

AFTE Files Lawsuit on behalf of “Walid Mohamed Hamid Aqlan” to Support the Decision to Designate his Residence as Place of Probation.

Egyptian rights groups demand an end to the Israeli attacks and…

The sowing of souls continues: Organizations condemning the execution…