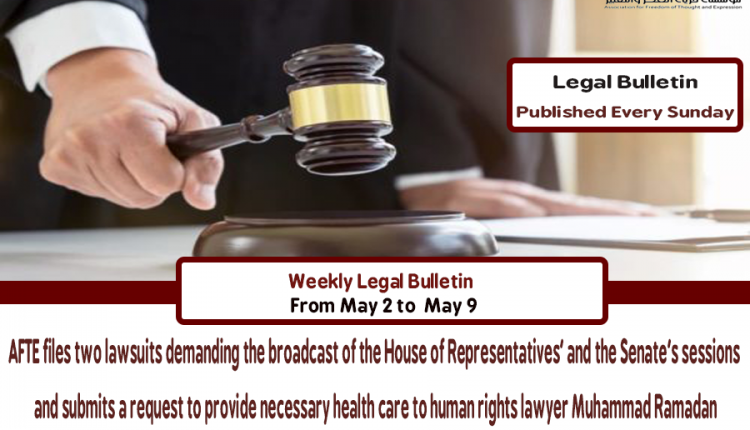 AFTE stressed the importance of ensuring multiple forms to disclose the parliamentary sessions for the public, by broadcasting them on TV and digital official platforms, in order to guarantee public oversight over MPs and enhance the political participation of citizens. In this regard, AFTE issued a detailed statement containing both full lawsuits, and called on all MPs and leaders of political parties to support its call for broadcasting the parliamentary sessions.

AFTE issued a paper on the importance of broadcasting parliamentary sessions, after the first meeting of the newly-elected House of Representatives in January 2021.

The council chamber of the criminal court renewed the detention of assistant professor at national research centre, Hamed Sedeek, pending case No. 1356 of 2019, Supreme state security. Sedeek was arrested from his house on 23 September 2019, and was previously on a partial hunger strike in the past year, due to the continued prevention of visits because of the Covid-19 procedures.

Sedeek faced harsh conditions of detention in a supermax prison “Al-Aqrab Prison”, in addition to being prevented from doing outdoor exercise and receiving letters and books.

Since last year, there were campaigns in Egypt, calling up to release prisoners, among them the political prisoners and the most likely to get infected, according to AFTE’s campaign launched in june 2020.

Sedeek is charged with spreading false news, joining a terrorist group with knowledge of its aims and promoting them, and misusing a social media tool, notably that case No. 1356 of 2019 in which Sedeek is accused, includes also both activist Alaa Abd Al Fattah and human rights lawyer Mohammad ِAl-Baqir in addition to other political activists.

The third circuit (criminal / terrorism) renewd the detention of journalist, editor in chief of “Idaat” initiative, and the executive director of  “Rowat” platform, Ahmed Mohammad Abu Khalil, pending case No. 558 of 2020, supreme state security. Abu Khalil was arrested from his house in June 2020, and was subjected to enforced disappearance for 10 days, till the state security prosecution decided to hold him in pretrial detention with charges of joining a terrorist group and spreading false news.

In a related context, the detention of Islam Ali Muhammed was renewed by the council chamber of the criminal court for 45 days, pending case No. 1898 of 2019, supreme state security, as he was charged with joining a terrorist group, spreading false news, and misusing social media. It’s worth noting, this case includes defendants who were arrested in regard to the 20 September protests against President Al-Sisi.

AFTE submitted a request in cooperation with The defense team of human rights lawyer Muhammad Ramadan, to the supreme state security prosecution, demanding his hospitalization, taking the necessary medical procedures regarding his health condition, and releasing him pending case No. 467 of 2020. During last month, Ramadan complained of constant pain in the knees, to the point of his inability to sit or move normally.

Ramadan repeatedly requested access to a medical examination, so the prison officers decided to haze him, as he was transferred to another poorly ventilated ward. He has also been denied family visits for two months.

Notably, Ramadan has suffered from coronary artery insufficiency and high blood pressure, while being imprisoned in Borg Al-Arab Prison, after being arrested in September 2018. He was detained with charges pending a case known in the media as “the yellow jackets case”, similar to the ones that protests in France wore, pointing out to his support to the protesters.

After the Supreme State Security Prosecution had released him, he was detained again pending case No. 467 of 2020. This practice is known as recycling, which means charging the released defendants with new charges, in order to keep them in detention again.

In this regard, AFTE in addition to 8 other human rights organizations, issued a statement, calling for the provision of necessary health care for Ramadan, and releasing him while dropping all charges against him as a prisoner of conscience who was arrested for practicing his rights.

Releasing Islam Ahmed Samak under guarantee of his place of residence

The sowing of souls continues: Organizations condemning the execution of the death sentence against the monk Isaiah al-Maqari, ignoring requests for a pardon, and an investigation into his torture in order to make him confess