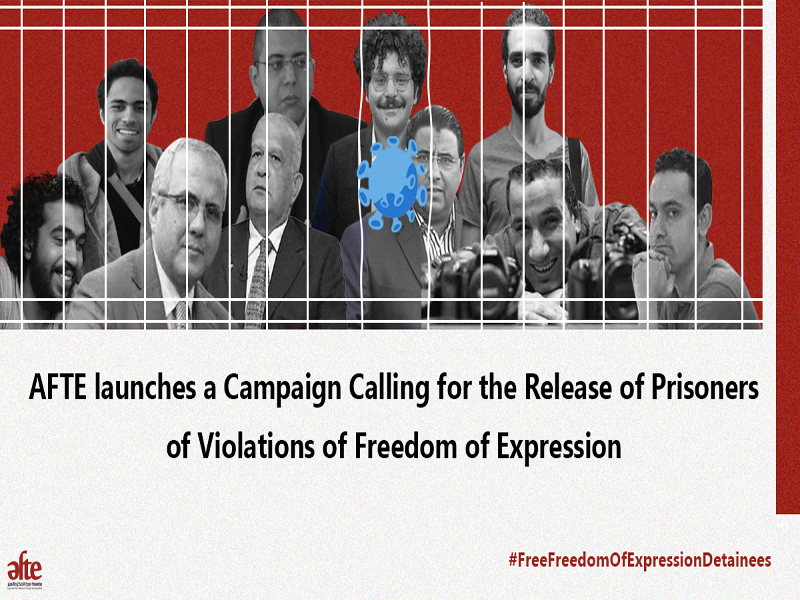 Concerns about conditions of prisoners and remand detainees increase, after the Ministry of Interior recently announced the death of a staff member in Tora Prison, at the end of last May, after it was confirmed that he was infected with Corona virus. This announcement caused panic among the prisoners’ families; for fear that their sons might be infected, especially in light of the decision preventing visits in prisons which was issued since the outbreak of Covid-19.

The Association for Freedom of Thought and Expression (AFTE) is launching a campaign to call for the release of prisoners of violations of freedom of expression under the slogan “Release prisoners of violations of freedom of expression”. This was a constant demand for human rights organizations and human rights defenders in Egypt; they raised and defended it in all forums and in all possible ways. However, at this moment this just demand has become a matter of life and death in the literal sense of the word, in light of the outbreak of Covid-19 epidemic in Egypt, and the increasing number of infected and dead people, according to official data issued by the Ministry of Health.

AFTE believes that the Ministry of Interior’s announcement that an employee in Tora prison died after it was proven that he was infected with Covid-19 calls for mobilizing efforts to release prisoners, especially prisoners of violations of freedom of expression. At a time when the epidemic is spreading everywhere, concern increases that prisoners in Egyptian prisons may be infected, especially that the Ministry of Interior did not declare transparently the measures it takes to prevent the spread of the epidemic. Moreover, stopping prisons’ visits and preventing prisoners from communicating with their families, raise the concerns of thousands of families over the well being of their sons and daughters and the risk of their infection, without being able to provide them with medical support.

The campaign AFTE launches today includes a list of prisoners of freedom of expression: journalists, creators, and academics. This list sheds light on their stories and cases, as these individuals are not just numbers; each of them has a story, worth telling, so that we know how each of them lost their freedom while exercising their right to freedom of expression. Likewise, the campaign includes a list of the 62 prisoners and individuals in remand detention, for whom AFTE provides legal aid.

AFTE republishes the text of the lawsuit it filed before the Administrative Court on behalf of Mahmoud Shehata, student at Cairo University, demanding that the Ministry of Interior, represented in the Prison Authority, allow Shehata’s family to provide him with health supplies and hygiene tools that contribute to the prevention of corona virus infection (Covid-19). The lawsuit also demanded that his family be informed of all information and preventive measures that the Prison Authority and the Ministry of Interior are taking to prevent the spread of Covid-19 virus infection within prisons and to enable Shehata to communicate with his family by any means, instead of the canceled weekly family visits.

The outbreak of the Covid-19 epidemic has prompted several countries around the world to release batches of prisoners, fearing an outbreak of the epidemic among them, including Algeria, Tunisia, Oman, Iran, Sudan and India. This is what the Egyptian authorities must do immediately.

AFTE sent a letter today to the National Council for Human Rights asking it to shoulder its responsibilities, to call on the Public Prosecution to release individuals in remand detention, especially those detained in freedom of expression cases, in addition to visiting a number of prisons.

AFTE calls on the Public Prosecution to release the 62 prisoners and remand detainees named in the list of defendants, for whom AFTE provides legal aid, especially since the accusations against them have no evidence, and are linked to the right to freedom of expression guaranteed in the Egyptian constitution. It also calls on the National Council for Human Rights to form delegations to inspect a sample of prisons and to find out the measures taken by the Ministry of Interior to protect prisoners from infection with Covid-19 virus, and to announce the results of these visits to the public opinion.