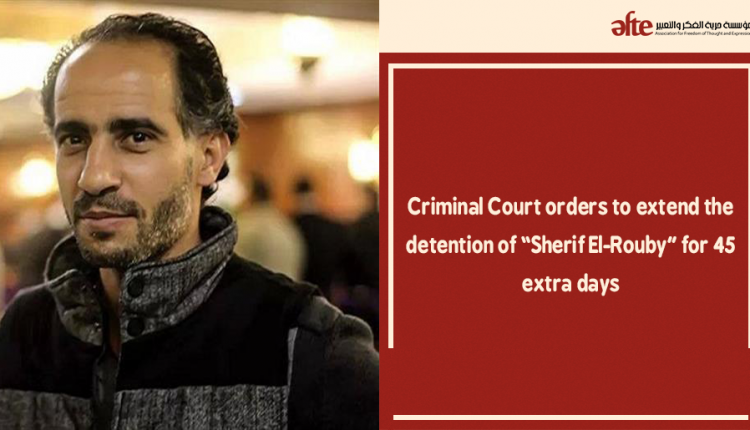 The Third Circuit of the Criminal Court considered the detention order of “Sherif El-Rouby”, and ordered to extend it for 45 extra days, this came pending Case No. 1111 of 2020 Supreme State Security. The session was held on Tuesday, September 7, 2021.

It’s noteworthy that “El-Rouby” was detained pending case No 621 of 2018, and Cairo criminal court decided to release him on July 22, 2019, after nearly a year and a half of pretrial detention, However, an arrest warrant against him was issued by the prosecution in last December, and he was investigated in the current case.

This practice is known as “rotating” and refers to re-detaining defendants after their release, usually with the same previous charges, or it may be a case that began during his pretrial detention, in order to keep political dissidents detained.

The third circuit (criminal/terrorism), had decided on Sunday’s hearing, May 23, 2021, to renew the detention of Sherif Ali Mohamed Ali, known as “Sherif El-Rouby”, for 45 Days Pending Investigations in Case No. 1111 of 2020 supreme state security, with charges of joining a terrorist group and spreading false news.

It’s noteworthy that “El-Rouby” was brought before the Prosecution last December, and was investigated without his lawyers, Also, he was detained pending case No 621 of 2018, and after a year and half of pretrial detention, Cairo criminal court decided to release him on July 22, 2019, However, a decision to arrest him was issued by the prosecution in December 2020 to be investigated in the current case.