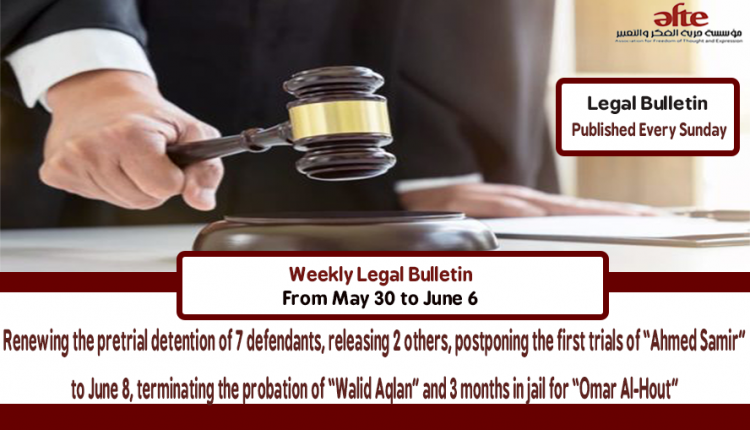 Renewing the pretrial detention of 7 defendants, releasing 2 others, postponing the first trials of “Ahmed Samir” to June 8, terminating the probation of “Walid Aqlan,” and 3 months in jail for “Omar Al-Hout”

May 30, 2021: The Third Circuit Terrorism renewed the detention of “Marwa Arafa” for 45 days pending Case No. 570 of 2020, Supreme State Security, where a six-man security force arrested her from her home in Nasr city at 11:30 pm on April 2020, and they confiscated her phone and sums in her possession, and she was detained in an unknown location for 14 days, till she appeared at the supreme state security prosecution on May 4, to be investigated pending the mentioned case.

In addition to renewing the pretrial detention of “Mostafa Mohamed Safwat,” 55 years old and works as a social worker, pending Case No.1017 of 2020, after he was arrested from his home on January 4, and was brought before the prosecution on January 9, 2021.

Also, The Council Chamber of the Criminal Court renewed the pretrial detention of both “Ayman Mahmoud Abdel-Halim” and “Kholoud Saied Amer” for 45 days pending Case No.1017 of 2020, it should be noted that both of defendants were recycled in this case, as “Ayman” was detained pending Case No. 12587 of 2018, and on December 12, 2020, a decision to release him was issued, after being kept in pretrial detention for more than two years, on December 17, 2020, during the implementation of his release procedures, he disappeared from Montaza 2 police station, and was detained unlawfully and in a place unknown to his family for about 29 days, till he was recycled in the current case.

While “Kholoud” head of the translation department in the publishing sector at the Bibliotheca Alexandrina, was detained pending case No. 558 of 2020, and after 28 days of releasing her with precautionary measures, she appeared before the supreme state security prosecution to be investigated in the new case with the same old charges.

Furthermore, on Monday’s May 31, 2021, session, The council chamber of the criminal court renewed the detention of lawyer “Amr Nohan” for 45 days pending case No. 741 of 2019, he was arrested in 2019, from Karmus police station while providing legal aid and appeared 3 days after before the prosecution, and in few days “Nohan” will complete 2 years in detention.

And in Zagazig, Zagazig Criminal Court renewed the detention of the Quranist blogger “Reda Abdel-Rahman”, for 45 days pending Case No. 3418 of 2020, he arrested on August 21, 2020, from his house, after the issuance of an arrest warrant, based on the National Security’s investigations, and his phone was confiscated, and was disappeared for over a month, “Reda” proved in the investigation report that he was detained throughout his disappearance at Kafr Saqr police station, before he was brought before the prosecution on October,  AFTE published a report entitled “Forbidden Belief: Report on the Imprisonment of Quranist Blogger Reda Abdel-Rahman” and urged the Public Prosecutor, to release him and close the case.

June 1, 2021: The first circuit terrorism, decided to accept the writ of “Walid Mohamed Hamid Aqlan”, and to suspend the police probation that was imposed on him, pending case No. 5976 of 2013, the New Felonies of Heliopolis, known as “El-Ethadia events”, the public prosecution had imposed the police probation sentence on the defendant as a complementary penalty after he had served the period that the court had sentenced him to 3 years in prison, and the court’s decision came yesterday after he had spent nearly a year and a half in probation, Notably AFTE had filed last April, a lawsuit No. 44623 of 75, before the Administrative Court / the First Circuit, on behalf of the defendant, to appeal the provision of the administration authority to refrain from designating his residence as a place of probation, instead of designating the Bulaq Dakrour police station as a place of probation.

And on June 2, 2021’s session, The council chamber of Cairo criminal court decided to release “Mohamed Abdel-Moneim Abdullatif” with precautionary measures pending Case No.1898 of 2019 supreme state security, after being detained for a year and a half.

And on June 5, 2021’s session, Cairo criminal court decided to terminate the precautionary measures and release defendant “Ahmed Saied Meligy Zekr Allah” pending Case No. 10212 of 2017 Dokki misdemeanor, who was arrested on the background of spreading posters bearing the signature of “gerbils union” in public, after being detained for nearly a year and a half.

June 1, 2021: after the supreme state security prosecution referred researcher Ahmed Samir Santawy to a speedy trial, Supreme state security court held at the new Cairo court in the Fifth Settlement, decided to postpone the first session of the trial of researcher Ahmed Samir Santawy pending Case No. 877 of 2021, in which he was investigated on May 22, to June 8 session instead of June 1 as was planned.

The court gave permission to his lawyers to view and obtain official copies of the case files, while the researcher continued to be imprisoned, it should be noted that Santawy is still detained pending another Case No. 65 of 2021 supreme state security since last February, AFTE in addition to 9 Egyptian human rights organizations issued a statement to condemn Referring researcher Ahmed Samir Santawy to the Emergency Supreme State Security Court and demand his unconditional release.

In a similar context, the supreme state security prosecution decided to detain doctor “Hossam Elden Shaaban” (30 years) for 15 Days Pending Case No. 910 of 2021 supreme state security. He is one of the doctors assigned to Rafah Hospital to receive the war injured from Palestine, on the background of tweeting on his “Twitter” account, to record the details of his journey from Cairo to the Egyptian city of Rafah, He was arrested from Al-Arish Hospital since May 15, and was held unlawfully until he appeared before the State Security Prosecution.