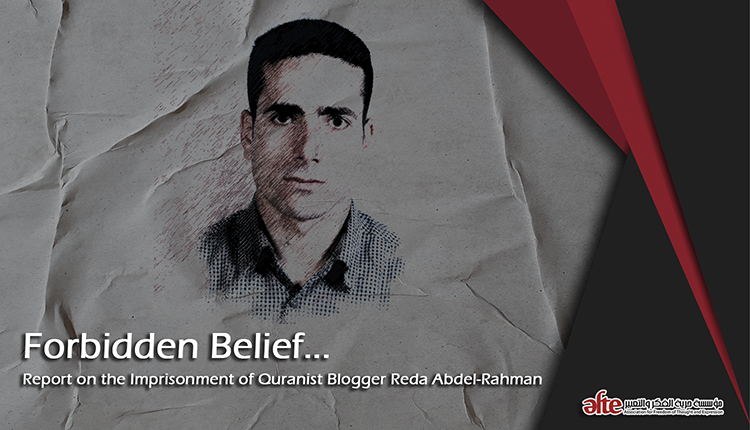 Written and edited by the Research Unit of AFTE

Material collected with the help of AFTE’s Legal Aid Unit

This report relied on several human rights and media reports published on the violations that were inflicted upon the Quranist Blogger Reda Abdel-Rahman over the past twelve years, in addition to information documented by AFTE in an interview conducted with one of his friends. The report also relied on testimony written by one of the relatives of Reda Abdel-Rahman, as well as the papers of investigations made with Abdel-Rahman which AFTE’s lawyer in Sharqia Governorate obtained.

The case of Quranist Blogger Reda Abdel-Rahman raises many questions about the consequences of citizens’ expression of belief or religion. Belonging to the religion of the majority of citizens of the state does not mean freedom from violation. This applies to the case of the family of Dr. Ahmed Sobdy Mansour who was teaching history in Al-Azhar University. Targeting by security forces led Mansour to a compulsory exile, and caused harm to his family in a series of violations the latest of which is what happened to his relative Reda Abdel-Rahman who is a teacher and blogger.

Abdel-Rahman has been subjected to a series of violations that started with harassment at his workplace, included arrest and arbitrary detention, and ended with pressing baseless accusations against him. All this happened to him because he expressed his religious beliefs and his belonging to the Quranist school of thought that does not fit with the formal conception of Islam adopted by the institutions of the state.

On the 22nd of August 2020, ten members of the family of Ahmed Sobhy Mansour were arrested. All of them were released later except Reda Abdel-Rahman who is a teacher in an Azhar Institute. Abdel-Rahman was arrested pursuant to Emergency Law in 2008, and then detained in 2016. After his release, he stopped writing or posting.[1]

State institutions started targeting this family when University Professor Ahmed Sobhy Mansour was still teaching history in Al-Azhar University. Ahmed Sobhy Mansour was arrested for two months in 1987 and was suspended from work because he had beliefs that are different from the dominant principles of the institution of Al-Azhar.[2] Security forces continued targeting this Azhar professor and his family to the extent that they arrested his son Shereif, when he was 17, and unlawfully interrogated him in the premises of state security apparatus in Lazoughly.[3] Harassments were supposed to stop when Sobhy Mansour decided to migrate to the United States in 2000, and obtained political asylum. However, state security officers continued targeting his relatives in Egypt.[4]

Sobhy Mansour insists that he has the right to believe in and belong to the Quranist School. In response, security forces continued prosecuting his relatives in Egypt. This also happened with his relative Reda Abdel-Rahman who has the same beliefs. In spite of releasing the rest of his relatives without pressing formal charges against them, Reda Abdel-Rahman forcibly disappeared for more than 40 days and he was charged with accusations related to terrorism.

Former president Anwar Al-Sadat decided to bestow a religious aura on the modern Egyptian state. He adopted Islamic Sharia as “a principal” source for legislation in the Constitution of 1971. In 2012, the Constituent Assembly added article 219 which stated that “the principles of Islamic Sharia include its general evidence, foundational rules, rules of jurisprudence, and credible sources accepted in the schools of the people of Sunnah and the community.” This addition reflected the hegemony of political Islamist currents. It was soon removed from the Constitution of Egypt with the amendments made by the Commission of Fifty in 2014 following the removal of Islamists from power in Egypt. The Constitution of Egypt guarantees freedom of belief as an absolute freedom in article 64.

There are different religious minorities in Egypt including Christians of different sects, the Jewish community, and the Baha’is who didn’t receive official recognition from the state until now. Within Islam, there are unrecognized minorities including Shiites and Quranists whose right to freedom of belief is violated, and who are prosecuted by security forces. Among state officials themselves, we see the President of the Republic and the Sheikh of Al-Azhar – the head of the formal Islamic institution – publicly disagree on the interpretation or explanation of a number of religious matters.[5]

The case of targeting Professor Ahmed Sobhy Mansour, and continuous security prosecution of his family members since mid-1980s, is a flagrant example of the deprivation of Muslim minorities from the right to free expression of religion and belief in a state whose official religion is Islam according to the Constitution. In the following sections, the report details violations and harassments by security forces to this family based on documented testimonies with some of its members.

The wife of Reda Abdel-Rahman didn’t receive any reply to the messages she sent to the President and Prime Minister demanding the disclosure of the whereabouts of her husband and his brother as security forces denied their presence after arresting them on midnight of 22 August 2020. The wife affirmed in her message that she fears that false accusations would be fabricated against her husband or that he would be implicated in cases he has nothing to do with. In October 2020, Abdel-Rahman appeared before State Security Prosecution for investigations in case no. 3418 for 2020 Kafr Saqr Misdemeanours State Security Prosecution.

Reda Abdel-Rahman was born in 1976. He lives in the village of Abou Hreez, Kafr Saqr district, Sharqia Governorate. He graduated from the Faculty of Education of Al-Azhar University.

Abdel-Rahman apparently enjoys all privileges that should have made him evade any kind of prosecution or targeting. He is a married Muslim man with a clean criminal record. However, Abdel-Rahman has been subjected during 12 years for prosecution at the hands of state security apparatus officers.

In 2008, Reda was 32 years old. He regularly went to work in an Azhar Institute in Sharqia Governorate. He had a blog on the internet called (Justice… Freedom… Equality…). Because of this blog, the state security apparatus directly harassed him for the first time. On the 27th of October 2008, Abdel-Rahman was arrested after his house was raided and searched. He remained arrested for 88 days based on Emergency Law which allowed administrative detention at the time. No specific accusations were made against Abdel-Rahman.

This arrest was preceded by a summons that Reda Abdel-Rahman wrote about it in his blog. Before he was arrested, the Legal Affairs Department of the Office of the Sheikh of Al-Azhar performed an investigation on the articles he published on the internet. This investigation ended in a clear threat to him, and he was forced to write an avowal “not to publish any articles on the internet or any religious writings.”[6]

Reda Abdel-Rahman was interrogated at least twice in that period of 2008 in the premises of the State Security Apparatus in Kafr Saqr, Sharqeya governorate. Most questions were related to his religious beliefs as a “Quranist” who believes that Quran is the only source of the rulings of Islam. The officer asked him if he believes in the Prophet’s traditions (Sunnah), if he prays or not, and how he prays.[7] Abdel-Rahman was forced to give them the password of his email. He was deprived of food for two full days. Then, he was detained in solitary confinement in Tora Reception Prison without being allowed to communicate with his family or being visited by them.[8]

On the 14th of December 2008, a court decided to end the arrest of Reda Abdel-Rahman. However, the Ministry of Manpower appealed the decision trying to keep him under open-ending arrest without trial. On the 6th of January 2009, State Security Emergency Court dismissed this appeal and issued a final ruling ordering his release.[9] Two days later, State Security Prosecution repeated investigations with Reda on charges of contempt of religion and asked him again about his beliefs and opinions in several religious matters. Then, it ordered his release. However, the Ministry of Interior didn’t execute the final ruling of the Court and the order of State Security Prosecution to release Abdel-Rahman. He remained in custody for 14 days before he was released.

Reda Abdel-Rahman was arrested again in 2016. State Security officers did not only ask him about his beliefs and opinions. They also ordered him to stop any writings or activities related to expressing his religious belief, and to terminate his relationship with his uncle Dr. Ahmed Sobhy Mansour.[10]

Reda Abdel-Rahman was arrested for the third time in August 2020. Just like previous times, state security officers discussed his beliefs and personal relations. However, it was different this time as they submitted an inquiry report to State Security Prosecution accusing Abdel-Rahman of committing crimes related to terrorism. Although Abdel-Rahman was arrested on the 22nd of August 2020 and his wife tried to prove that he forcibly disappeared, the Public Prosecution didn’t decide on the allegations made by his wife.

All dates related to the case, starting from the inquiry report, were subsequent to the date of arresting Abdel-Rahman by more than forty days. This challenges the validity of all documents and formal procedures made by the Ministry of Interior and Supreme State Security Prosecution, as follows:

Reda Abdel-Rahman denied all charges against him. He confirmed that he actually was arrested on the 22nd of August 2020 from his house. He stated that the police force that arrested him, including a police man he knows, didn’t search his house but only seized his mobile phone. Abdel-Rahman stated in the investigation report that he was detained throughout the period of his disappearance in the Police Department of Kafr Saqr. However, the Prosecution decided to put him in remand detention pending further investigations although the police investigations report was obscure and imprecise in comparison to the arrest report.

In this report, AFTE recorded violations against Quranist Blogger Reda Abdel-Rahman, the latest of which is his remand detention pending further investigations based on unserious accusations without evidence. Institutions responsible for arrest and investigation and the Public Prosecution use remand detention as a punishment against Abdel-Rahmn in order to prevent him from expressing his beliefs. So, AFTE calls upon the Public Prosecutor, Hamada El-Sawy, to: