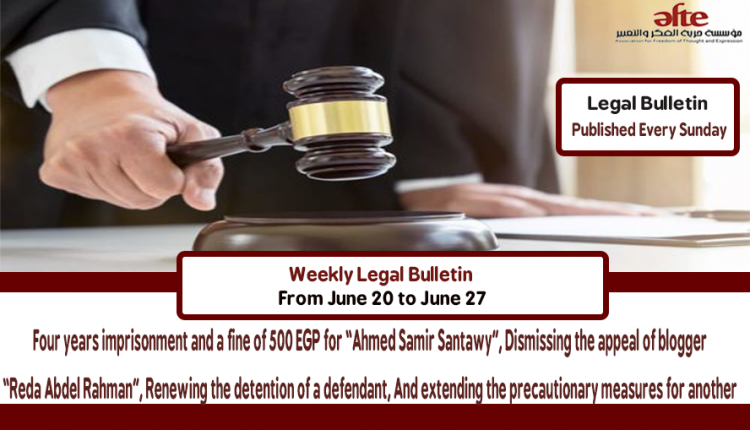 Four years imprisonment and a fine of 500 EGP for “Ahmed Samir Santawy”, Dismissing the appeal of blogger “Reda Abdel Rahman”, Renewing the detention of a defendant, And extending the precautionary measures for another

June 22, 2021: The Council Chamber of the Criminal Court renewed the pretrial detention of the defendant “Ahmed Hassanein Mohamed Moussa” for 45 days pending Case No. 1475 of 2019 Supreme State Security, in which he’s charged with joining a terrorist group, committing a financing offense, spreading false news and statements, and misusing a social media website.

While it decided to extend the precautionary measures of the defendant “Ahmed Mohamed Ali” for 45 days pending Case No. 1956 of 2019 Supreme State Security, The Council Chamber of the Criminal Court had decided to release him on last May 11.

And in Zagazig, The First Circuit dismissed the appeal of the Quranist blogger “Reda Abdel-Rahman Ali”, and upheld his detention order for 45 days pending Case No. 3418 of 2020, State Security Emergency Misdemeanour,  he was arrested on last August 22, after an arrest warrant was issued based on the National Security investigations, and his phone was confiscated by the security forces, after that he disappeared for over a month, “Reda” proved in the investigation report that he was detained throughout his disappearance period at Kafr Saqr police station, before he was brought before the prosecution on October of the same year,  AFTE issued a report on the violations he suffered for 12 years,  entitled “Forbidden Belief: Report on the Imprisonment of Quranist Blogger Reda Abdel-Rahman” and urged the Public Prosecutor, to release him and close the investigations.

The sentence was issued only a month after the investigation pending the mentioned-above case had begun; The Supreme State Security Prosecution interrogated him on May 22, 2021, with technical reports about a Social Media “Facebook” account allegedly attributed to him, “Santawy” denied any connection to the account, in the same context his defense counsel requested that “Santawy” to be referred to a forensic medical examination; in order to corroborate the incident of the deputy warden’s of Liman Tura physical assault to him, yet the prosecution, for the second time, ignored the defense’s requests and the deputy warden was not investigated concerning what was attributed to him.

It is worth noting that this sentence is final and cannot be appealed under the emergency law, and “Santawy” is still detained pending another case, Case 65 of 2021 Supreme State Security since last February.

AFTE, in addition to 10 other human rights organizations, issued a statement condemning the exceptional sentence against “Santawy”.