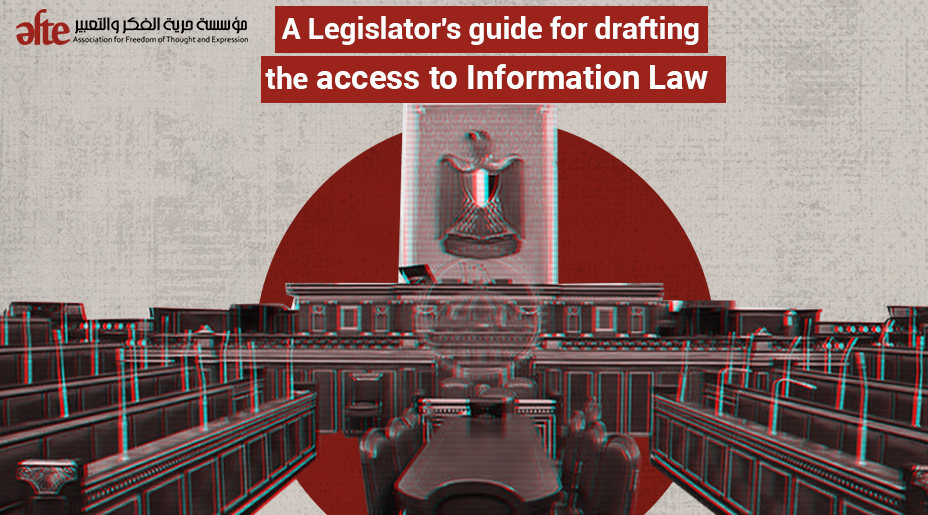 First: The importance of the Access to Information Law

Second: A timeline for attempts to issue the law in Egypt

Third: Basic principles of legislation related to the circulation of information

The Association for Freedom of Thought and Expression (AFTE) presents this guide regarding the Information Circulation Law to Egyptian legislators, in hope that it will help expand the legislator’s grasp of matters related to drafting the Information Circulation Law. This law is a constitutional entitlement, as amendments to the constitution in 2014 approved its issuance in accordance with Article (68). In addition, the Egyptian government included the issuance of the law in its National Human Rights Strategy (2021-2026).

For decades, legislative approaches were not supportive of freedom of and information. Despite this, AFTE continues to work with various parties, including legislators, to try to implement appropriate legislative reforms in order to protect freedom of expression as well as the free circulation of information.

In this guide, we provide the legislator with a brief presentation on the significance of the Information Circulation Law. It is customary to associate this law with freedom of the press only, but in fact its weight extends to all fields, greatly affecting the stimulation of political participation and development.

The guide presents a timeline of over 10 years of attempts to issue this law. These attempts reflect efforts of ministries and government agencies to prepare drafts of the law, which end up being stocked in the government’s drawers. Civil society also submitted a draft law on the circulation of information in 2012, based on which a committee from the Media Council drew up its draft law in 2017.

The guide ends with a review of the basic principles that are required to be available in legislations related to the circulation of information, which are principles prepared by ARTICLE 19, a leading international organization that defends and promotes freedom of information. These principles were first issued in 1999, and updated in 2015. It is worth noting that these principles were adopted by the United Nations Commission on Human Rights’ Special Rapporteur on Freedom of Opinion and Expression in its report to the 2000th session.

First: The importance of the Access to Information Law

The right to knowledge and the circulation of information is linked to democratic systems, as public institutions serve citizens, who naturally have the right to know information that helps them participate in public affairs as well as to hold these institutions accountable. Here, information is not owned by the government as long as there is no public interest in keeping it classified. On the other hand, the right to circulate information is an essential ingredient of development, as it fosters a suitable climate for investment, through promoting human resources and addressing social and economic problems, which can only be done within an open framework of access to information and its circulation, otherwise public institutions will fall into corruption and inefficient management.

In Egypt, the government makes great efforts to deny rumors related to its work, while the security services refer hundreds of citizens to the Public Prosecution on charges of spreading false news. All of this raises questions with regard to how a citizen can distinguish the validity of widespread information if the competent authorities are not committed to transparency and disclosure of information. Thus, the Information Circulation Law is of great importance in maintaining political stability.

The Information Circulation Law would help in understanding developments related to projects of development and establishing new cities, as well as the associated agreements with governments and major companies. Especially due to the current absence of information, concerns about the feasibility of these projects and agreements add up and increase. As a result, public opinion cannot rely on general governmental estimates, but rather official information, subject to discussion and analysis.

Concerns are growing, given that sessions by the parliament are kept from the public and not being broadcasted. We address this guide to legislators in both chambers; the House of Senates and the House of Representatives, confirming that parliaments are public bodies, whose work must be made available to the public, whether in terms of the legislation they discuss or the accountability of the government.

Second: A timeline of attempts to issue the Law in Egypt

In the aftermath of the January 25 revolution, Egypt witnessed several attempts to prepare the Information Circulation Law, as follows: 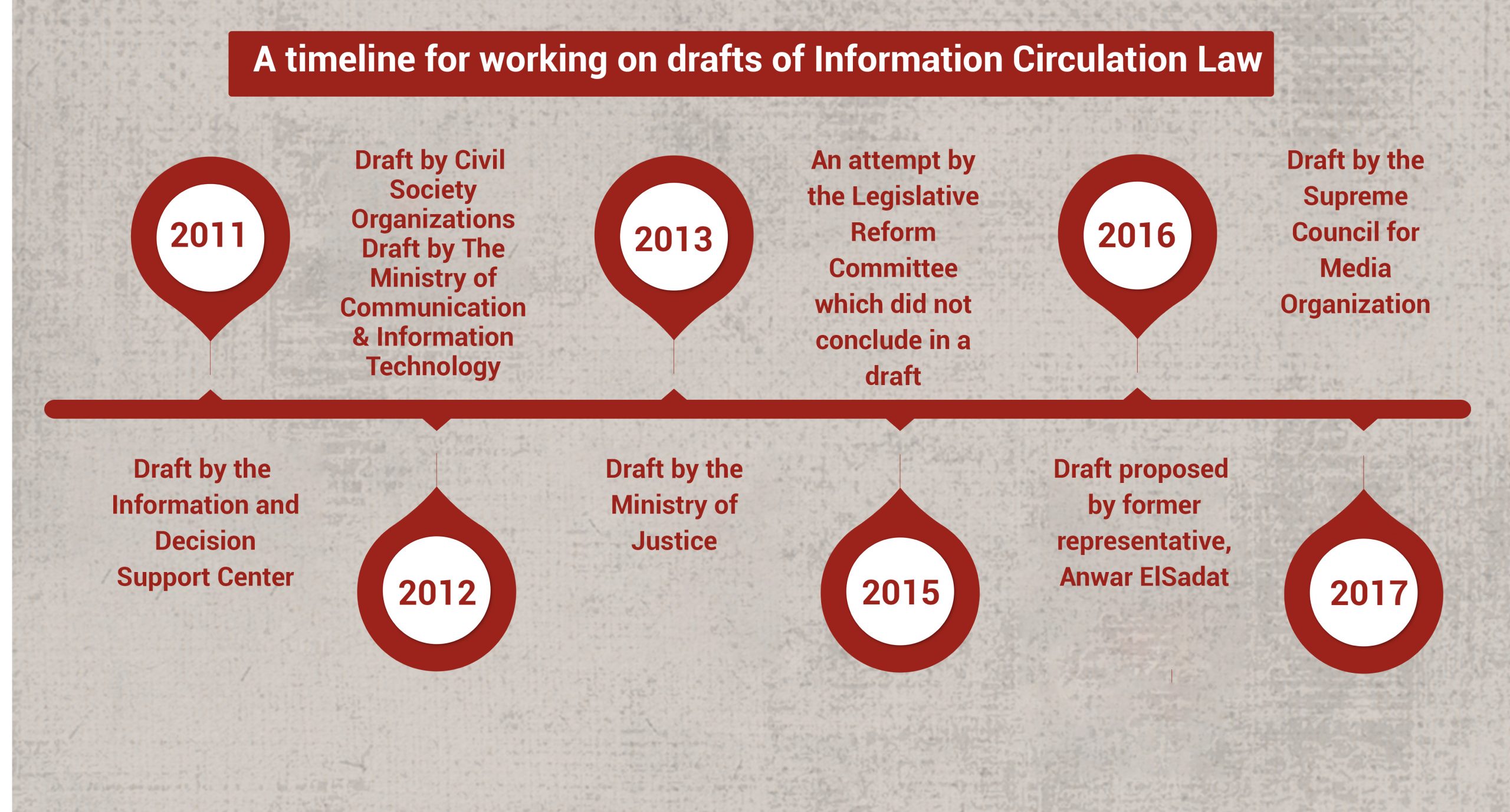 In September 2021, President Sisi launched the National Human Rights Strategy, which touched upon “Freedom of Expression” and tackled passing the law regulating the right to obtain and circulate information, data and official statistics.

Third: Basic principles of legislation related to the circulation of information 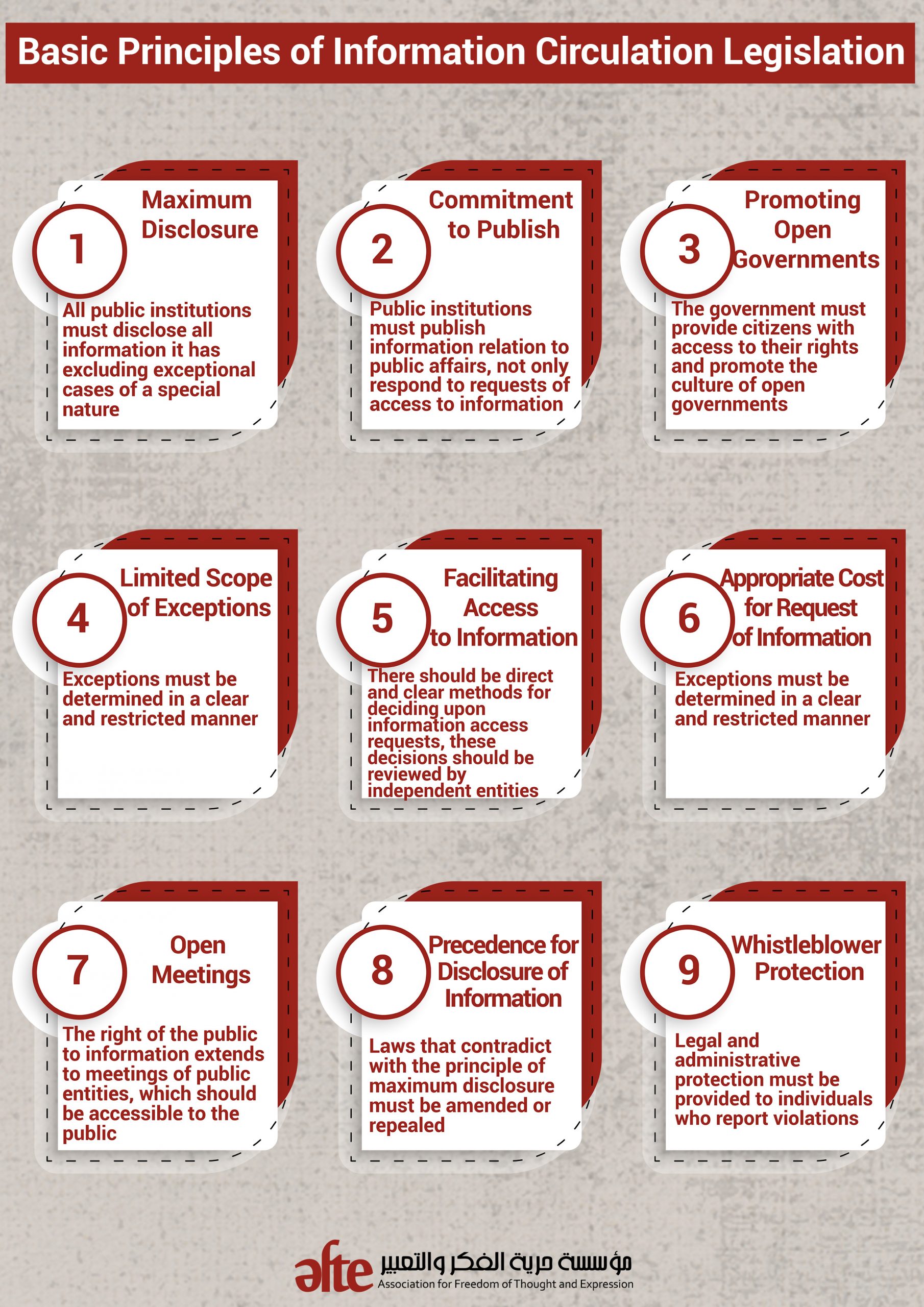 This principle stems from the fact that public authorities and institutions must disclose all information they have, excluding exceptional cases, as clarified by the fourth principle. All individuals and organizations have the right to obtain information, without being restricted by nationality or place of residence. The right should not be restricted by requiring a statement of the reasons that prompt individuals or organizations to request information.

Information in this sense, is all information held by a public entity, regardless of the manner in which it is kept, source or date of production, and the right to obtain information must include records in which it is documented, to enable citizens to know the context associated with it.

The public authority means all branches and levels of government, including elected councils such as parliament, municipalities, bodies operating under official mandates, state-owned industries, judicial bodies, and private bodies that assume public responsibilities. Security and sovereign bodies should not be exempted from being scrutinized by the Information Circulation Law. Public authorities must be committed to maintaining, preserving and protecting information from damage or prejudice.

The right to information does not end at submitting requests for access to public bodies, but these bodies must proactively publish information of public interest, in accordance with their available resources. At a minimum, public entities should disclose their operational information, including their objectives, structure, and general policies, information related to complaints and requests, and guidelines that enable the public to make suggestions.

Public authorities are also obligated to indicate the types of information they hold and the manner in which this information is kept. They are also required to clarify the reference material for the policy or action taken, especially in the case of assessments of environmental, social and human rights impacts. This information shall be used without restrictions.

The public must be informed of their rights and a culture of openness in the government must be promoted, if the employees in public bodies are not committed to this, it shall undermine the impact of the Information Circulation Law. In this, the law must include provisions for allocating sufficient resources for its promotion. The use of audio and visual tools in countries where literacy rates are low is essential. The government and all public bodies must be committed to confronting the culture of secrecy and provide the necessary training for its employees to implement the law.

Public authorities can reject requests of access to information provided that the rejection falls within the scope of exceptions, by proving that the information meets the requirements of the strict triple standards, in terms of:

The legitimate purpose must be defined in law and restricted to matters recognized by international law such as law enforcement, privacy, national security, trade secrets, public and individual safety, and the integrity of governmental decision-making processes. In the event that it is proven that the disclosure of information causes harm within the scope of a legitimate purpose, it must be investigated whether the disclosure of information leads to an interest greater than this harm.

All public agencies are obligated to establish open and accessible internal systems and assign an official to decide upon the requests submitted to them, also sufficient financial resources should be allocated to ensure the propriety of the access method, such as in the case of groups who cannot read and write or who do not know the language in which the information is written or people with disabilities. The procedures for obtaining information must include several scales, the first of which is in the public authority itself. If the request is rejected, one can resort to an independent administrative body, and in the case of a second rejection, one can resort to the judiciary.

All of these procedures should be as immediate and cost-effective as possible, so as not to impede individuals from obtaining their right to knowledge.

Appropriate Cost for Request of Information

Public agencies should provide information at no cost, and if they are unable to do so, they should ensure that it is a low cost. In the event that the requests are personal or serve the public interest, such as requests of re-publication, the public authorities must eliminate or reduce costs.

The public’s right to information extends to attending meetings of public bodies and participating in decision-making. In this context, the meeting can be an official session of a public body for the purpose of carrying out public works. Among the factors that indicate whether it is an official meeting are the requirements for quorum attendance and the application of the official procedural rules of the meeting.

Precedence for Disclosure of Information

Employees should be protected from penalties if they disclose restricted information in good faith.

The law must guarantee the protection of individuals from any legal or administrative penalties or damages resulting from disclosing violations, whether in public or private bodies. Criminal, civil, administrative and labor laws must be consistent with that.

Violations mean any criminal offenses, non-compliance with the law, corruption or mismanagement, in relation to any public entity. The same applies to serious threats to health, safety or the environment.

AFTE expects this guide to contribute to raising the awareness of parliamentarians of the most important standards that must be met with regards to information circulation law, whilst hoping that the Access to Information Law will be adopted in Egypt in 2022.

Egypt: Retrial demanded for detainees allegedly tortured by police and sentenced by terrorism court for up to life imprisonment