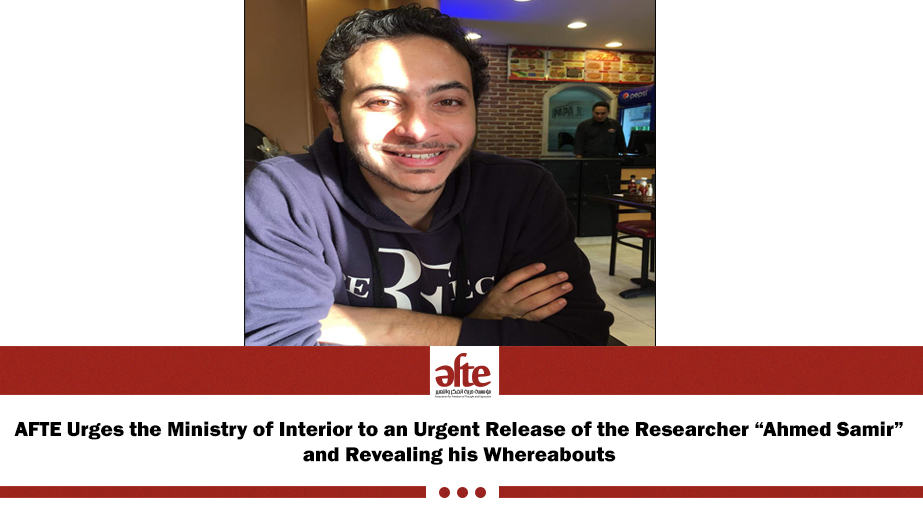 The Association for Freedom of Thought and Expression (AFTE) calls on the Ministry of Interior of Egypt to release Ahmed Samir Santawy, the researcher who has been arbitrarily detained after voluntarily going to the police station in the Fifth Settlement district in Cairo on the 1st of February 2021 upon an earlier request from police officials to attend there. There was no possibility for Samir’s lawyer to attend and provide him with legal assistance while in police custody, and all communication with Samir was cut off since then. AFTE reiterates its demand to the Egyptian security forces to stop the pattern of intimidation and arrests faced by researchers, violating their rights and disrupting their studies.

Ahmed Samir Sintawi, 29 years old, anthropology and social sciences master’s student at the Central European University (CEU) in Austria since September 2019, has returned to Egypt on a study holiday to visit his family.

On January 23, 2021, Samir’s family was surprised by a force from the National Security storming their house located in the First Settlement, the force searched the house and confiscated the DVR of the house’s surveillance cameras. At that time, as Samir was on a trip in Dahab, South Sinai, the force informed his family that he should attend to the police station once he arrives. Indeed, Samir arrived last Saturday, January 30th, 2021, and went to the police station, where he was instructed to come back on Monday, February 1st, 2021. He returned to the police station this Monday, and has disappeared since then.

The researcher’s family sent a telegram to the Attorney General demanding his release, in an attempt to restore his safety and know his fate after communication with him has been cut off for above 72 hours.

Samir’s arrest is an instance of a systematic pattern of harassment and intimidation by the Egyptian authorities targeting researchers and scientific research. In this context, Patrick George Zaki, an enrolled master’s student at the University of Bologna in Italy, has completed this month a year in pretrial detention, after he was arrested at Cairo International Airport in February 2020 on his return to visit Egypt while on vacation. This was preceded by the arrest of the PhD researcher at the University of Washington, Walid Salem, on March 23rd, 2018 after meeting a university professor as part of his work on his doctoral research. Salem was released pending the case on December 11th, 2018, but his passport was withdrawn and he was banned from travelling. Until now, Salem is not yet able to complete his studies and return to his family outside of Egypt.

This pattern of arbitrary arrests and detentions and enforced disappearances towards researchers also recalls the enforced disappearance of the University of Cambridge’s Italian researcher Giulio Regeni, in January 2016. Regeni was a visitor student at the American University in Cairo to work on his PhD thesis on Egypt’s independent labor unions. Regeni’s body was later found with dead with signs of torture. This incident caused further deterioration in the freedom of scientific research in Egypt and increased the fears of many international universities to cooperate with Egyptian universities, or to send their researchers to Egypt.

AFTE renews its demand for the Egyptian authorities to immediately stop the wave of researchers’ arrests and shrinking the space for academia, as this poses a threat to the freedom of scientific research in Egypt, intimidates researchers, and affects the reputation and status of Egyptian universities in the international community. It also forces researchers and university professors to flee for fear of returning to Egypt in an attempt to protect their freedom.

Accordingly, AFTE calls on security forces and the Public Prosecution to speed up the release of researchers Ahmed Samir and Patrick George, as well as to allow the researcher Walid Salem to travel and resume his PhD studies, and to guarantee the non-repetition of such violations.