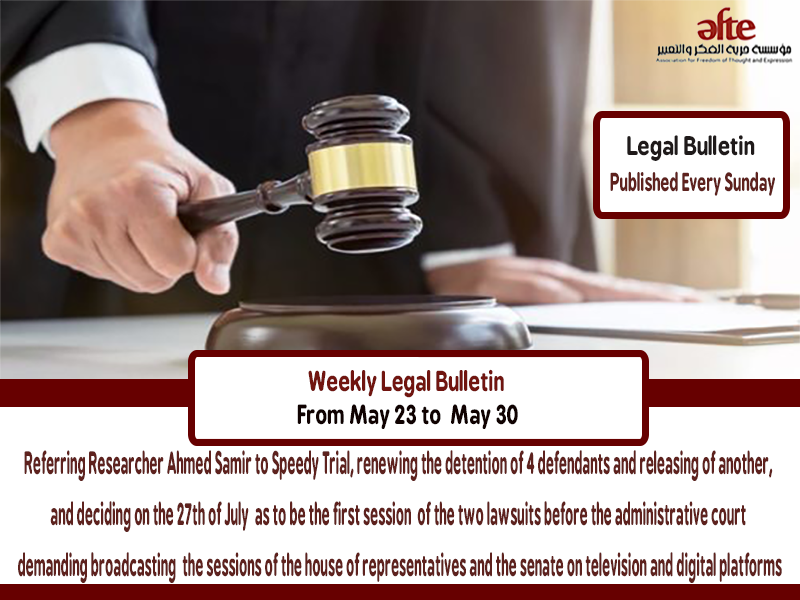 Referring Researcher Ahmed Samir to Speedy Trial, renewing the detention of 4 defendants and releasing of another, and deciding on the 27th of July as to be the first session of the two lawsuits before the administrative court demanding broadcasting the sessions of the house of representatives and the senate on television and digital platforms

May 23, 2021: The third circuit terrorism renewed the pretrial detention of vice president of the “Strong Egypt” political party, Mohamed Ali Ibrahim Al-Qassas” for 45 days pending investigations in case No. 786 of 2020, Supreme State Security.

Notably, that this is Al-Qassas’s third case, as security forces arrested him in February 2017, from Salah Salem road while he was heading to attend a wedding, and was kept in solitary confinement, at Tura’s max security prison known as “Scorpion Prison”, pending case No. 977 of 2017, known in media as “Mekamleen 2”, he was prevented from visits, sports, books, and medications, and after being detained for 2 years, which is the maximum period of pretrial detention according to the law, the attorney general issued a decision to release him, only after 3 days he was detained again pending the second case No. 1781 of 2019 supreme state security, and after 7 months of pretrial detention, the criminal court decided to replace his detention with precautionary measures, the decision wasn’t implemented either. After 3 days, he was recycled in a new case with the same old charges, although he was kept in solitary confinement.

Al-Qassas is charged with spreading false news, misusing social media platforms, joining a terrorist group and promoting its aims, and was added to the travel ban list.

In a similar context, The third circuit (criminal/terrorism) renewed the detention of activist Sherif Ali Mohamed Ali, known as “Sherif El-Rouby”, for 45 days pending investigations into case No. 1111 of 2020 supreme state security.

El-Rouby was arrested based on a decision from the prosecution to arrest and bring him, he was taken to an unknown destination, but he appeared before the prosecution days after his arrest on last December 9, was investigated without his lawyers, and this is his second case, as was arrested on April 6, 2018 in the governorate of Alexandria, and after 8 days of enforced disappearance, he was brought before the Supreme State Security Prosecution on April 16 for investigations pending case No. 621 of 2018 supreme state security, and after nearly a year and a half of pretrial detention, Cairo Criminal Court decided to release him on July 22, 2019.

May 25, 2021: The council chamber of the criminal court renewed the detention of lawyer, human rights defender, 2014 winner of Ludovic Trarieux, Mahienour Mohamed Abdel-Salam El-Massry, for 45 days pending investigation into case No. 488 of 2019.

She was arrested in September 2019 by kidnapping her in a microbus in front of the State Security Prosecution, while providing legal aid as a human rights lawyer attending with activists accused of demonstrating in the events of September 20, and also, she was recycled in a new case No. 855 of 2020 during her imprisonment and on the same previous charges.

And pending the same case, The third circuit (criminal/terrorism) renewed the detention of  “Esraa Abdel Fattah” for 45 days, the Egyptian security forces had arrested the activist in October 2019, as the security forces led a campaign of arrests against many political activists after the September 2019 demonstrations, despite her distance from public work and political blogging.

May 26, 2021: The Administrative Court (second circuit) scheduled the upcoming July 27 session, as the first session of the emergency motion in the two lawsuits filed by AFTE’s lawyers, against both speakers of the House of Representatives and the Senate, challenging the negative decision not to broadcast the parliamentary sessions on television and digital platforms or to publish them in writing in the Official Gazette, the first case, filed against the speaker of the House of Representatives, carried No. 46322 of 75, while the second, filed against the speaker of the Senate, carried No. 46319 of 75, before the second circuit of the administrative court.
The former speaker of the house of representatives Ali Abdel-Aal, had decided since 11 January 2016 to cancel the live broadcast of the parliamentary sessions, and AFTE issued a paper on the importance of broadcasting parliamentary sessions, after the first meeting of the newly-elected House of Representatives in January 2021.