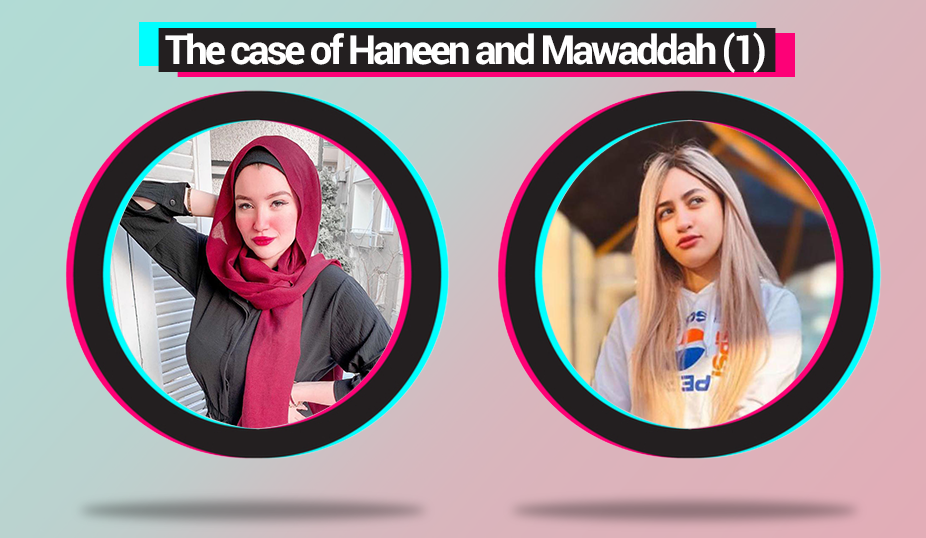 The case of Haneen and Mawaddah (1)

In April 2020, the Public Prosecution issued an arrest warrant against Hanin Hossam, accusing her of infringing on family principles and values of the Egyptian society, in addition to creating, managing and using private websites and accounts through social media applications with the aim of committing that crime.

In addition, there were charges of human trafficking, through recruiting two girls, one of them a minor, and using them in actions contrary to the principles and values of the Egyptian society, to obtain material benefits from them, while taking advantage of their poverty; through promising to give them money, all which a human trafficking organization is responsible for, that includes the defendants and others.

As a result, the Public Prosecution launched two lawsuits, the first with charges relating to the Information Technology Law and the Penal Code, accusing them of infringing on family values, to be considered by the Economic Court, while the second lawsuit was to be considered according to the Human Trafficking Law, the Child Law, and the Penal Code, before the Criminal Court.

The Public Prosecution did not move the case against Hanin Hossam according to an official report by a specific person, as usual. However, it took action after it observed “widespread interaction from social media participants on her official Facebook account” and received several demands to investigate the aforementioned suspect.[1] The most prominent demands to “investigate” Hanin were non-official complaints made by male content creators through their own channels[2].

On the other hand, Nashat Al-Daihi, member of the Supreme Council for Media, proceeded to address the official authorities, including the Egyptian Public Prosecution, to deal with Haneen Hossam, after he accused her of a several charges, that including “slave trade, pimping, legalized prostitution, and advocacy for immorality.” in an episode on his television program.[3]

Two days after Al-Daihi pointed the “moral catastrophe” taking place on social media, the security services arrested Hanin Hossam, then the Public Prosecution announced this in an official statement, using the same terms used by the “informants”, which can be considered closer to conviction and stigmatization, especially since that happened before a court ruling convicted her. On May 14, 2020, Mawaddah Al-Adham was also arrested to be charged in the same case with Hanin.[4]

The Egyptian Public Prosecution issued its first detailed statement regarding the case on April 23, 2020, in which it announced its decision to imprison Hanin Hossam for 4 days pending investigations. The statement, which consisted of 13 pages, listed details relating to the investigations and its first session, in addition to indicating results related to the confiscated items, in a clear disregard for the confidentiality of the preliminary investigation, which is guaranteed by Article 75 of the Code of Criminal Procedure, which states that:

“Investigation judges, members of the Public Prosecution office, and their assistants, including writers, experts, and others who are connected to or attend the investigation because of their job or profession, must not divulge it, and those who violate this shall be punished according to Article 310 of the Penal Code.”

And so forth, the Public Prosecution starts an investigation because it has monitored widespread interaction between social media users, following that it presses loose and indefinable accusations; such as threatening the values of the Egyptian family because of sporadic demands instead of receiving an official report, based on Article 25 of the Information Technology Law, Finally, the prosecution announces – contrary to what is stipulated by the law – details of investigations, despite the confidentiality that is supposed to be applied at this stage of the case.

All of this came as a prelude to a form of prosecution, which includes a kind of pre-emptive punishment, whether by arbitrary detention, or by permitting defamation, and exposing the defendants to a number of violations, and treating them in contravention of the law in more than one situation, beginning with the stage of investigation and seizure, up to the criminal procedures in different stages of the case.

According to the official papers of the case, the investigations conducted by General Ahmed Taher Nur al-Din, Director of the External Activity Department at the General Administration for Moral Affairs, confirmed that the role of his administration is to “pursue those who use applications and websites to publish content that incites citizens, especially young people, to act contrary to customs and traditions, or to spread unethical thoughts and acts of immorality and debauchery in society.”[5]

Nashat Al-Daihi’s video, published on April 18, 2020, in which he demanded that the authorities arrest Hanin Hossam was how the police chief was able to identify her. Following a prosecution order, he arrested her on the evening of April 20 from her home, and seized her mobile phone and her laptop. The investigation report was written in the early hours of April 21st.

In contrast to the media campaign, with which the Public Prosecution’s statement agreed, which can be considered a form of defamation and stigmatization of female citizens who have not yet been convicted by a court ruling. A number of ambiguous procedures, legal violations occurred against Hanin Hussam and Mawaddah Al-Adham, since the beginning of their prosecution, with regard to arrest, habeas corpus, and pretrial detention.[6]

Nour El-Din confronted Hanin Hossam, with the result of his investigations, according to the official investigation report, in clear violation of his powers as a judicial control officer, according to Article 21 of the Criminal Procedure Law: “The judicial arrest officer searches for crimes and their perpetrators, and collects the necessary evidence for investigation and lawsuit.” Yet the officer at the Ministry of Interior gave himself the right to confront the defendant instead of the investigator, in addition to that he illegally examined the confisticated items (Hanin’s phone and her laptop) to confront her.

According to his statements in an official investigation report, the brigadier general asked for the pin code of Hanin’s phone, and opened her accounts, on social media applications, in addition to reading her conversations, on the WhatsApp application. This calls into question the integrity of the evidence and the discipline of pre-trial criminal procedures.

The seizure report is valid, according to Article 127 of the Criminal Procedure Code, when it includes “the suspect’s name, surname, industry, place of residence, the charge attributed to him, date of the order, the judge’s signature and the official seal”, which is absent from the arrest warrant of Hanin Hossam,[7] making it void, as she was arrested on April 20, 2021, before the investigation report was released the next day on April 21, according to which the arrest decision is supposed to be issued, indicating the existence of an intention to target the defendant.

In addition to the criminal procedures that took place in contravention the law, Hanin and Mawaddah’s case included a false procedure, which the investigator tried to implement, as he requested a virginity examination for the defendant, Mawaddah Al-Adham – an order that she refused – when investigating her for the violation of the Information Technology Law, by threatening the values of the Egyptian family, which gives an impression that personal morality is what drives those in charge of the Egyptian criminal justice system, instead of the law. On the other hand, the Public Prosecutor did not order an investigation into the leakage of private photos of Mawaddah Al-Adham, despite the infringement of the sanctity of her private life.[8]

Before the economic court

In July 2020, the first-degree ruling was issued in the Cairo Economic Court Case 479/2020, sentencing Hanin Hussam and Mawada Al-Adham and 3 others to two years imprisonment, with a fine of 300 thousand pounds for each of them. The court based its judgment on its confidence that the defendants violated both the Penal Code and the Information Technology Law. The text of the reasoning for the verdict stated:

“Every father and mother who bore upon themselves the responsibility to raise their children must be keen on their protection and upbringing to value preserving that nation, its principles and morals, and keeping them away from lies created falsely under the pretext of progress and open spaces that contain ideas and practices that appear to be development,  but they are in fact a path towards sin and moral decline.”

It is quite evident that the court based its verdict upon personal opinions and its own ethical considerations, when it considered the case, which included five defendants: Hanin and Mawaddah, the two main defendants, who were tried on the pretext of threatening family values, while the rest of the defendants were men who were tried for being accomplices in the crime.

On January 12, 2021, after nearly 9 months of restricting their freedom, the Appeals Chamber of the Economic Court issued a final ruling acquitting Hanin Hussam and two others, while annulling the imprisonment verdict of Mawaddah Al-Adham and the director of her page, Ahmed Sameh, while upholding a fine for each of them of 300 thousand pounds. on charges of publishing obscene videos.[9]

Before the criminal court

The prosecution of Haneen and Mawada did not end with the Economic Court coming to an end, as the Public Prosecution referred them to trial, but this time before the Criminal Court, on charges of human trafficking, and of deceiving two girls of the age of 18 that they will provide them with  job opportunities to achieve a material profit through the feature of live broadcasting, and communication with other users, which is what Hanin described as a space for acquaintance and forming friendships, a matter not prohibited by law. The Egyptian legislation has a special law to combat human trafficking, but it does not include a definition of these crimes through electronic mediums, meaning that there is no reference in Law 64 of 2010 to the determinants of human trafficking via the Internet.

The Cairo Criminal Court, headed by Counselor Mohamed Ahmed El-Gendy, ordered the arrest of Hanin Hossam, for not attending the trial sessions three times, while on the other hand, Mawaddah Al-Adham was already under pretrial detention, as she remained in custody, and the final court ruling to cancel her detention was not implemented, so that the renewal Imprisoned pending the new case.[10]

Hanin Hossam was referred to trial because of a video clip, which the Public Prosecution considered an infringement to Egyptian family values and a form of incitement to practice fornication, in the context of her commission of the crime of human trafficking, and based on the investigations presented to it. However, the Economic Appeals Court did not take into account these accusations and investigations, and did not consider this video clip as incriminating evidence. Nevertheless, the prosecution relied on the same video clip in the indictment of Hanin Hussam again before the criminal court.

Article 1 of the Anti-Human Trafficking Law states that an organized criminal group is a group formed according to a specific hierarchy of at least three persons who work continuously or for a period of time with the aim of committing one or more specified crimes, including human trafficking crimes, in order to obtain material or moral benefit.

In this realm, it should be noted that the Egyptian judicial authority has dropped any criminal liability against the Chinese company that owns the application, which the Public Prosecution considered the platform that Hanin used to commit her crime, although if the accusations are correct, it would be logical to consider the company an accomplice or even a primary preparatory of the crime, due to the documented contract between it and Hanin, which gives the impression that the ongoing trial is not a prevention of the crime of human trafficking, but rather a punishment for an unusual digital activity that is not understood by the Egyptian authorities.