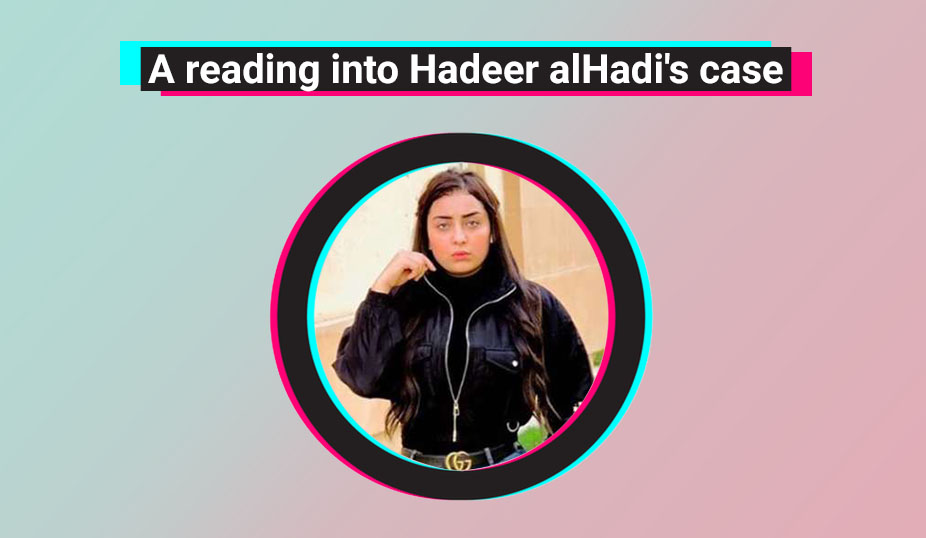 A reading into Hadeer alHadi’s case

Prepared by: Alaa Kulaib, researcher at the Association for Freedom of Thought and Expression’s Research Unit

This paper relies on the legal analysis of the documents of content creator Hadeer alHadi’s case, which carries No. 762 of 2020 (Cairo Economic Misdemeanour). The paper also relies on official data issued by the Public Prosecution, and media reports that tackled the case.

This paper comes as part of AFTE’s work to provide a legal analysis of what is known as the TikTok trials. AFTE has previously provided analyses of some of these cases.

Hadeer alHadi was arrested near Al-Hosari Mosque in the 6th of October City on 5 July 2020.

Prior to the ruling, lawyer Ashraf Farahat submitted several complaints to the Public Prosecution against female content creators, as part of a campaign aiming to impose moral guardianship on women[2]. As described by its founder, the campaign acted as moral police aiming to purify Egyptian society. Farahat filed other complaints against a number of female content creators, after they posted entertaining and dancing videos on social media.

The court indicted alHadi over charges of using social media with the aim of committing an indecent act that violates public modesty, violating the Egyptian family values, and promoting prostitution.[3]

The Public Prosecution issued an arrest warrant for alHadi and ordered the search of her home. It relied on police investigations, based on monitoring alHadi’s social media activity. alHadi has many followers on TikTok and Instagram, where she posts music and dancing videos in return for money. The investigation report stated that the police had spotted obscene videos of alHadi posted online. The case carried No. 712 of 2020 (October Gardens Misdemeanour).

After her arrest on 5 July 2020, police forces took alHadi to her home where they seized her filming devices and credit card. She faced charges of posting indecent photos and videos of herself.

During the investigations, the Criminal Evidence Department denied that the videos belonged to alHadi.

The prosecutor requested the passcode of alHadi’s mobile phone during the investigations, and then searched the photos, videos, and personal conversations on her phone. A police officer had earlier seized alHadi’s phone, according to the report attached to the case documents.

The case papers show that the photos and videos the Public Prosecution faced alHadi with were not posted on social media, but were stored on her mobile phone.

Article 54 of the constitution stipulates that “personal freedom is a natural right which is safeguarded and cannot be infringed upon. Except in cases of in flagrante delicto, citizens may only be apprehended, searched, arrested, or have their freedoms restricted by a causal judicial warrant necessitated by an investigation”. Any assault on personal freedoms or sanctity of the life of citizens is a crime with no statute of limitations, according to Article 99 of the constitution.[5]

Article 57 of the constitution also states that “private life is inviolable, safeguarded and may not be infringed upon. Telegraph, postal, and electronic correspondence, telephone calls, and other forms of communication are inviolable, their confidentiality is guaranteed and they may only be confiscated, examined or monitored by causal judicial order, for a limited period of time, and in cases specified by the law”.

During the investigations, the Public Prosecution found out that the accounts attributed to alHadi do indeed belong to her. Although it was not proven that indecent materials were posted on these accounts at the time of examination, the prosecution accused alHadi of outraging public modesty based on videos deleted from her official accounts on social media. Deleted clips cannot be considered as digital evidence, as this violates the law on combatting information technology crimes.

Meanwhile, alHadi denied any link to the obscene videos the prosecution faced her with. alHadi’s lawyer did not attend the first session of investigation, although there was no exceptional reason to investigate her without the presence of her lawyer.

The Public Prosecution charged alHadi with promoting prostitution and making money from publishing indecent videos, based on financial transfers to alHadi from individuals in different countries. alHadi said she had received money from the company that owns Likee, and also from her followers on social media in order to support her.

The Public Prosecution charged alHadi with the following:

The Public Prosecution demanded that alHadi be punished according to the following legal texts:

The trial: Violation of Egyptian family values ​​leads to prison

The Public Prosecution referred alHadi’s case to the Economic Court on 14 September 2020, pending investigation into Case No. 762 of 2020 (Cairo Economic Misdemeanour). The Economic Court sentenced alHadi to two years in prison, ordered her to pay a fine of 100,000 pounds, and placed her under police surveillance for a period equivalent to the length of the sentence. After an appeal was filed, the Economic Court of Appeal upheld the previous ruling on 7 April 2021.

In its ruling, the Economic Court of Appeal upheld the charges the Public Prosecution levelled against alHadi. However, it ignored alHadi’s argument that she received money from the company that owns Likee, but did not promote prostitution.

On the other hand, the investigations conducted by the Department of Combating Illegal Migration and Human Trafficking revealed that alHadi did not exploit other girls for any benefit or gain through her online activity, although she invited many girls to subscribe to Likee and make money from it. Therefore, the prosecution did not charge her with human trafficking.

The charge of violating the Egyptian family values contains an unspecified term, according to which convictions are subject to the judge’s opinion. The accusations based on the law on combatting prostitution do not take into account the great technological and digital development the world has witnessed, and the fact that content creators get financial returns for the viewership rates they achieve.

AFTE calls on the presidential pardon committee to include the youths involved in the TikTok trials in the amnesty lists that will be issued by the President of the Republic in accordance with his powers stipulated in Article 155 of the constitution. The arbitrary rulings issued in the TikTok trials violate the women’s right to freedom of expression.