Waiting for a presidential pardon for detained journalist Mohamed Oxygen

Second: Oxygen is under prosecution.. Four cases and a final prison sentence

Third: Violations inside his prison

This report is based on the legal reading of the reasoning of the Emergency Supreme State Security Misdemeanors Court’s ruling in Case No. 1228 of 2021, in which journalist Mohamed Oxygen was sentenced to four years in prison. The report is also based on the comments of the Association for Freedom of Thought and Expression’s lawyer who was assigned to attend the trial sessions, in addition to a number of press reports, statements of human rights organizations interested in the issue, testimonies of Oxygen’s family, and the reports and telegraphs that were submitted during the course of the various cases into which Oxygen was recycled and detained before a court ruling was issued against him.

Blogger and journalist Mohamed Ibrahim Mohamed Radwan, aka Mohamed Oxygen, has been in prison for three years, apparently as a punishment for the spread and influence of his personal blog “Egypt Oxygen”. The blog, known for its graphic press coverage, usually disturbs the security authorities which in recent years have sought to spread and impose its official account of all events taking place in Egypt, and suppress, exclude or marginalize any different narrative.

Oxygen is serving a four-year prison sentence for spreading false news that would harm the country, in Case No. 1356 of 2019 (Emergency Supreme State Security).

This report tries to track the multiple security prosecutions which Oxygen has faced since 2018, detailing the flagrant violations of the right to freedom of expression. It calls on the presidential pardon committee, the head of the Journalists Syndicate, and the National Council for Human Rights to intervene to release Oxygen. 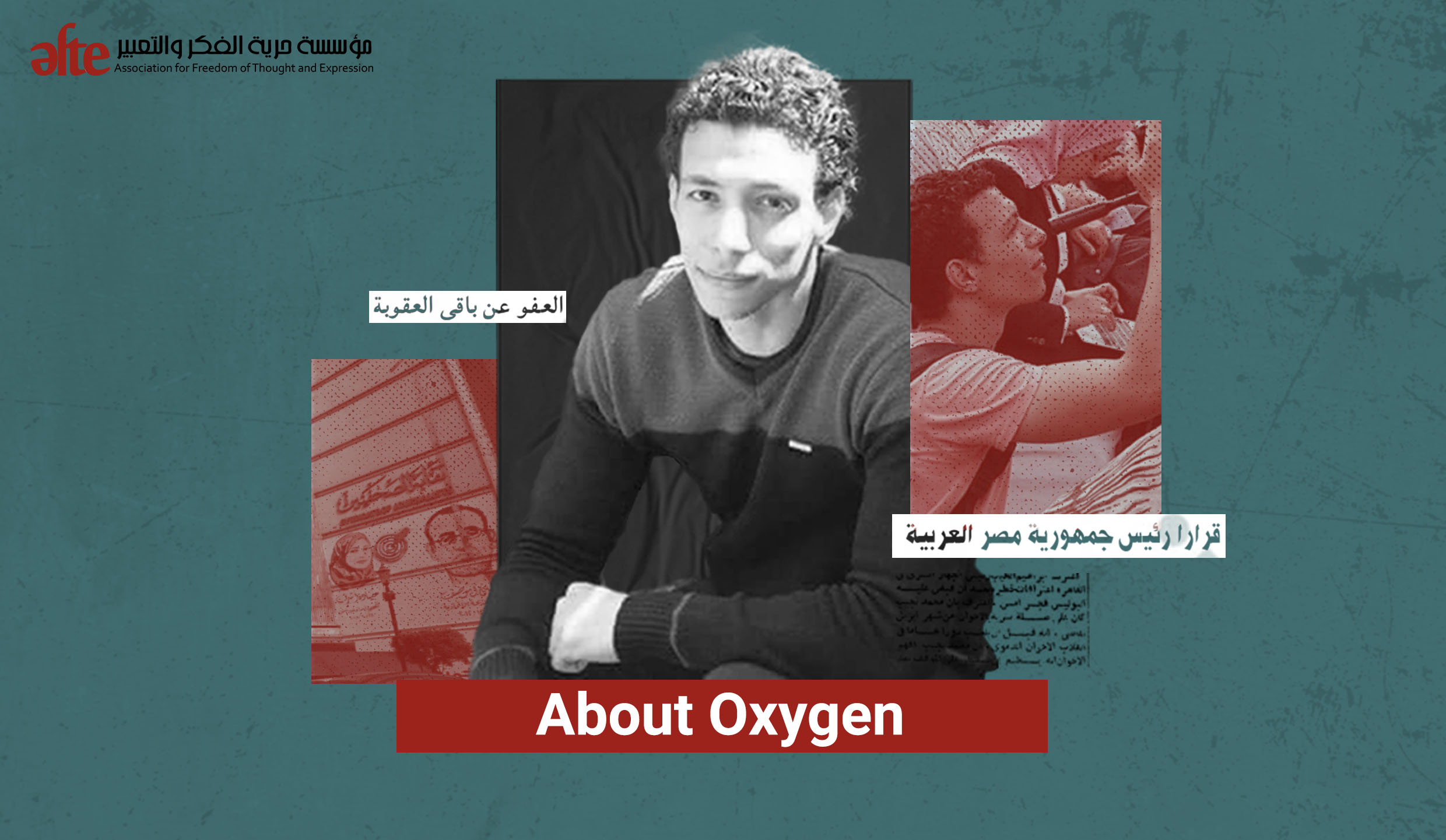 Mohamed Ibrahim Mohamed Radwan, better known as Mohamed Oxygen, is an Egyptian blogger and journalist. He was born on 1 January 1986, and graduated from the Workers University in Cairo.

Oxygen worked as an employee for an Egyptian publishing house, and was one young bloggers who participated in the 25 January 2011 revolution. During the months that preceded the revolution, Oxygen adopted a self-help independent journalistic project. In 2010, he created a blog entitled “Egypt Oxygen”, whose slogan was: “We carry the truth to you.”

He became known as Oxygen because of his blog that spread widely. He covered events and relayed them with his camera. He has 389,000 followers on YouTube and 307,000 on Facebook.

Oxygen’s YouTube channel and blog played a qualitative role in reporting on the conditions, concerns, and demands of the public, in an attempt to convey their voices to those who are concerned.

Second: Oxygen is under prosecution.. Four cases and a final prison sentence 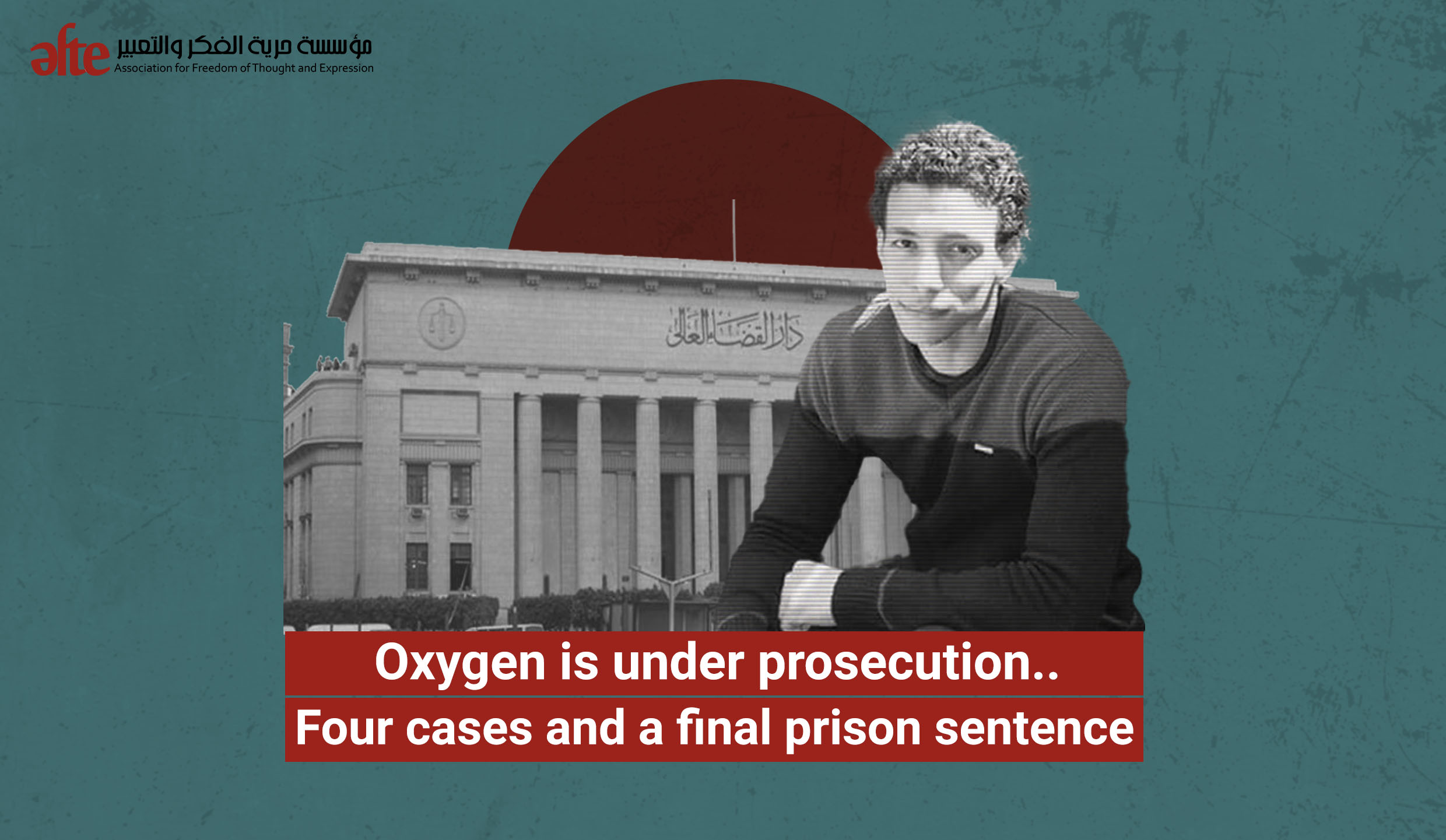 The case of Oxygen is an example of the blatant violation of the basic rights guaranteed by the constitution, as well as the international treaties that Egypt has signed and complied with, which have the force of law. These include the right to freedom of journalism, freedom of digital expression, and the right to a fair trial.

Oxygen was arrested against the backdrop of the video reports he posted on his blog. During his detention, he was subjected to torture and ill-treatment and was kept in pretrial detention for long periods of time despite the lack of legal justifications for that. Oxygen was also recycled into three different cases, from inside his prison, before being referred to trial before an exceptional court which issued a final, non-appealable four-year prison sentence against him.

At 3 a.m. on 6 April 2018, a National Security police force arrested Oxygen from his home in the Basateen neighbourhood in Cairo. He was taken to an unknown location and denied access to his family and lawyer. On 17 April 2018, he appeared before the Supreme State Security Prosecution in the Fifth Settlement, in Case No. 621 of 2018 (Supreme State Security Prosecution). He faced charges of spreading false news and joining a terrorist group.

During his detention, Oxygen was subjected to torture at the National Security headquarters in Abbasiya, which he proved during the interrogation sessions. He remained in pretrial detention – in solitary confinement most of the time – for nearly 15 months.

On 22 July 2019, the Criminal Court decided to replace Oxygen’s pretrial detention with a precautionary measure, according to which he had to go to the Basateen Police Station twice a week.

While implementing the precautionary measure at the Basateen Police Station on 21 September 2019, Oxygen informed the director of the Arab Network for Human Rights Information, lawyer Gamal Eid, over the phone that a National Security police officer came to take him to the National Security headquarters in Maadi, then his mobile phone was switched off. Although three telegraphs were sent to the Public Prosecutor, the Minister of Interior and the Minister of Justice, no investigation was conducted in this regard. Oxygen remained under enforced disappearance for nearly 18 days, until he appeared before the Supreme State Security Prosecution on 8 October 2019, in connection with a new case No. 1356 of 2019 (Supreme State Security Prosecution), in which he faced the same charges he faced in the previous case. He remained in pretrial detention for 14 months until the Criminal Court issued a decision on 3 November 2020 replacing his pretrial detention with a precautionary measure.

The arrest of Oxygen came as part of a fierce security campaign launched by the security services in Egypt against the backdrop of what was known at the time as the “20 September 2019 protests” called for by Egyptian self-exiled businessman Mohamed Ali. Oxygen was among the journalists who covered those protests in more than one governorate. Other journalists, activists, lawyers and human rights defenders were also arrested during the campaign.

The Ministry of Interior refused to implement the release decision, thus keeping Oxygen in detention in violation of the law until 10 November 2020, when his lawyers were surprised that he was referred to the Supreme State Security Prosecution for the third time, in Case No. 855 of 2020 (Supreme State Security Prosecution). The investigation into this case was carried out while Oxygen was in his cell in Maximum Security Prison 2, in what was known as “recycling from inside the prison”. The case also involved rights lawyer Mohamed Al-Baqer, and they faced charges of spreading false news that would harm the country.

On 16 October 2021, Oxygen was referred to trial in Case No. 1228 of 2021 before the Emergency State Security Misdemeanour Court. According to Oxygen’s lawyer, the case was copied from Case No. 1356 of 2019 (Supreme State Security Prosecution). The first trial session was held on 18 October 2021. On 20 December 2021, the court sentenced political activist Alaa Abdel-Fattah to five years in prison, and Mohamed Al-Baqer and Oxygen to four years each.

Oxygen was arrested for the first time in April 2018, and he remained in pretrial detention for 16 months before being released under precautionary measures in July 2019. Then he was arrested again less than two months later while implementing precautionary measures at the Basateen Police Station in September 2019. He remained in pretrial detention for 25 consecutive months, during which he was recycled into two different cases, and the Ministry of Interior refused to implement a decision to release him before he was referred to the court in October 2021.

Despite the prolonged and illegal pretrial detention of Oxygen, his trial was hasty and unjustified. The trial took only two months that saw only two procedural sessions, a session for pleadings, and a final session to announce the verdict. Although the rulings issued by the Emergency Supreme State Security Court are final and cannot be appealed, the President of the Republic has the right to annul or amend them, or order a retrial.

The speed of the trial was one of the violations of the right to a fair trial. Over the course of three sessions, the court did not listen to the defendant’s lawyer or respond to his requests. It also refused to allow the detainees to consult with their lawyers, and prevented lawyers from obtaining a photocopy of the case file. Moreover, none of the three defendants was faced with any piece of evidence proving the accusations levelled against them. The court did not also allow international observers to attend the sessions, despite the fact that they were public sessions in accordance with the constitution.

The referral of civilians to emergency courts violates Article 4 of the International Covenant on Civil and Political Rights, except in specific exceptional cases that do not conflict with the legal obligations of the state. Judgments issued by the Supreme State Security Court are final and not subject to appeal through any other degrees of litigation, something which constitutes a flagrant violation of the citizens’ right to a fair trial.

Third: Violations inside his prison 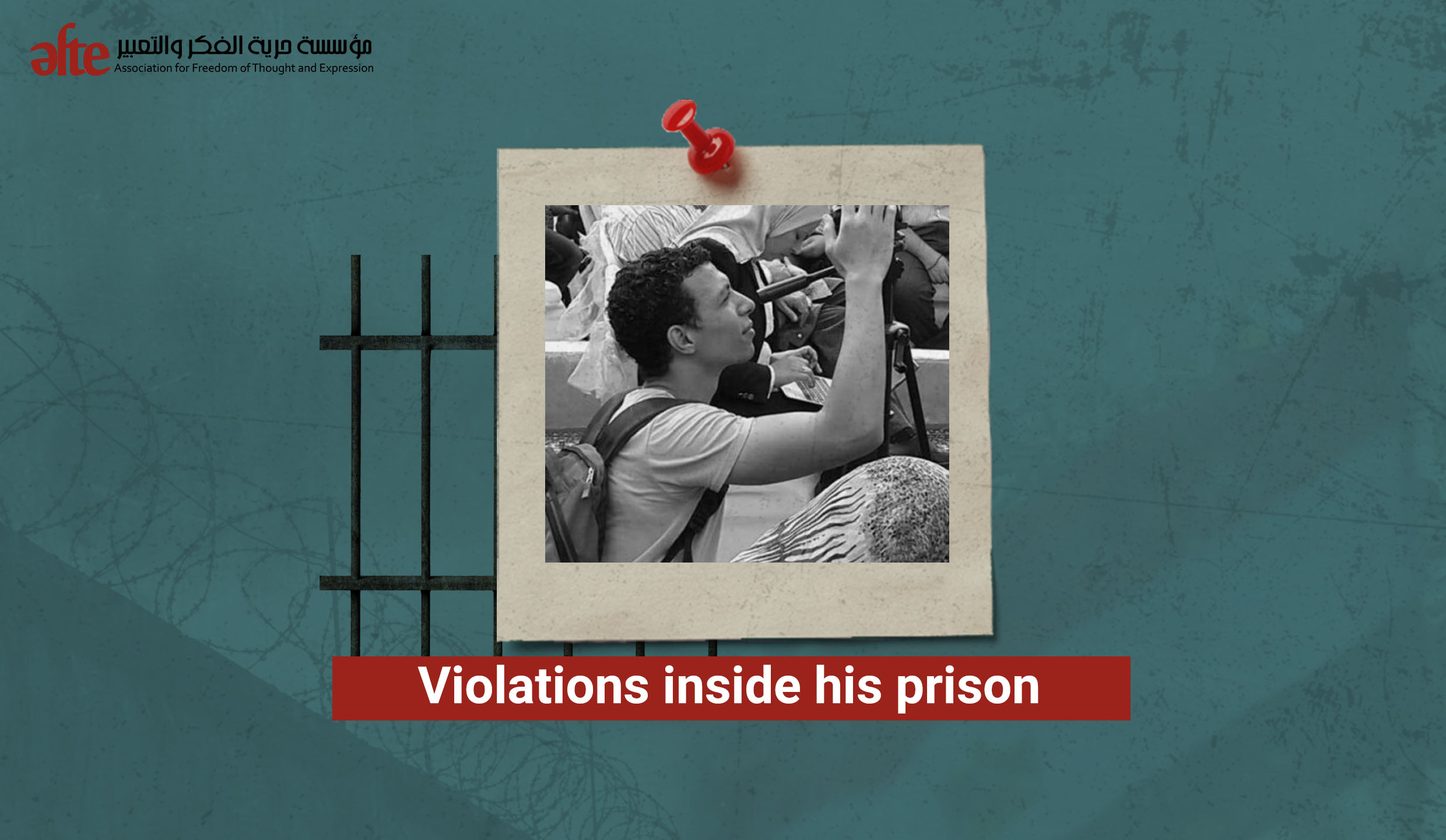 Oxygen has been subjected to various forms of abuse inside his prison, all of them represented grave violations of the prisoners’ rights guaranteed by the Regulation of Prisons Law and its executive regulations, as well as the international treaties binding on Egypt in the field of protecting the rights of prisoners.

Oxygen has been permanently banned from visitation since February 2020, without giving reasons or responding to his family and lawyer’s requests.

The prison administration also rejected a request by Oxygen’s family to deposit a sum of money in his account in the prison’s canteen. It also denied him access to medicines until 15 July, when his family was able to bring him food for the first time since February 2020, without seeing him.

Oxygen is subjected to abuse inside his prison (cell 3/2-B), whether by denying him visits, depriving him of fresh meals – unlike other prisoners, inspecting his cell constantly, and depriving him of exercise. The prolonged abuse of Oxygen caused him to suffer severe depression and abstention from speaking for nearly a month and a half. So, he became completely isolated inside his cell despite the presence of two other inmates with him, according to a former detainee who refused to be named for security reasons.

The constant threatening and abuse prompted Oxygen to try to commit suicide using medical drugs inside the prison, but he was saved at the last moment. This could be repeated as long as the poor conditions of detention persist and unless the Public Prosecution moves to stop these grave violations against him.

In February 2022, Oxygen’s mother died. Lawyers, writers and bloggers launched the hashtag “Allow Oxygen to bury his mother”, demanding that he be allowed to bid farewell to his mother and receive condolences, but he refused to leave the prison. This reflected the level of extreme despair that Oxygen has reached due to the isolation imposed on him, the death of his mother, and his suicide attempt.

The Association for Freedom of Thought and Expression (AFTE) releases this report to mark three years since Oxygen was detained, in order to show the extent of violations committed against him and to demand an end to the restriction of his freedom and prosecution over his journalistic work.

AFTE calls on all concerned parties, including the Presidency of the Republic and the Public Prosecutor, to put an end to these violations. It also calls on the Journalists Syndicate, the National Council for Human Rights, and the presidential pardon committee to intervene immediately to release Oxygen.