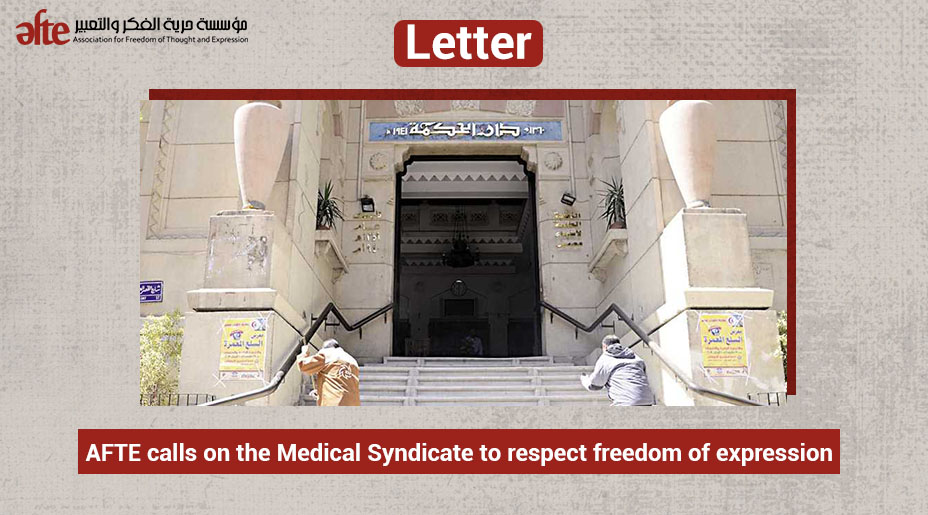 AFTE calls on the Medical Syndicate to respect freedom of expression

Dear head of the Medical Syndicate Dr. Hussein Khairy, and members of the Syndicate’s Council,

The Association for Freedom of Thought and Expression (AFTE) has followed up on complaint No. 176772 submitted by the Medical Syndicate to Public Prosecutor Hamada El-Sawy against sports journalist and former football player Ahmed Hossam (Mido). The complaint accused Mido of insulting and slandering Egyptian doctors, accusing them of neglect and lack of conscience by recounting incidents with the aim of inciting Egyptian society against doctors, in addition to insulting state institutions, disturbing public peace, and harming the public interest. In his complaint, head of the Medical Syndicate Dr. Hussein Khairy demanded that Mido be investigated over the aforementioned accusations, which are punishable by the law.

AFTE believes that the Syndicate was mistaken when it prosecuted Mido over personal opinions and legitimate criticism of the medical sector in Egypt that did not carry any incitement against doctors. Rather, some of the Syndicate members agreed with many of the points that Mido raised regarding the health system.

AFTE calls on the Medical Syndicate not to get involved in inciting decisions that limit freedom of expression or creativity, especially as we have noticed a recurring pattern of complaints about statements or actions that were not to the Syndicate’s liking. In April 2022, the Syndicate got angry at a TV ad by Dice Sport and Casual Wear and submitted a complaint to the Supreme Council for Media Regulation (SCMR), requesting it to ban the ad. The SCMR said in a statement that the ad had angered the public, especially the Medical Syndicate.

AFTE warns that such measures would harm the freedom of thought and expression that is protected by Article 65 of the Egyptian constitution, which stipulates that “freedom of thought and opinion is guaranteed, and all individuals have the right to express their opinion through speech, writing, imagery, or any other means of expression and publication”. Also, Article 19 of the International Covenant on Civil and Political Rights states that “everyone shall have the right to freedom of expression; this right shall include freedom to seek, receive and impart information and ideas of all kinds, regardless of frontiers, either orally, in writing or print, in the form of art, or through any other media of his choice.”

AFTE reiterates its firm position on issues of freedom of opinion and expression, and reminds the Medical Syndicate’s Council of the hardship of the security measures and restrictions that were practiced against doctors and members of the Syndicate at the beginning of the outbreak of the Covid-19 pandemic, which led to the imprisonment of a number of doctors and Syndicate members who expressed their opinions and criticized the health ministry’s policy in confronting the pandemic. The Syndicate resorts to the same measures to suppress dissenting opinions, instead of supporting freedom of expression and acknowledging that it had previously suffered from policies of prevention and intimidation. The Syndicate should instead support Mido in his legitimate criticisms, encourage others to express their opinions, and respond to them in the event that it has different opinions.

AFTE calls on the Medical Syndicate and its head to review their position on Mido’s statements, withdraw the complaints they submitted against him, and to discuss the criticism objectively, thus enriching the climate of freedom of opinion and opening new spaces for discussion and expression, away from security punishment.