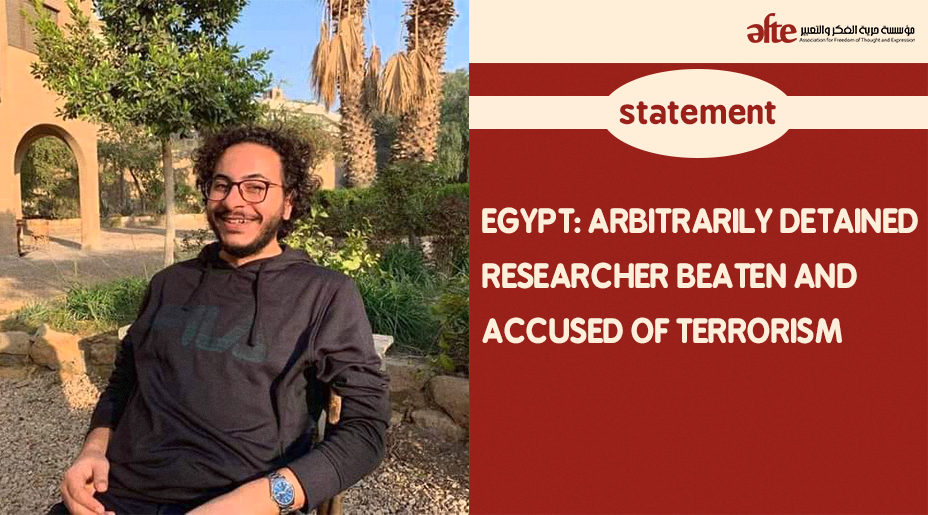 The undersigned organizations condemn new criminal investigations against researcher Ahmed Samir Santawy and his ongoing arbitrary detention, which stems from his academic work on women’s sexual and reproductive rights. We are alarmed by reports that Ahmed Samir Santawy had been subjected to beatings in prison and call on the authorities to open prompt and effective investigations. We also urge on the Egyptian authorities to immediately and unconditionally release Ahmed Samir Santawy, and to allow him to travel to continue his master’s studies at the Central European University (CEU) in Austria.

On 22 May 2021, the Supreme State Security Prosecution (SSSP) questioned Ahmed Samir Santawy in case No. 877/2021 of the SSSP in relation to accusations of joining a terrorist group and spreading false news within Egypt and from abroad with the aim of endangering national security and public order. Ahmed Samir Santawy has already been in pre-trial detention since 6 February 2021 pending investigations into a different case (No. 65/2021 of the SSSP) over similar unfounded charges. This practice of opening new investigations against individuals in pre-trial detention into similar terrorism-related charges, is commonly referred to as “rotation”. It has been increasingly used in recent months in Egypt against detained peaceful critics and opponents with the apparent aim of keeping them behind bars indefinitely.

Ahmed Samir Santawy has been arbitrarily detained since 1 February 2021 without being formally charged. National Security Agency officers and SSSP prosecutors had questioned him about his research findings on women’s reproductive rights including access to abortion. On 22 May 2021, the SSSP prosecutors confronted him with a technical report that they claim establishes that he authored social media posts criticizing conditions of detention and deaths in in custody in suspicious circumstances in Egyptian prisons. The SSSP failed to share the technical report with Ahmed Samir Santawy and his lawyers despite several requests. While he denies authoring the posts in question, the peaceful expression of criticism of the government’s human rights record is protected under the Egyptian Constitution and international human rights law.

During the hearing on 22 May 2021 before the SSSP, Ahmed Samir Santawy told prosecutors that he had been beaten by the deputy warden of Liman Tora prison, the previous day. His lawyers requested his transfer to the Forensic Medical Authority to examine his injuries. The family of Zyad el- Elaimy, former parliamentarian and human rights lawyer arbitrarily detained in Liman Tora solely for his peaceful political activities and expression of his opinions, also lodged a complaint with the public prosecutor about prison officials’ beating Zyad el-Elaimy and Ahmed Samir Santawy on 21 May. On 25 May, the Ministry of Interior denied the allegations which it attributed to media channels supportive of the outlawed Muslim Brotherhood. No investigations have been conducted into these claims, as well as Ahmed Samir Santawy’s previous complaints to prosecutors of being subjected to enforced disappearance, torture and other ill-treatment following his arrest on 1 February 2021 by the National Security Agency.

The undersigned organizations call on the Egyptian authorities to conduct prompt, impartial, independent and effective investigations into Ahmed Samir Santawy’s allegations of being subjected to enforced disappearance, arbitrary detention, torture and other ill-treatment, with a view to bringing those responsible to justice. Pending his release, the authorities must protect him from torture and other ill-treatment and ensure that he has regular access to his family, lawyers and adequate medical care.

Update: On 28 May 2021, the SSSP informed Ahmed Samir Santawy’s lawyers that he had been referred to trial over the charge of “spreading false news from abroad regarding the domestic situation in Egypt” in the second case to an Emergency State Security Court (ESSC) and the court set the date of the first hearing on 1 June 2021. Neither Ahmed Samir Santawy nor his lawyers have been able to examine the casefile and charges against him in full so far.

ESSC are special courts that operate when the state of emergency is in force. Their verdicts cannot be appealed and are only subject to authorization by the President to become final. It remains unclear which articles he has been indicted for.

We the undersigned organizations are calling on the Egyptian authorities to immediately and unconditionally release Ahmed Samir Santawy as his arrest, detention and trial stem solely from his academic interests. Further, he is currently facing a trial solely on the basis of social media posts that do not include any incitement to hatred or violence and are therefore protected under the right to freedom of expression.

Ahmed Samir Santawy’s arrest comes against the backdrop of the Egyptian authorities’ unrelenting crackdown on the rights to freedom of expression, association and peaceful assembly with independent researchers and academics among those targeted.  At least four academics continue to be held in pre-trial detention over unfounded accusations of involvement in terrorism, threatening national security or spreading false news.