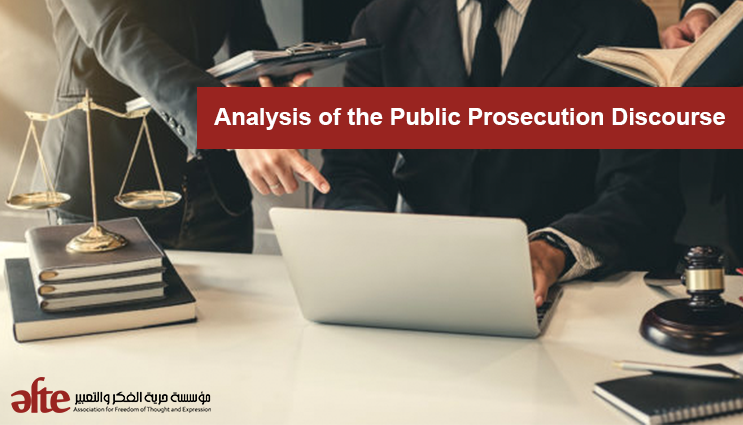 Lawsuits are supposed to be filed based on a penal law, whereby the police charge someone, then the Public Prosecution refers the accused to the investigating judge, who – in turn – looks into the charges to make sure they are logical and the evidence provided is solid. After that, the Public Prosecution determines articles from the penal laws, under which the defendant will be tried.

However, with the emergence of what is known as TikTok cases, in which some content creators have been tried on charges of infringing on Egyptian family values ​​and spreading immorality and debauchery, the Public Prosecution has outlined a new role for itself. It has become an ethical guide, having the right to impose mass surveillance on internet users, under the pretext of protecting what it calls “cyber borders”.

In 2019, the Public Prosecution decided to reformulate its public presence in line with the public movements in the new cyberspace and on social media. This came after President Abdel Fattah al-Sisi appointed the head of Cairo Court of Appeal, Hamada al-Sawy, as a public prosecutor[1]. Sawy assumed his post officially on 19 September 2019, only one day before the scheduled protests called for by exiled businessman Mohamed Ali. Following these protests, the Public Prosecution questioned at least 1920 people from 18 governorates.[2]

On 28 September, the Public Prosecutor’s office announced in a statement the launch of extensive investigations into “incitement to demonstrations in public squares and streets”[3]. It ignored the citizens’ right to organize demonstrations, which is guaranteed by Article 73 of the Egyptian constitution. This shows how the Public Prosecution is hostile to the use of the internet to express political opinions critical of the current ruling system.

The prosecution said in the same statement that it monitors the defendants’ social media accounts. It noted that it seeks the help of experts from the Ministry of Interior’s department of combating cybercrimes to inventory the defendants’ social media pages and accounts, in preparation for taking legal action against them, as stipulated in the Law on Combating Information Technology Crimes. These interventions by the prosecution violate the right to freedom of expression guaranteed by Article 65 of the constitution, which states that freedom of thought and opinion is guaranteed, and that every person shall have the right to express his/her opinion verbally, in writing, through imagery, or by any other means of expression and publication. On 12 November 2019, the Public Prosecutor created a new department of “communication, guidance and social media” in his office.[4]

The new department consists of three main units; the first is for social communication, the second for electronic and social media, and the third for monitoring and analysis. 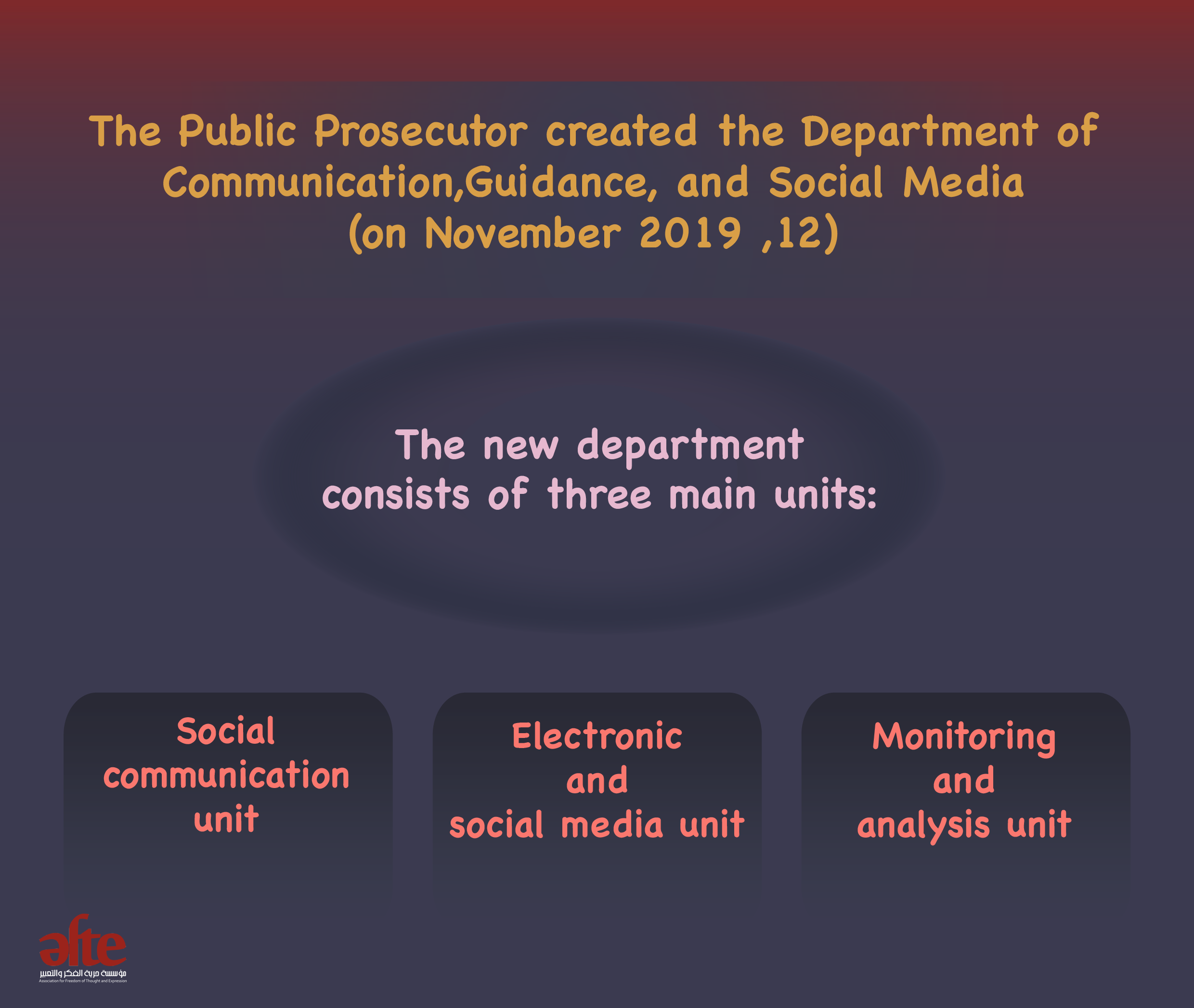 The department is undertaken by one of the Public Prosecution members with the rank of solicitor-general or higher, an unspecified number of prosecutors, in addition to a number of specialized employees. It is not clear, however, whether those employees are specialized in electronic or digital domains. The Public Prosecution began to publish news and updates on key cases on its official accounts on social media. These included lawsuits it has filed, cases it has undertaken, and related comments.

According to the Public Prosecutor’s decision, the monitoring and analysis unit is concerned with monitoring all prosecution-related news that is published in the mainstream and social media. The unit also monitors and analyzes comments and opinions on that news, and accordingly issues statements or responds with comments. The Public Prosecutor’s decision did not clarify how the unit undertakes the monitoring and analysis process, nor did it clarify whether those who undertake that role are Public Prosecution members or specialized employees. It did not even make it clear whether the specialization of those employees allows them to monitor the activities of social media users. 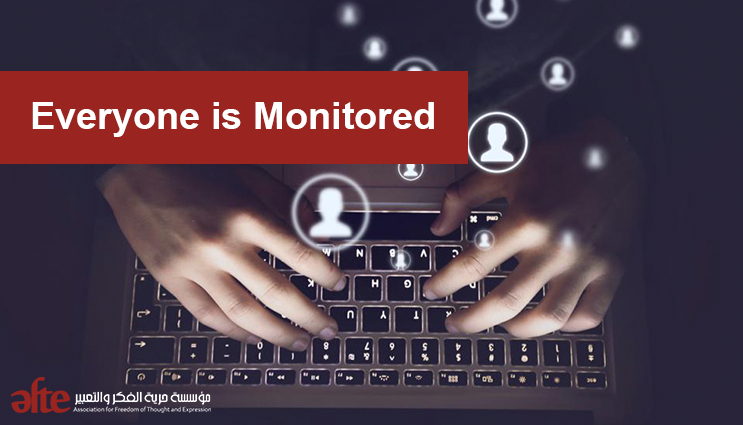 The Public Prosecution announced in an official statement that “a fourth type of national border – other than the land, air and maritime borders – has emerged, which inevitably leads us to introduce radical changes in the policy of legislation and judicial powers, as we are facing new cyber borders on the internet”[5]. This announcement was not immediately issued after the health ministry’s website was hacked in February 2020, where Iranian hackers posted a message telling visitors of the website that “We are closer to you … and we know your identity”.[6]

However, the announcement was made on 2 May 2020, following a joint campaign the Public Prosecution and the police launched against some social media users, especially TikTok users, for allegedly inciting immorality and debauchery[7]. The prosecution said the new cyber borders need deterrence and precautionary measures to guard them. “This guardianship is not to track people, disturb their privacy, or to restrict freedoms, but rather to address crimes that take place through the cyberspace that exploit people and drag girls into prostitution, exploiting their vulnerability and social hardships,” according to the Public Prosecution’s statement.

The Public Prosecution’s discourse established the necessity for it to play a monitoring role, under the pretext of “protecting the borders”, which makes receiving reports and complaints insufficient. Therefore, the prosecution believes that it is necessary for it to assume this new role of monitoring and control in order to protect Egypt’s borders, instead of being satisfied with its actual role of investigating cases and filing lawsuits. This is evidenced by the prosecution’s repeated indication in its statements that it has started an investigation into a certain case, after it observed “widespread interaction by social media users” and after its “official Facebook page received several demands” to interrogate a certain defendant.[8]

Instead of looking into the complaints it receives from citizens via social media, the Public Prosecution decided to resort to random mass monitoring as well. In the TikTok cases, it did not file the lawsuit based on a clear complaint from the victim, but it relied on the “communication, guidance and social media” department and its conclusion that there was a reason for investigating the case and monitoring user content.

In its first statement about the threat to the Egyptian family values, the Public Prosecution said that it monitored the interaction of citizens and received complaints about the content provided by Haneen Hossam, the first defendant detained for her posts on TikTok[9]. Although the prosecution said in its statement that it acted upon a complaint it had received, it did not reveal who filed the complaint. This shows how the Public Prosecution resorted to random monitoring of social media platforms[10]. Thus, it has taken over the task of criminal investigation instead of the police, which means that its powers have expanded to include special powers granted to the executive authority, in addition to its original powers as a body of the judicial authority.[11]

The Public Prosecution has initiated TikTok lawsuits, not to delete the content in question, but rather to impose custodial penalties on content creators under the pretext of preserving the Egyptian family values. It called on all citizens to assume their national role in protecting the cyber borders, by “reporting what they deem suspicious and submitting complaints backed by evidence to the guards of justice in this country, including members of the Public Prosecution, security services, and competent state institutions”.[12]

When it comes to complaints, the Public Prosecution’s discourse motivates citizens to monitor and report on those whose actions are deemed violating the family and society values. Thus, the Public Prosecution monitors some citizens, while citizens monitor each other. Therefore, anyone may be prosecuted because of their threat to the Egyptian family values – which definitely vary according to each individual’s orientation and convictions – through their online activity.

Values ​​and morals rather than law

Given its new role of monitoring and analysis, the Public Prosecution said that one of its objectives is to work on “social guidance to prevent the causes of crimes and to achieve social security and peace in society”[13]. This is an additional role that the prosecution decided to play through its presence on social media. Its role is no longer limited to investigation and referral of cases to court, but it has extended to education using a religious, ethical discourse. In its statements, the prosecution urges citizens to adhere to morals and do what is right from its point of view.

Last year, police forces arrested eight content creators and three men, including two working for Likee. The Public Prosecution questioned them in separate cases related to the use of TikTok and Likee platforms[14]. Thus, the prosecution has become concerned with detecting and investigating cases and interrogating the defendants as well. This was clear in the successive statements issued by the Public Prosecution.

These statements contained a number of accusations and moral judgments, which subsequently led to collective stigmatization of citizens, some of whom were not finally convicted, and others were cleared of the charges levelled against them. Therefore, what was mentioned in the Public Prosecution’s statements can be considered a form of incitement and rumours targeting content creators, especially after news about them and their private lives were circulated in the media.

According to the constitution, the Public Prosecution is an integral part of the judiciary, which means that the law governs its functions and roles. The law does not differentiate between citizens on the basis of belief, but the Public Prosecution’s statements on TikTok cases contained Islamic religious texts. This was evident in the first statement the prosecution issued on Haneen Hossam on 23 April 2020. It began with the Quranic verse “Allah wants to accept your repentance, but those who follow [their] passions want you to digress [into] a great deviation”[15], in an attempt to convert the status of the defendants from the possibility of violating the law to violating the teachings of Islam.

Religious references have been repeated used in the Public Prosecution’s statements. These included hadiths of the Prophet, such as the one that says: “There is never any obscenity in a thing, but it mars it, and there is never any modesty in a thing, but it adorns it.[16]” This emphasizes that the prosecution issues prejudices not based on law, but rather on the dominant religion. Similar formulas and expressions have been repeatedly used in the Public Prosecution’s statements. These usually end with the phrase: “May God safeguard the homeland and protect it from the evils of sedition.” The Public Prosecution sees citizens as its children[17], imposing control on them with the aim of “controlling their exercise of freedoms and educating children and reminding adults of how to practice these freedoms”.

[4] Public Prosecutor’s Decision No. 2376 of 2019 to establishing the department of “communication, guidance and social media” in his office