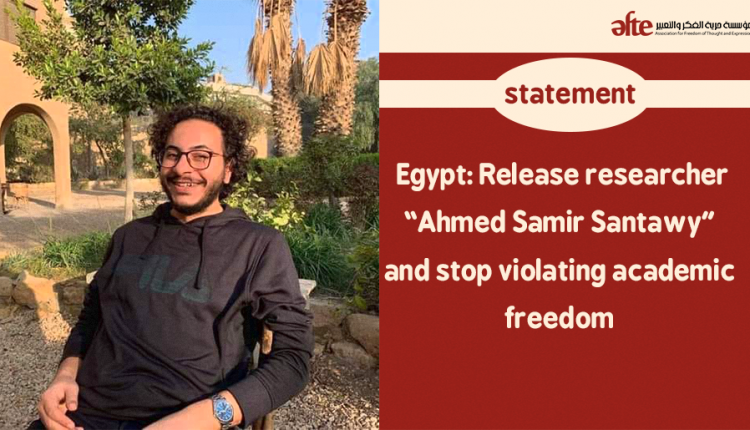 The undersigned organizations call on the Egyptian authorities to release Ahmed Samir Santawy, a master’s researcher at the Central European University (CEU) in Austria, who has been arbitrarily detained for two months and deprived of continuing his study in Austria. The organizations also call for an investigation into the enforced disappearance and beating of Santawy.

Police arrested Santawy on 1 February 2021, and the State Security Prosecution decided to remand him in custody in Case No. 65 of 2021 without solid evidence of indictment.

Santawy suffered from inhumane conditions of detention, including being denied communication with his relatives. He was also deprived of clothes and personal equipment for a month and eight days, before only one of his family members was allowed to visit him for 20 minutes.

Meanwhile, international condemnations of human rights violations by the Egyptian authorities have increased. A joint statement issued by the governments of 31 member states of the United Nations during the 46th session of the United Nations Human Rights Council condemned the deteriorating human rights situation in Egypt, especially the restrictions imposed on freedom of expression.

At least four academics are currently held in pretrial detention or under house arrest. They include Patrick George Zaki, a master’s researcher at the University of Bologna in Italy, who has been imprisoned for more than a year without completing interrogation with him or referring him to trial. They also include Hazem Hosni, a political science professor at Cairo University, who was released recently but was put under house arrest.

Moreover, the Egyptian security services refuse to allow Walid Salem, a doctoral researcher at the University of Washington, to travel to continue his study. Salem was imprisoned before because of his research on the judiciary in Egypt.

Santawy was charged with joining a terrorist group, financing terrorism, spreading false news, and using a social media account for that purpose. The prosecution just showed Santawy some screengrabs of posts on a Facebook account, but he denied his connection to that account.

The undersigned organizations call on the Egyptian authorities to stop violating academic freedom, enable Egyptian and foreign researchers to work freely, and guarantee their freedom of movement. They also stress the need to release Santawy and Zaki.